4 SIGMA EVENT IN THE GOLD:OIL RATIO – PLACE YOUR BETS 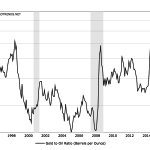 We have had many first’s in 2016, with the latest being the long standing record for the highest gold:oil ratio ever recorded. Currently at a 37 handle, an elevated ratio of how many barrels of oil an ounce of gold can procure “normally” portends danger. Prior spikes have served as tombstones for rocky times in global financial markets. The gold leg of this ratio is holding in fine (neutral from a statistical perspective, over a decade observation period), especially in light of the seemingly never ending strength in the USD, over the last 18 months in particular. The gold:oil ratio over the 1968-2016 period now has a 4 handle, measured in terms of standard deviation. A betting man would argue that the ratio resolves itself largely via a rally in oil from here (gold typically rallies with oil,  although one would expect at a slower pace given the weak tether). VaR based stress testing does have its limitations, admittedly, but 4 sigma events are “rare”. In terms of daily observations, a 4 std. dev. move would be observed once every 43 year (twice in a lifetime). Many risk management models both test and report to a 99% confidence interval which equates (on a 1-tailed basis, typically the cpty’s “risk leg”) to a 2.33 standard deviation move. History does not repeat, but it certainly does rhyme. Standard deviation readings of this magnitude lead one to question the normality of the distribution being studied and on this metric oil is also the squeaky wheel. ‘Fat tails” can only explain so much in the end and despite both the geopolitical and technological developments bringing the nitrous to the supply side of the equation, global oil demand still exceeds 1,000 gallons a second. Gold mining stocks have not been this cheap, on traditional valuation metrics, since gold was $300 per ounce. There appears to be a thumb on the scale. Place your bets. JCG

If you enjoy the content at iBankCoin, please follow us on Twitter
2016-01-18
firehorsecaper
Share
Previous BEER SELLS IN ALL MARKETS: ABIBB $46BLN – SEVEN TRANCHE DEBT DEAL
Next I.R.S. – THE LONG ARM OF THE LAW JUST GOT LONGER