18 years in Wall Street, left after finding out it was all horseshit. Founder/ Master and Commander: iBankCoin, finance news and commentary from the future.
Joined Nov 10, 2007
20,200 Blog Posts
@the_real_fly

How will the market respond to a Chesapeake bankruptcy? We might soon find out.

With nearly $12 billion in debt, CHK looks like a goner. Debt is trading at bankruptcy levels. Their credit is junk and the stock price is cornered into a ‘fag box.”

At the same time, we lowered the senior unsecured debt ratings to ‘CCC-‘ from ‘CCC+’. The ‘6’ recovery rating is unchanged, reflecting our expectation for negligible recovery (0% to 10%) in the event of a payment default.

In addition, we lowered the rating on the company’s first-lien senior secured debt to ‘B’ from ‘BB-‘. The recovery rating on this debt remains ‘1’, indicating our expectation for very high (90% to 100%) recovery in the event of a payment default. We also lowered the issue-level rating on the company’s second-lien notes to ‘B’ from ‘BB-‘ and placed them on CreditWatch with
negative implications, reflecting the potential for lower ratings if a revised PV-10 results in lower recovery expectations.

We also lowered our rating on the company’s preferred stock to ‘D’ from ‘CCC’ based on Chesapeake’s decision to suspend dividends, which we view as a default on the securities.

“The downgrade reflects the implementation of the recent change in our base case oil and natural gas price assumptions,” said Standard & Poor’s credit analyst Paul Harvey. We lowered our 2016, 2017, and long-term price assumptions for Henry Hub natural gas by over 15% and West Texas Intermediate (WTI) crude oil by about 20%%, which resulted in significantly weaker financial measures for Chesapeake, with funds from operations (FFO)/debt under 5% and debt/EBITDA well over 10x for the next two years. At such levels, we assess debt leverage as unsustainable. Based on our price assumptions, we expect only limited improvement in the near-term and that Chesapeake will face both a challenging operating environment and weak capital markets as about $2 billion of debt comes due in 2017. The downgrade of the preferred stock to ‘D’ reflects the suspension of dividends on that security, which we view as a default.

The negative CreditWatch placement of the second-lien notes reflects the potential that we could lower ratings on that debt class if a revised PV-10 results in lower recovery expectations.

The negative outlook reflects our expectation that financial measures will remain very weak over the next 24 months based on our natural gas and crude oil prices assumptions. Under these challenging conditions, we expect debt leverage to exceed 12x on average. Additionally, liquidity is likely to be challenged under these low prices, both from diminished cash flows and
potential reductions in the company’s borrowing base. Also, the negative outlook reflects the potential that Chesapeake could launch an exchange offer or other refinancing we would view as distressed, resulting in a selective default.

We could revise the rating outlook to stable if Chesapeake can address upcoming maturities and putable debt such that we assessed liquidity as adequate, and at the same time financial measures improved on a sustained basis such that FFO to debt was 5% or better and debt/EBITDA was below 10x. Both events are likely in conjunction with improving hydrocarbon prices, such that our natural gas price assumption exceeded $3.00 on a sustained basis.

If you enjoy the content at iBankCoin, please follow us on Twitter
2016-01-25
Dr. Fly
Share
Previous WHO ALERT: The Zika Virus is Coming and There’s No Cure
Next Surprise: The Shanghai Crashed Again; Global Markets Are Reeling 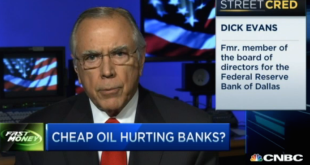