CRONKITE Wed Aug 6, 2014 9:20am EST Comments Off on Unintended Consequence

“The contributors are many as actors in the American Tragedy, to cause the systemic breakdown failed state. Faulty monetary policy, economic policy, and political policy have caused the resulting failure. The primary perpetrators are the central bankers, led by Greenspan and Bernanke. These two men have done more to destroy the USEconomy, the US financial structure, the US currency, than any two men of prominence. To be sure, the Bush, Clinton, and Rubin gang played a huge role in the collapse. Their supporting cast of destructive actors is very long, like the serial bank criminals residing on Wall Street. To be sure, the system itself has played a key role in the harmful factors. The two most apparent harmful resident factors are the strong US labor unions and the influential environmental movement, which together encouraged the vast outsourcing of US industry at first to the Pacific Rim, and then fanning across the developing world. Both workmen compensation and OSHEA regulations interfered with US cost settings, but not as much as USGovt corporate taxes. The textile industry went to India and Pakistan, even Bangladesh. Call centers went to India, Philippines, even Costa Rica. The culprits are too numerous to cite. 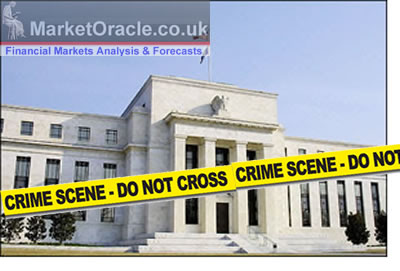 Corporations in general sought out any foreign nation with fewer rules, and weaker unions in which to conduct business at lower cost, with lower taxes and lower fences in regulatory oversight. In the last decade, the destruction of the US system, both financial and economic, has been in a greatly accelerated mode. Almost all actions by the USGovt to defend against defection and defiance have resulted in amplified reaction by the East in opposing the USDollar system and all its many features, devices, weapons, and subterfuge. The motive for actions taken are clearly in defense of the King Dollar Regime. The responses taken are clearly to reinstate the Gold Trade Standard and no longer deal with a toxic USDollar for trade and banking. The unintended consequences are uniform if not universal. The outcome will be to develop the Eastern Gold Trade Standard while the entire Western system crumbles, deteriorates, sinks, and implodes. Review a list of factors, events, and reactions, the common theme in unmistably fashion, is a tragedy extending from the original sin, breaking the Gold Standard. The United States has given the world two choices: war to defend the USDollar, versus work with Eastern Alliance toward the Gold Standard.

The nations of the world will choose commerce and trade eventually, and turn their backs on the United States. They will return to Gold. The BRICS nations will in the next several months possibly install a gold-backed currency for usage in the Eurasian Trade Zone and elsewhere. The threat of a Returned Gold Trade Standard is cause for war with the United States. Thus the series of wars, in hidden defense of the USDollar, with distractions galore on declared reasons of thin type. The BRICS Development Bank is a cover for a Gold Central Bank. The interference is universal by the USGovt and Wall Street bankers in control. They risk sinking the entire global economy in order to preserve power. Before they chose to prop insolvent banks, instead of liquidating them. Now they choose to wreck the global economy. They want global fascism, a veritable hell on earth.

– it took over a generation, but longest record for paper money currency was 33 years

– astonishing isolation is coming for the United States, as allies choose trade over war

2. Outsource industry starting in 1980 decade, using blinders on long-term effects. The gains were short-term while the damage is long-term. The outcome is a gutted USEconomy, absent legitimate income sources, steady deterioration, and systemic failure.

– the United States urgently requires a new chapter of re-industrialization

– US has run out of activated asset bubbles, housing last, stocks & bonds now

3. Chinese lease of Gold to Wall Street permitted the continued fiat paper USDollar game, with additional underpinnings in collateral declarations. The game was kept going another decade. The outcome is a more devastating transfer of US assets, for banks and commercial buildings, even farm property. The United States is on the verge of losing its sovereignty and becoming a vassal state.

– gold lease was reneged upon, due in 2007 probably, an expected default on gold return

– gold lease had collateral derivative contract behind it, from Wall Street assets

– Wall Street sold out the US population twice, once with MFN, twice with IRS bond

– in all likelihood, China has a significant stake in the Federal Reserve ownership

– China is exercising its collateral seizure rights directly and indirectly

– China is keeping the US propped up, so that it can convert its USTBond reserves

– results in a propped USTreasury Bond market with no integrity, fully controlled

– foreign financial entities respond by hedge against inflation, diversify out of USTBonds

5. Ukraine War, Iran sanctions, with Syrian adventure and Cyprus actions all had hidden motives. The real factors indicate extreme USDollar weakness. The outcome is isolation for the United States, recognition of war to defend the USDollar, and lost allies. The East will band together to formulate a USDollar alternative, based in a Gold Trade Standard.

– Cyprus was attack to obstruct Russian conversion of USTBonds to Gold

– Russia put on notice, their bank function through the Cyprus window was interfered

– Russia motivated to work with China, in further motivation to form USDollar alternative

– entire EU and NATO put at risk, both alliances to break apart, and isolate United States

– the Gold for Oil trade was developed as a working prototype, avoiding USD settlement

– Germany and France are the key nations for defection, choosing commerce over war

– Germany is under the microscope right here, right now

6. Post-Lehman lashing together of big Western banks was the defensive posture to prevent the weaker banks from faltering. The goal is short-term protection, while the long-term risk is systemic. The QE effect results in weaker economies, which assures the impact of bank failures. They have begun. The outcome is systemic failure of the big Western banks from contagion.

– all big Western banks are tied together, using derivatives

– lashing is shipping term, tying men with ropes around waist and ship masts during storms

– if any major banks fail, then risk of contagion is enormous and difficult to halt

– QE has many destinations, mortgage bonds obviously too, but also huge derivative supply

– harsh effect, QE undermines the economies which must keep the big banks afloat

– the big Western banks have been insolvent since 2007

– system cannot manage all the risks, like to intermediaries and mid-sized banks

– massive illiquidity in US banks has finally hit

7. Refusal to Repatriate German gold was a crime out of the gate. The motive was to conceal the appropriation (re-hypothecation) of German official gold accounts. The Germans are on notice of gold thefts by their own allies. Germany will work with the Eastern superpowers to develop a USDollar alternative and a Gold Trade Standard.

– Germany will leave the Euro, leave the EU, leave NATO, already been decided

– implementation is extremely complicated and will cause extreme bank losses

– critics overlook that Germany has two camps (commercial versus bank/politics)

8. NSA espionage has a false motive to protect from terrorism. The actual motive is to control communications, to monitor anti-USDollar activity, to follow Eurasian Trade Zone progress, and to steal corporate trade secrets. The outcome will be profound US isolation, if not quarantine.

– has both political side and corporate trade secret side, with terrorism smokescreen

– the US leadership has no allies, and sees only targets to control and exploit

– motivates acceleration of alternative to USD in trade and banking

9. Banker murders at middle level are hardly concealed anymore. They no longer appear as suicides. They have some common themes. The motive is to keep the rot concealed. The outcome is to reveal the pervasive widespread financial structure rot and systemic breakdown.

– arouses suspicion, attention, and investigation by the population

– when more than one or two cases, a pattern emerges

– JPMorgan has biggest common thread in murders, both bankers and insurance heads

– London bankers and Swiss insurance executives have been murdered

– executives, directors, board members all protected at higher level

– midlevel bankers carried out projects with all the dirty details

10. Punitive motivated prosecution of PNB Paribas, Credit Suisse, Deutsche Bank each has hidden motives at work. They are well concealed. The final chapter of D-Bank attacks will reveal duplicity and corrupted financial structures. The outcome will be to anger Germany, to expose hypocrisy, and to act in forcing the split of Germany away from the US camp.

– forced folding of CS under UBS, where thefts are ongoing by US Bankers

– forced folding of BNP under Societe Generale, which resides in the banker cabal

– Switzerland is a lost cause of deeply rooted fascist banker thieves