Alright, I’ve reached the conclusion that I won’t have time to sit down and just carve out the entire culmination of my thoughts on BXG and what drove me to buy the name. I don’t have the uninterrupted gap of time to make that happen – and it needs to get done.

So instead we’re taking the modular construction approach here; I’m carving this thing up into pieces and I’ll let you assemble it all when I’m done.

The introduction to the name is as follows: Bluegreen is a timeshare corporation. They weren’t always timeshare, they used to be just a regular real estate company of some kind, if I’m remembering, but then in the 90’s they got into timeshare in a big way. They sort of pioneered the modern timeshare concept, taking the real estate deed/title holder model but building an exchange based travel agency on top of it, so you could go to other owner’s properties at different times of the year – before, you were restricted to the destination you purchased at the time you purchased for.

Alright, so Bluegreen got absolutely rocked in 2008/2009. But they had some management changes and the operation was cleaned up spectacularly. I’ll get into that in more intricate detail later.

Now, the company presently has limited upside of $10 a share…exactly. That’s because the chairman of BXG, an, er…interesting figure by the name of Alan Levan with possible Jeffrey Fastow-type tendencies has accepted an all cash offer to take the company private from a financial group by the name of BankAtlantic Bankcorp (BFCF), which is also chaired by, um…Alan Levan. BFCF presently owns 51% of Bluegreen stock.

The offer was originally for 8 shares of BFCF for every 1 share of BXG, but that was headed for a complete shutdown so Levan changed the offer for what is now a pure cash play.

Now, in my next piece I’ll get more detailed on the possible developments I see with the offer and the company in a minute, but I’ll leave you with this to start: at the current $10 offer, with the stock trading for ~$9.80, there’s a simple arbitrage here that nets about 2%.

In my next post, I’ll argue that that’s probably the minimal outcome and explain what I’d rather see happen. 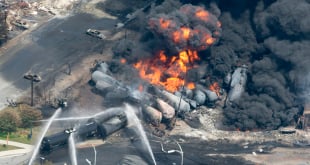