Here’s What Happens When Your Cash Flow Doesn’t Add

Since the markets are closed to accomodate people who like to skip work, I’m stuck here with nothing to distract me from the pile of paperwork that’s been building up since early December. Bother…

However, for those of you who aren’t given any fake holidays to play hooky with, here’s some light reading to keep you entertained.

And that is what happens when you play fast and loose with debt, trying to be all things to all people. 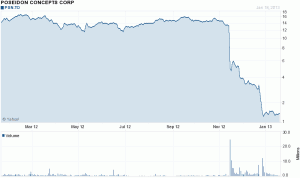 END_OF_DOCUMENT_TOKEN_TO_BE_REPLACED

Just a quick recap from a few months ago, here are some comments I made concerning one PSN.TO.

And here’s why I wasn’t going to touch Poseidon Concepts with any of my money: 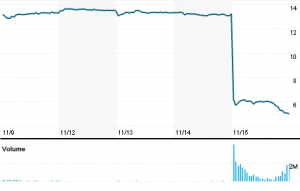 END_OF_DOCUMENT_TOKEN_TO_BE_REPLACED

When looking for a water services/fracking company, I put out a charge to my readers; bring me stocks that you think are a good buy.

Ultimately, I settled on purchasing my own research with BAS. However, I did want to highlight one of the stocks that was thrown out in the comments section. That’s Poseidon Concepts Corp., a small cap Canadian firm with an aggressive expansion policy.

After first glance of this company, I can say I was mildly intrigued – and so before getting started, I want to say “congratulations”. This is EXACTLY the sort of profile I was looking for and I offer you praise for that. Keep up the good work.

But, this company is uninvestable for me, and now I want to share why with all of you.

The first reason I cannot buy PSN.TO is because of where the majority of their assets are located. $118,641 thousand of their $192,759 thousand of assets are accounts receivables. And 16.7% of all accounts receivables are past due. The natural gas fracking industry is expecting a slowdown; in the event that jobs start to get cancelled, this area of the company could be positively ravished.

The company is worth $1.14 a share now, and that’s optimistic. So the company already has a lot of premium baked into its value. Now, revenues have increased almost five fold, but that’s because the company just made a large acquisition. What’s the real growth rate of this company? I can’t tell yet, and making just $0.76 a share over the last 6 months ($1.52 a year), the company is already looking at 9+ years before hitting fair value. That’s a long time to risk holding a micro cap stock in a volatile, young industry that hinges on natural gas pricing. A few deals can make or break this company.

How are those numbers the same? The company just completed a major acquisition in the last 6 months, and allegedly have created all this value, yet their earnings per share over the last half a year are exactly flat? So then why is the stock price up almost 30%? The price for the book is running away, and the earnings are stagnant.

Typically, at least in American finance, an option is a contract to purchase 100 shares. I’m not sure about Canadian finance I guess, but I’m betting it’s the same. Meaning either they have non-typical financial instruments being disclosed, or they mistated this section. That’s a difference between virtually none of the company being in play, and as much as 1% of the company being in play. Admittedly, it’s not much in the grand scheme of things. But this part of the filing seems sloppy to me – are these options worth 1 share apiece or 100 – and makes me wonder “what else did they miss”? That makes me nervous. I don’t like it.

The fourth reason I don’t want to buy this company is contained in the cash flow section. Over the last 6 months, the company generated $60,822 thousand in cash for a net increase in cash of $12,124 thousand after all other transactions.

Yet, we see that the company issued $78,241 thousand worth of common stock over the same period, 6.5X their total cash accumulation. And, they also gave out a dividend equal to $42,639 thousand, while only investing $19,572 thousand into new property, plant and equipment. They’re raising massive amounts of money is new shares so that they can hand out dividends, while neglecting growing the business.

Why is a company this size paying dividends at all? If the natural gas market was booming so hard at the beginning of this year to compress gas prices this far, explain to me what a $200 million company is doing paying a dividend at all? BAS is a much larger company than PSN.TO, and they are still reinvesting all of their money into the business – that’s what you do in a hot business cycle paying big margins. You grab as much as you can. No one wants to pay this kind of money for a stock that isn’t growing quickly.

And the final reason has to do with why I ultimately selected BAS over PSN.TO. BAS has somewhere between 25-33% of their shareholder value in cash. Over the next few years, before debt comes due, that gives them a great value of opportunity. I continue to forcast higher dollar value, mostly from a continued collapse in Europe and China.

PSN.TO, meanwhile, has only 13% of their (more volatile) shareholder value in cash. And again, since the vast majority of their book is in accounts receivables, that book can collapse in a hurry.

Now, this company is so small, none of it may matter. 11% of consolidated revenues came from just one customer. If they nail a few big deals, this company could skyrocket. But what small company isn’t in that position.

Conversely, just one or two bad moves, and this hundred million dollar company could snuff out of existence rather abrubtly.