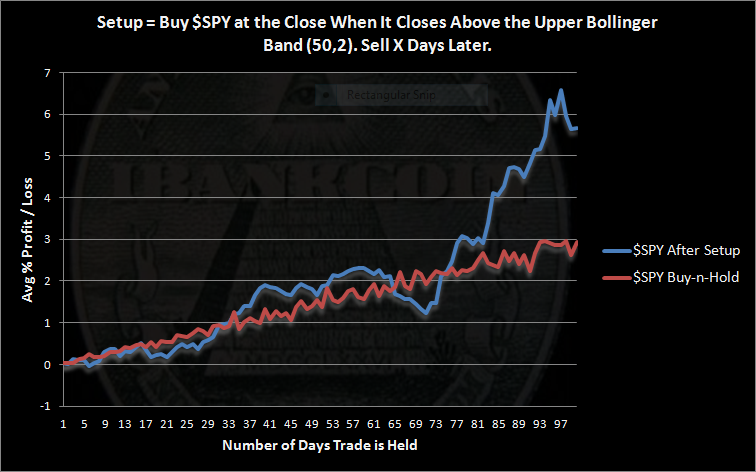 END_OF_DOCUMENT_TOKEN_TO_BE_REPLACED

The Gold Bug Thesis is Officially in Tatters

Almost All of Wall Street Got 2012 Market Calls Wrong

END_OF_DOCUMENT_TOKEN_TO_BE_REPLACED

I brought to your attention $SNFCA in my recent high tight flag screen, published Wednesday night. The stock is now up more than 7% since it was flagged. 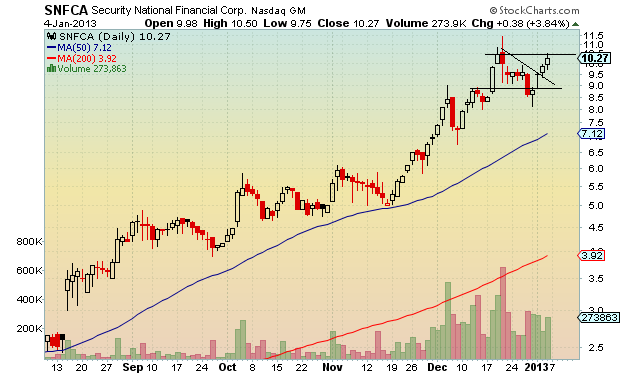 The stock has broken out of a descending triangle but has yet to pierce overhead resistance. Bulkowski’s rules for high tight flags trigger a buy when price gets one penny above the top of the flag pole. For SNFCA, this breakout price is $11.47

END_OF_DOCUMENT_TOKEN_TO_BE_REPLACED

I have followed this system for 3 years now, and have traded it live since February 2012. I am happy with its performance and will keep trading it.

2012 Results, buying the first trading day of January 2012 and holding to December 31st:

However, if the system had been traded in 2011 and those open trades held into the beginning of 2012, then the compound annual return for 2012 is 11.8%. With $SPY doing 11.7% for 2012 (not including commissions or slippage), I find this return to be very respectable. Keep in mind that there are no commissions or slippage generated from trading Fidelity Select Sector Funds.

The system is very simple to trade and is sustainably traded by just about anyone with a Fidelity account and about 30 minutes a month of free time to devote to it.

The system is currently long the following funds:

Here is a link to the funds the system trades: Fidelity Select Sector Funds

I am honestly excited about continuing to trade this system, and if you have ever traded a system for any length of time, you understand how hard it is to feel comfortable enough to trade it by the rules and still enjoy the process.

END_OF_DOCUMENT_TOKEN_TO_BE_REPLACED

Last night’s high tight flag did well today. Keep an eye on it. 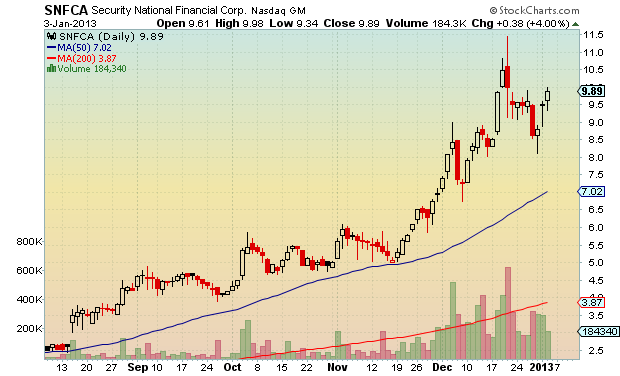 END_OF_DOCUMENT_TOKEN_TO_BE_REPLACED

$SPY Gaps Up More Than 1.75% and Closes Higher Than the Open. Bullish or Bearish?

After the last 2 crazy days in the market, I’m going to bang out a few more studies to try and figure out what is going on. This study builds on tonight’s previous study – $SPY Gains More than 4% in 2 Days. Bullish or Bearish?

The setup is simple enough. $SPY gaps up more than 1.75% above the previous close, and then closes higher than the open. I added 2 modifications to that setup, which I’ll discuss below. 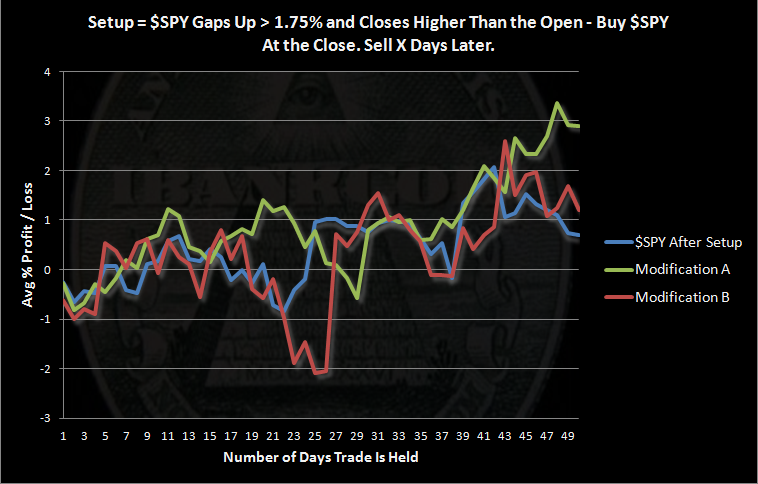 First we’ll discuss the results of the setup (blue line). There were 38 occurrences of this setup, with 19 held the full 50 days. Sample size should be a concern. On average, we have gapped down the next day after the setup. Over the next several days, $SPY has tended to trade beneath the gap-day close. Ignoring the small sample size, this setup has yield neutral results over the next month and would not beat the average $SPY buy and hold trade over 50 days.

Modification B: This modification is a nod to the previous study. It requires the setup from Modification A and that $SPY has gained more than 4% in 2 days. Because of the specificity of the setup (we are basically modeling almost exactly the last two day’s trading), the sample size is small. There were 22 occurrences of Modification B with 11 trades held the full 50 days. The results are bearish over the next month.

As often is the case, the situation is murky. On average, $SPY has retraced a large gap / large gain over the next few days. Thus, I am looking for a small retrace in the next day or so of less than 1%, and then a higher high. After the higher high is made, I expect that a gap-fill process will begin.

Traders who have not chased here may want to consider waiting a bit longer before getting in, or at the very least, entering in small positions.

Previous and Related Post: $SPY Gains More than 4% in 2 Days. Bullish or Bearish?

For more on gaps, check out Quantifiable Edges recent post: 1% Gaps Higher to Start the Month.

END_OF_DOCUMENT_TOKEN_TO_BE_REPLACED

$SPY Gains More Than 4% in 2 Days. Bullish or Bearish?

I’ve said over and over how hard it is to find a setup on the indices that produces a bearish result over an intermediate term. Almost all setups confirm that the market likes to go up more than go down. Imagine my surprise to find that the past couple of days have made a truly bearish setup. 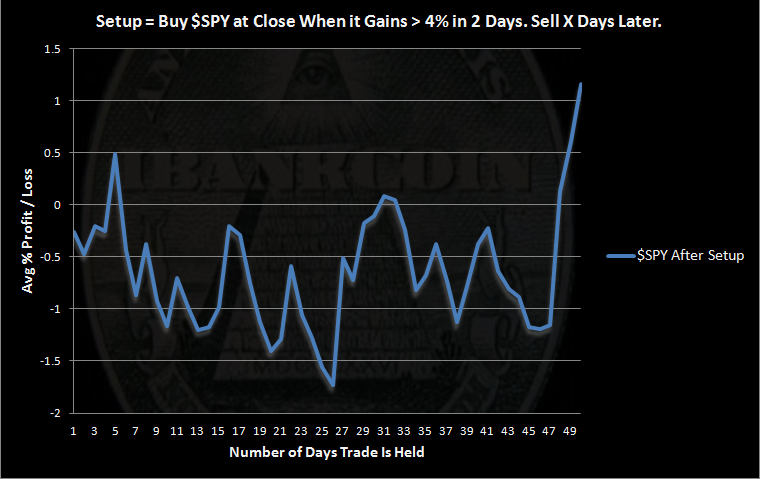 It looks like another spike higher is to be expected over the next week. But if history is our guide, any move higher should be sold. $SPY has fallen, on average, greater than 2% over the next 3 weeks.