Charting the Ups and Downs of RSI2: Using RSI2 to Sell Short SPY

While a RSI2  reading above 80 is not extreme, 80 is an often used RSI2 boundary marker. Let’s look at the historical performance of shorting SPY at the close anytime RSI2 closed above 80. The short will be covered at the close 5 days later.

What I think when I look at that graph is there is not enough meat on the bone to make me want to short SPY only because the RSI2 is greater than 80. The 20 and 50 trade averages have oscillated around 0.0% with some lengthy dips into negative territory. Unless timing was impeccable, it would be almost impossible to consistently make money using this setup and a 5 day exit.

Some observations…During the bear market of 2007-2009, RSI2>80 did not provide out-sized gains, as one might expect it would have. During the low volatility bull market of 2003-2007, the historical performance slowly deteriorated.

I have a strong feeling that adding a filter such as only shorting when SPY is beneath the 50 day average would improve historical performance.

An important caveat is that the exit strategy may not be a great match. We’ll see the effect of the exit in later studies.

Final note: Based on the 10 trade average, it appears that shorting SPY with a RSI2>80 might soon be in for a string of losing trades.

END_OF_DOCUMENT_TOKEN_TO_BE_REPLACED

This long-term indicator has flashed a warning signal. A lower close tomorrow may take the warning signal off the board. A higher close will trigger the closing of the open long position and the opening of a short position.

The indicator is not designed for short-term swing trading, although it made a few attempts at that early in 2012. It is designed to catch long trends.

To illustrate how it catches trends and quickly abandons a position if it doesn’t trend, consider these statistics: 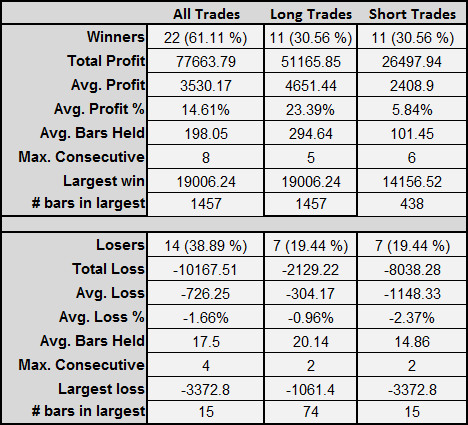 Read just about everything else I’ve written about this indicator here.

END_OF_DOCUMENT_TOKEN_TO_BE_REPLACED

Charting the Ups and Downs of RSI2: QQQ Edition

The first post in this series examined the historical performance of buying SPY when RSI2<10 and closing the trade after 5 days. This post will run the same test over QQQ.

The difference in how this setup performs on QQQ vs. SPY is remarkable. To compare, view the SPY graph here.

For whatever reason, an extremely low RSI2 setting doesn’t seem to work very well with the Qs. Performance has never been stellar and has been in a slow decline since 2006.

I will be curious to see how changing the entry and exit criteria affect historical performance when using QQQ. For now, I am left to ponder why historically this setup has performed so differently on QQQ compared to SPY.

END_OF_DOCUMENT_TOKEN_TO_BE_REPLACED

Charting the Ups and Downs of RSI2

Over the course of the next few weeks or so I will be charting the historical performance of buying SPY and other ETFs based on various levels of RSI2 readings.

This first post takes a look at SPY, using a RSI2 level of less than 10 to initiate buys at the close. Each trade is closed at the close 5 days later.

On a first glance, it appears that the 10 trade average may be able to be used to time RSI2 trades so that the indicator is used when there is a greater likelihood of it being effective.

While the 10 trade average doesn’t suggest a significant breakdown of RSI2<10 effectiveness on SPY, it does show that performance has increased in volatility. It also shows that there are many times when taking just a few RSI2 trades would result in compounding losses.  Again, it may be better to wait for the 10 trade average to fall beneath 0% in order to take higher probability trades. And, as with many mechanical setups, the 10 trade average shows the important of the law of averages. Quitting after a string of losers likely means quitting right before a string of winners.

The 50 trade average does show that the effectiveness has waned over the past 15 years or so.

I will be happy to hear any of your thoughts or questions in the comments section.

I think this is a good place to jump off. There are many variations on this theme. I intend to examine less extreme RSI2 levels and different exit strategies. As I noted in the introduction, I think it is important to run the same tests using QQQ and possibly IWM or other country-specific ETFs.

One final note: MarketSci used to run a fantastic check-up on the effectiveness of mean-reversion. I don’t think he has posted about it this year, but it is worth pulling up the previous posts as his analysis was very interesting.

END_OF_DOCUMENT_TOKEN_TO_BE_REPLACED

The percentage of major exchange listed stocks above their 20 and 50 day moving averages has fallen to levels that have been associated with bottoms in the market.

The middle pane of the chart is where we find the percentages.

While the chart clearly shows that these levels have been strongly associated with bottoms, I decided to run a test to be sure. The green and red arrows in the graph above show the buy and sell points, which are specified in the buy rules below.

Buy SPY at the close if: 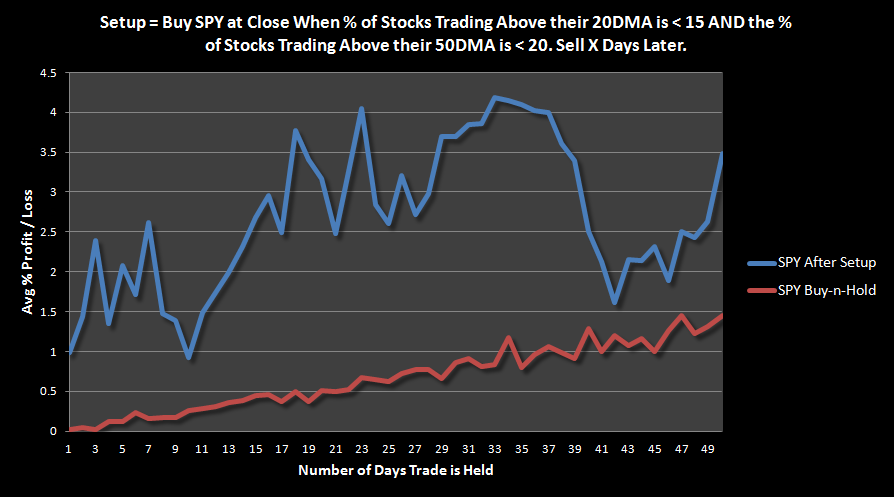 While volatile, the results are very bullish. There are 54 occurrences of this setup, but the samples are reduced to 17 when the trade is held for the full 50 days.

Let’s roll the chart back further and examine a few more years worth of trades.

Save for the trade made in September 2008, this setup has been remarkably successful at identifying turning points.

Note the spikes in volume which occur near or on the exact same day as the buys. Scroll back up to the first chart and you’ll see that there was a spike in volume on Friday, but it was not nearly has strong as previous volume spikes. That worries me a bit. It is possible that we have not yet had enough capitulation for a bottom, but this study shows that we are likely very near to one.

END_OF_DOCUMENT_TOKEN_TO_BE_REPLACED

Folks, this is history in the making. QQQ RSI2 closing beneath 1 for the 3rd consecutive day is extremely rare. This is only the 5th time in the history of QQQ that this has occurred.

Here are the dates for all occurrences:

What can we expect to happen next? Let’s test it and find out what has happened in the past…

Buy QQQ at the close if: 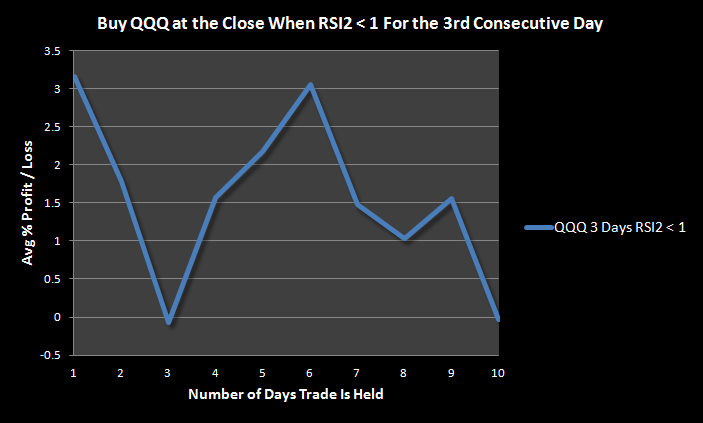 Yes, there are only 3 samples. We couldn’t say that history was being made if there were enough samples to get something statistically significant.

The average next day bounce of 3% is certainly enticing. Again, beware of the miniscule sample size.

What is probably more instructive, and more generalizable, is that volatility ramps up. What we have are 3 swings averaging 3% over the course of only 10 days.

END_OF_DOCUMENT_TOKEN_TO_BE_REPLACED

As I was performing my evening chart-chomping last night, I was struck by the low RSI2 levels on all the major indices. If my memory serves, QQQ was below 1 and SPY was below 4. These are extreme RSI2 readings, yet a quick but not exhaustive search of the blogosphere did not return any articles on the low RSI2 reading. I found that odd because 3 to 5 years ago, RSI2 was all the rage and such an extreme reading would have sparked numerous articles.

Like most fads, it seems the RSI2 popularity has faded.

This is not a surprise as the indicator did hit a period of sub-par performance, and anyone who discovered it during its fad stage likely started trading it as the effectiveness was waning.

But RSI2 is not dead.

The indicator, at extreme readings, is still very effective at predicting short-term, over-sold bounces, similar to what we are seeing this morning.

Last night, I ran a few quick tests on QQQ and SPY, and the extreme readings we saw last night typically lead to a higher close within approximately 5 days, roughly 70-80% of the time. That is an impressive win rate. And those stats include the recent years of sub-par performance.

Starting tonight I will dust off some of the older RSI2 systems and re-evaluate them to see how they have performed since the Armageddon trade of 2008-2009. I may even present a very simple, yet still my favorite RSI2 system, never before published on my blog.

Stay tuned…Until then, enjoy the bounce!