DBA: Doing Business as a Laggard

Much to the chagrin of Jim Rogers and his bow tie (pictured above, on the right) the DBA, ETF for some of the more popular soft and agricultural commodities, has been in a clear downtrend since 2011, if not early-2008. On the monthly timeframe, below, note the potential for a massive descending triangle breakdown as price is currently struggling to hold the 2012 lows.

If those lows are lost, a retest of the 2008 crash lows figures to be on deck. I would extrapolate such a breakdown out to many segments of the materials complex in equities as well. In other words, lagging sectors like steel, coal, ags, etc. are being viewed as inevitable rotation beneficiaries by bulls, not unlike what we saw in the late-stages of the 2003-2007 bull market as speculation reinforced itself to the upside.

As I noted last week, I am watching major industrial/materials complex firms Caterpillar and Freeport McMoRan closely to see if they roll back over after recent oversold rallies, or instead can display a significant change of character to follow-through to the upside in such a way that would smack of serious capital rotation.

While there may be plenty of moving parts to this puzzle, they are all worth watching as the stakes are quite high.

The DBIQ Diversified Agriculture Index Excess Return is a rules-based index composed of futures contracts on some of the most liquid and widely traded agricultural commodities. The Index is intended to reflect the performance of the agricultural sector. 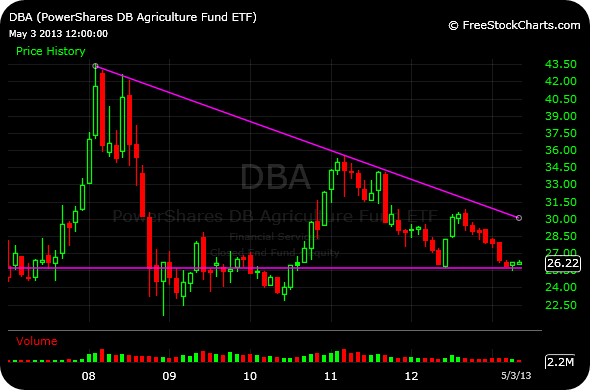