Part 4 will focus on using Bollinger Bands for exits.

Specifically, if the bar closes outside the upper (long entry) or lower (short entry) bands, the trade will be exited on the open of the next bar. This is a very basic exit, and could easily be tweaked. For example, an exit could triggered if the high (or low) of the bar is above (or below) the bands, rather than requiring the bar to close outside the bands.

The Bollinger Bands were built around a simple (not exponential) 20 day moving average.

The spreadsheet below shows the results of the long entry coupled with the Bollinger Band exit.

The standard 2 deviation band works the best. The % profitable is good, but the average trade of $16.65 means that 1/3 E-mini point will be captured, on average.

The equity curve below shows the entry coupled with a 2 standard deviation Bollinger Band exit: 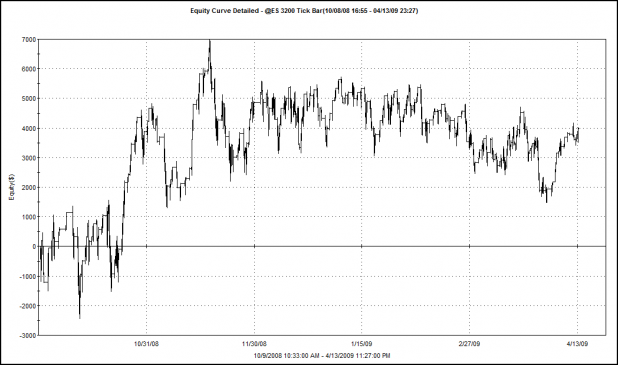 The spreadsheet below shows the results of the long entry coupled with the Bollinger Band exit.

The 1.5 standard deviation band was favored by the short entry. The % profitable is very high, and the average trade shows that each trade may harvest better than 1/2 an E-mini point. Still, the win/loss ratio is very low.

The equity curve below shows the entry coupled with a 1.5 standard deviation Bollinger Band exit: 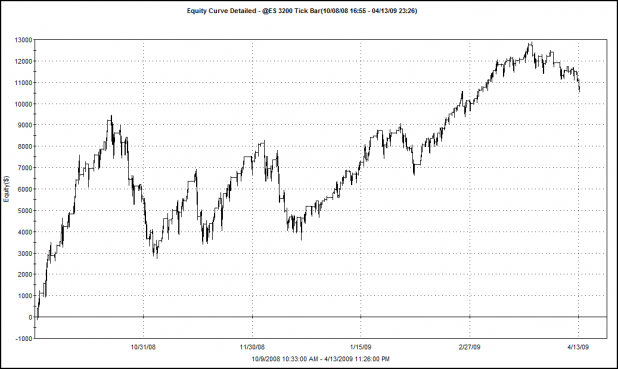 Putting It All Together: An Equity Curve of the Long and Short Entry with the Optimized Exits of 2.0 For the Longs and 1.5 for the Shorts: 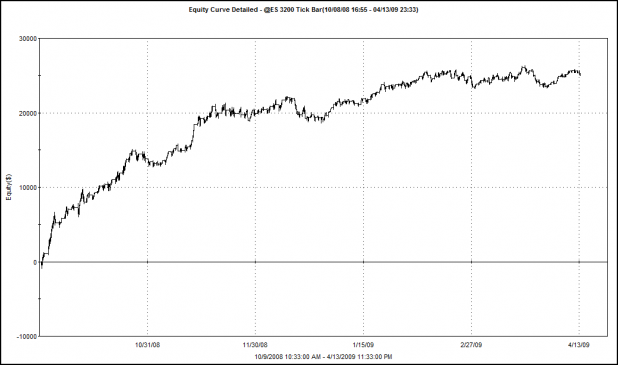 The astute observer may wonder why, when the longs and shorts are combined, the equity curve smooths out, the % profitable drops, and the sum becomes greater than the parts.

From what I can tell after looking at thousands of these trades over the last week, when the system is allowed to go long and short, it will often close a short trade and go long, or vice versa, before an exit is triggered. Basically, it stops itself out and changes direction with the trend. This hints that when I start testing stops, they might actually improve performance (it is often hard to find a system that improves when stops are added).

I think this is very very important for traders to consider, especially those who do not like to use stops. The system does not care that it took a trade in the wrong direction. When it gets a signal to go in the opposite direction, it closes out the losing trade and attempts to catch a change in the trend.