As I am running out of time to get this information out for Lazy Man to digest before the market opens, I am going to report on only one exit tonight: the RSI(2) exit.

I had to make some minor changes in the way the testing was performed. In prior tests, all trades were executed at the close of the bar in which the trigger occurred. In order to avoid some problems, I changed the code to have the exits execute on the open of the next bar. To be clear, the signal is still generated at the close of the bar, but the trade is not made until the open of the next bar. If this is confusing, let me know in the comments section and I’ll flesh it out a bit more.

The spreadsheet below shows the results of the entry coupled with the RSI(2) long exit:

Note that using an RSI(2) exit of greater than 70 would have yielded decent results. Also note the % profitable is the best we’ve seen yet at almost 70%.

One potential problem is that the average winning trade is only 2/3rds as big as the average loser. It is possible that this will be improved when stops are added.

Below is the equity curve generated by the RSI(2) long exit. 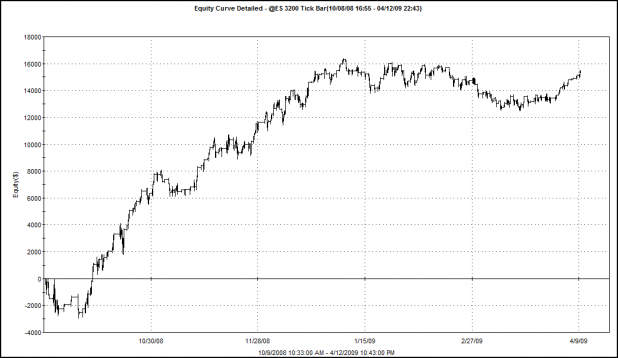 The spreadsheet below shows the results of the entry coupled with the RSI(2) short exit:

Similar to the long exit, exiting after an RSI(2) reading below 20 shows promise. The percentage of profitable trades is even better with some exits exceeding 70% winners. The size of the winners compared to the losers is still an area of concern.

The average trade is approaching $50.00 which means that each trade will capture (on average) one E-mini point.

Below is the equity curve generated by the RSI(2) short exit. 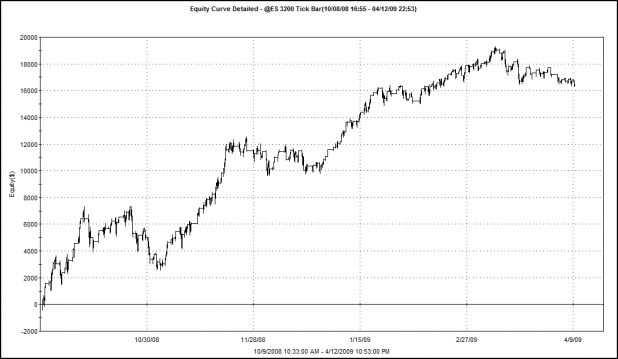 Below is the equity curve for the combined long and short entries and exits: 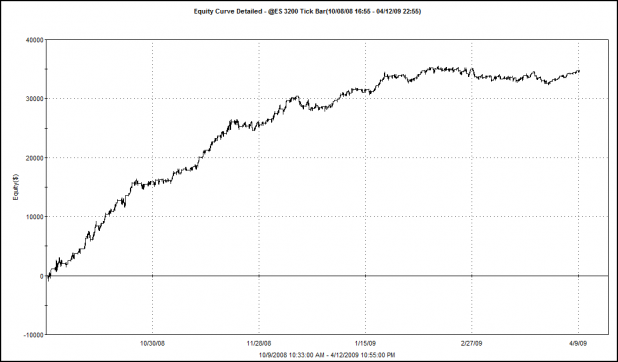 Using an RSI exit with this system presents some difficulties. The primary problem is that an exit can executed on a bar which also fits the criteria for entry. What this means in backtesting is that the trade is closed on the open of the bar, but then re-opened at the close of the same bar. I did not re-do the code to work around this issue.

Another problem is that some trades are entered when the exit criteria has already been surpassed. For example, the system may enter long with RSI(2) that is already greater than 85. When this happens, the system waits for RSI(2) to dip beneath the trigger level (85) , and will sell once it crosses back above 85.

When the system runs both longs and shorts, a short trade is closed out if the criteria is met for a long entry. If the system is long and the criteria is met for a short entry, then the long trade is closed and a short is entered. This adjustment helped the long side trades which leads me to believe that stops might improve results when trading only one side (long or short, but not both).

Bollinger Band exits have been tested and show promise. The next installment will present the results.