The simplest ideas are often some of the best. This is a mantra that should often be repeated by traders and investors. The simplest ideas persistently produce profits for long periods of time. I don’t know if this is because they are so simple that they are ignored or because they identify and exploit the structural architecture of markets.

With that thought in mind, I was recently reading a newer blog, Don’t Talk About Your Stocks. This gentleman wants to trade trend following systems but is relatively new to backtesting and system trading. I can identify. I have a keen memory of where I was and what I was doing when I first read Covel’s Trend Following. Similarly, deciding that I would no longer trade discretionary patterns but would instead follow quantifiable, rules based strategies, was a defining moment in my development as a trader, investor, and system designer/tester.

So the SPY 10/100 System is his first attempt at following a rule-based, quantifiable, trend following system. The only problem is that he can’t backtest it. That is a huge handicap, as it certainly stinks to have to paper trade a system for a few years before realizing that it would have worked or didn’t work. Because I like simple ideas and because I can absolutely identify with his desire, I am going to backtest it for him.

We shared a few tweets and I was able to discern the rules for the SPY 10/100 System.

Upon first glance, the equity curve and drawdowns both look promising. It fared well during the Armageddon trade of 2008 but has missed some of the rally from 2011 to the present. 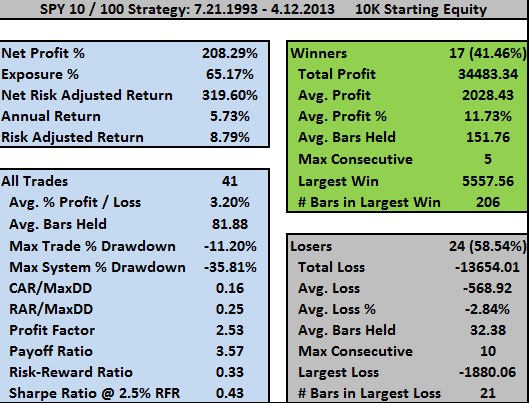 The 5.73% compound annual growth rate did not beat SPY buy and hold which was 6.58% over the same time period. However, the buy and hold drawdown was significantly worse at -56.47% against the 10/100 system maximum drawdown of -35.81%. Since the system does make many more trades than buy and hold, once commissions and slippage are factored in, results would be worse. Note too that trading the open is hard to replicate using all but the most expensive data packages because of how the opening price is reported by the exchanges. I would feel safer replicating trading at the close.

Let’s look at the historical profits and losses: 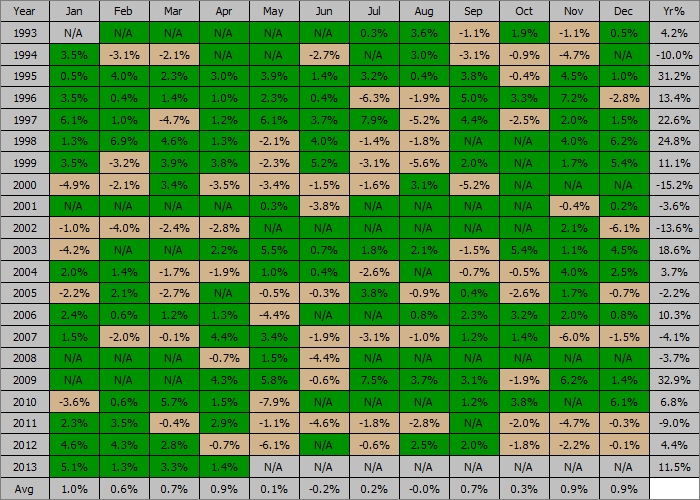 As the stats show, and as the author indicated, this is a trend following system. This means we can expect the system to take many small losses and gather fewer large wins. Over time, the large wins make up for the many small losses. This should be intuitive. Markets do not trend all the time. Small losses are taken until the market embarks upon a strong trend.

Reading about a trend following system can be awe-inspiring as 20 years worth of profits can be encapsulated in one graph. From experience, trading such a system is entirely different. It can seem like a lifetime when the system is whip-sawed over a year or so before it catches another winning trend. Perhaps this is another reason why these simple system can endure over time. Most people can not trade them consistently and long enough to significantly erode the edge. 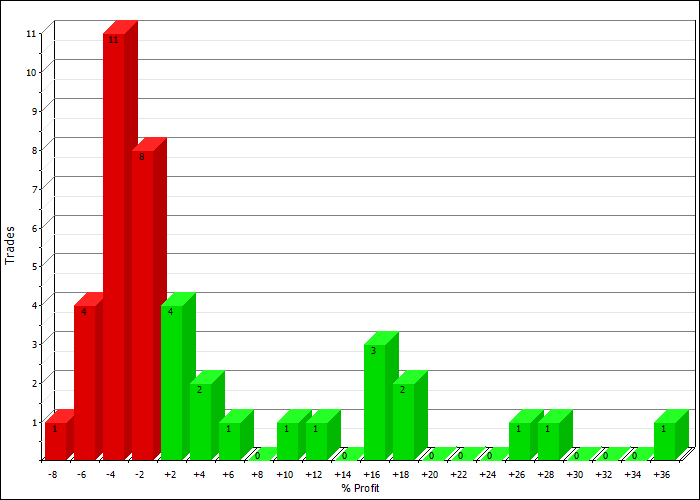 I included this graph because it shows the typical trend following system profit distribution: Many small losses with fewer large wins.

Overall, the 10/100 system is viable in that one is not likely to lose his starting equity if his life saving were to be thrown into it. If the goal is to beat buy and hold and decrease the associated drawdowns, the system is not viable. It does occur to me though that trading the SPY 10/100 system may be a good way to start trend following or system trading in that it is like learning how to ride a bike with training wheels…You can’t go very fast but you have some protection against crashes.

One final note. I backtested the system to 1928 using the non-tradeable S&P 500 index, and the results were remarkably similar to those above. This tells me that this system is not likely to break down or get much better. It will over and under-perform depending on the differing market regimes, but over time the performance should remain remarkably average with the benefit of decreased drawdowns.