Right on Target… Stock Market Gets Voted Off the Island 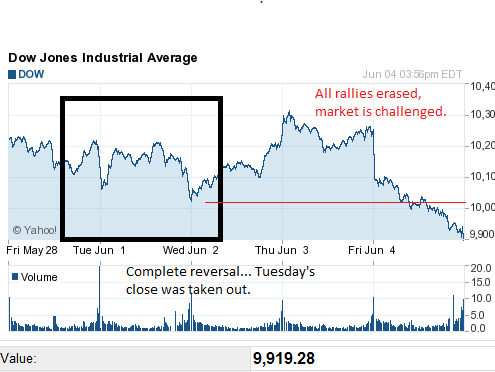 I pointed out earlier that we would have a pretty nice decline today, based on Tuesday’s warning signals, and the fact that selling potential is strongest heading into the weekend.   Market showed very little signs of strength when it got blown around on all the world news.  With many countries hurt financially (can you believe it, not sectors, but countries), the U.S. market has become increasingly sensitive to World events.  That’s why I knew that any rally the rest of the week would be erased.  And so, here we are again, under the water at <10k.   Clearly, investors are getting nervous.  It’s important to start gathering short positions, and avoid buying dips right now unless you are trying out a new small position.  But if it doesn’t go right immediately, then get out.  We’re not in panic zone yet, but we’ve had far too many distribution days in such a short period for us to view the market as a bargain.  Remember, too many distribution days signals a major market reversal.

My plan is to avoid shorting energy until the end of the month.  Also, I’m pulling the plug on some stocks here:  SIRO, PCLN (now a short >180), RVBD (now back at our rally point set in February); meanwhile, I’m still liking HITK, and DRQ looks like a good oversold bargain (I nailed this on the short side back in March, flipping to the long side for bounce).   Currently, I’m looking at shorting JOSB head on, but a part of me is reluctant.

So yeah, while the overall market is hard to get a hold on, it’s much simpler to master a few stocks.  I’ve cut my list of tradeable stocks to about 15, and am focusing more on entry, exit, and stop points.  Seems to be working good in this undpredictable tape.