Need a lotto play?   Next week, we catching the wave on REE and SHZ.  Basic materials is one sizzling sector to be trading right now.    A buddy of mine banked a quick 15% on REE last week.    You can buy these on the panic, or on the uprise, as long as you get tons of volume, but hold it only for a day or two.  The daily volume on REE is insane.  These are definitely short term momentum stocks.  In reality, a better play would be to swing short REE with a high stop.  The longs in REE are very weak and will dump it on almost any negative news concerning rare earth minerals.

Why short REE here?  Well, for one, buying it now puts you in the chasing category (stock is way overbought etc).  You’ll declare victory on 5% gains, but you’ll mourn when it drops 15%.  So, in the end, chasers win small battles but lose the war. 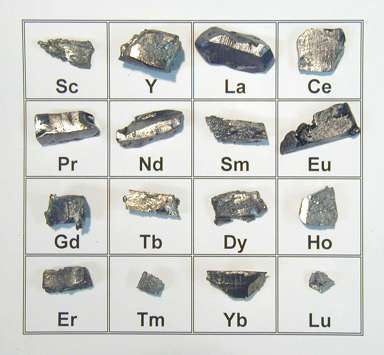 However, the real reason you would want to short REE is that the company in itself does not hold enough substance ath the moment.  The risk is too huge to bear for reasonable investors:

Risk two:  REE has only one significant mine for rare earth minerals, Bear Lodge.  Although it is the largest known deposit of rare earth minerals in North America, it probably won’t reach full mining capacity for another 3 years.  Anything miniscule like permit issues, environmentalist strikes (is that a word?), or stalls can turn into a heavy loss in stock price.

Risk 3:  Rare earth minerals are skyrocketing due to export limitations by China.  If lifted, or even the speculation that it will be lifted, REE will get destroyed.

Risk 5:  Rare earth mineral dependance is about 80% speculation, and it gets increasingly popular the more oil prices go up.

The biggest question is, “is this the top?”  Wow that’s tought to answer, everyone wants it to be the top, and for that reason, it’s making it hard to declare it the top, and REE is up like a billion trillion percent.  I’ve seen a lot of people try to short REE, but they’ve been ignoring volume, which is a total rookie bear mistake.    All I can do is point out the signs, the catalysts, that will break REE up (my list above), and often overlooked, don’t forget to count the high volume selloffs.  So far, we had our first significant high volume selloff a few days ago (see chart), which has created a flagging pattern.  It’s kind of like a ticking bomb… 3, two, 1… boom.   And from the looks of it, the count down only now began… 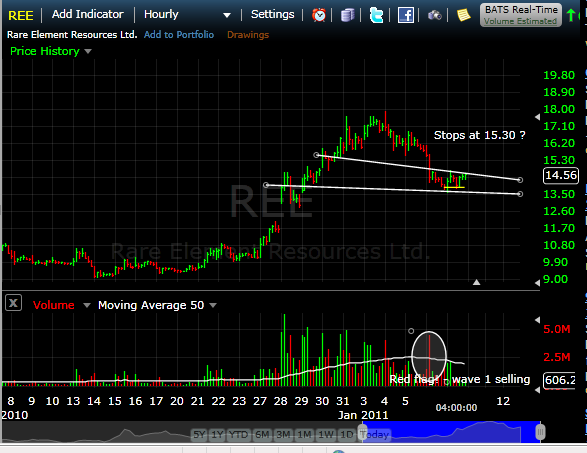 What does this mean?  Well, usually after the first high volume selloff you can get big spikes, or short term rallies, or, if buying stalls, you can see more dumping on the second wave.  So, it’s actually a pretty good play here to short REE with a generous stop around 15.xx.  By the end of the three waves of selling, I think REE will be trading back in the single digits.

The rare earth minerals story is an intriguing one, and I enjoy watching it.  It involves multiple countries (U.S., Canada, Japan, Australia, and Japan), and illustrates how supply and demand can cause panic.  When you come to think of it, it’s just one big game of Texas Hold-Em, or should I say, China-Hold Em.  REE, I’m calling your bluff.