The Curious Case of Goldman Sachs

The following is an excerpt from my latest Weekly Strategy Session, which I published on Sunday for members (12631 subscribers receive the Strategy Session each weekend, at no additional cost).

This particular subsection is obviously geared towards more of an educational bent of pattern recognition and the psychology in play.

Due to the recent weakness in the financials, I would be remiss not to circle back to the critical juncture which marquee financial (and recent Dow Jones Industrial Average component) Goldman Sachs finds itself in. Several weeks ago, I had highlighted the bearish rising wedge technical formation on Goldman, dating all the way back to late-2011. Indeed, we are talking about a massive pattern with potentially devastating ramifications to financials, if the pattern is actually proven true.

I discuss the details and theory of the pattern below, but the main point here is that Goldman attempted to recapture the violated support trendline of the pattern in September, only to lose it late-last week.

Typically, that type of action indicates an unusually weak situation, where bulls used up plenty of buying power to trap in eager short-sellers who were playing the breakdown. Only this time, they failed to close the trap door shut, and instead let the bears out. Further weakness now, down away from $160, would cement the failed rally attempt and continued relevance of a major, multi-year bearish rising wedge breakdown.

For reference, the bearish rising wedge is a chart pattern that starts out with price in a wide range which soon contracts in terms of the swings as prices move higher. You are looking for at least two “reactions” or touches of the resistance trendline above, and usually three reactions of the support trendline below to help give the pattern the look of a wedge.

This theory behind the pattern is often difficult to grasp, in the sense that it is tough to call a pattern of higher highs and higher lows bearish. Moreover, the bearish rising wedge pattern is often a trap that eager bears fall into, as their yearning to call a major top sees them aggressively shorting an assumed breakdown (which often does not come to fruition) while price still works through an overall uptrend.
To defend against those kinds of blunders, consider that, as with all potential reversal patterns and candlesticks, overall chart context and maintaing trading discipline are key. The bearish rising wedge is most valid after a prior, established uptrend. The psychology of the pattern denotes that buyers are slowly losing their grip on the market as the price range narrows.
Of course, confirmation to the pattern in the form of a powerful breach and hold below the support trendline gives bears the best shot at actually capitalizing on the reversal, since otherwise the pattern can certainly either morph into another chart formation or prove to be a trap that eventually sees prices going much higher. 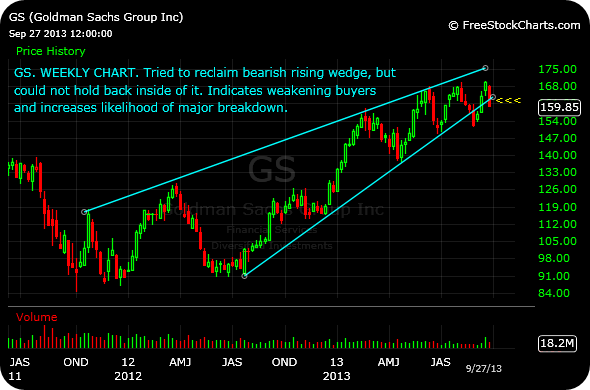 Please click here for details becoming a member of the Strategy Session.