Since its 2011 spin-off from Cablevision, AMC Networks has seen an impressive run higher. Despite beating second quarter earnings forecasts last week, though, the stock faced heavy selling amidst price weakness. On the updated weekly chart, below, you can also see the potential of a bearish rising wedge, which has not yet confirmed but certainly becomes more viable on further weakness. In particular, a weekly close below $61 would be strong evidence of a topping out process at hand.

And that may very well be poetic, considering that Breaking Bad concludes its final season, starting this Sunday night. Depending on how these final eight episodes are done, I still consider the show to be the best production on television of all-time.

At the same time, I am pleased to see they are not going to drag the series on for several more years just for the sake of doing so. Too often, we saw series like The Sopranos morph into soap operas in their final years, even if David Chase was able to regroup and rally the cast for a strong finale. 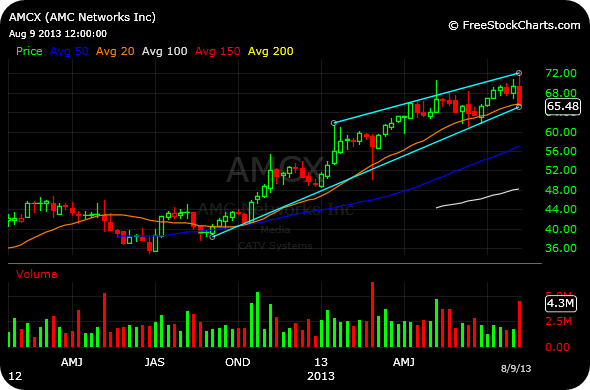