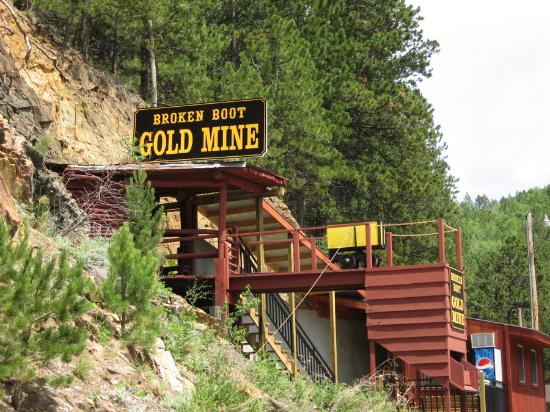 Mark Twain once famously defined a gold mine as a hole in the ground with a liar standing above it. Given the price action in the metals and especially precious metals miners of late, you might say that he had a good point. The selling the precious metals and miners on Tuesday and of late (in addition to coal names) smacks of some sort of unwinding of massive positions, likely by highly-levered commodity-focused hedge funds either blowing up or getting out before it is too late. Historically, from deleveraging events almost always come opportunity for those with dry powder, discipline, and the risk tolerance. However, the risks are high even if the potential rewards are, too. You are not talking about healthy technical charts, in any case. In fact, there would be nothing wrong with taking a pass from playing in the entire metals and miners space until further notice.

I had been looking for a reason to get involved with the metals and miners in recent weeks after shunning them back in the spring of 2011 for being overdone to the upside, but none of the ideas came close to triggering what I would need in order for me to enter. As I have noted before in this blog, technical analysis focusing on playing largely technically-sound momentum stocks and sectors is not the holy grail. What it does do, though, is help me to avoid countless landmine-laden fields that “support buyers,” “contrarians,” “mean-reversion traders” constantly find themselves in, much more than they would care to admit.

As such, if you try to bottom-feed the metals or miners I strongly suggest having a sound exit strategy in place long before you enter the trade in order to protect against a continued deleveraging. I suggest defining your timeframe (day, swing, long-term hold) in advance, and recommend a hard stop-loss of no more than 7-8% in order to mitigate your downside risk to further delevering. I also want to point out that the nature of the current global economy, with central banks around the world led by The Fed engaging in easy monetary policies, lends itself to precious metals and miner bulls ranking among the most stubbornly ideological human beings who ever walked this Earth. Thus, shaking them all out might be a much more lengthy and tedious process than one could reasonably fathom.

In sum, I am probably going to take a pass from playing the bottom-fishing trade in the metals and miners. It does not fit my style. Again, my style is just my style, and not the only way to skin the cat. Those of you who are interested in playing are welcome to my unbiased opinion.

Here is a key for the following charts below:

GLD – I pointed out a few weeks ago that the bullish inverse head and shoulders setup looked vulnerable on the weekly timeframe. If broken, ti would be a very bearish development. In fact, we have seen just that, as the yellow metal looks to have broken below a massive descending triangle. The only way I would go long for a swing trade is if you have conviction that this breakdown is a false one. Otherwise, I would avoid the long side altogether.

GDX – The senior gold miners have come down to a huge long-term level at $38.70-$39. As you can see, it marked the lows of 2010 and the neckline for the major 2008/2009 bear market inverse head and shoulders bottom. Unlike the actual metal, the risk/reward here is better-defined at this crucial area. If you want to play, I suggest a stop-loss just below $38, if not tighter.

GDXJ – The junior miners are at all-time lows. They had given us a few false bullish divergences in recent weeks, and have completely fallen apart. With no price memory here, I would key off of GDX to see if that major level outlined above holds.

SLV – Silver has been punishing bulls for over a year now since that euphoric run up, teasing them with false breakouts along the way, the most recent one in March of this year. The massive falling channel is holding true, and I would not be surprised to see that major 2010 breakout point retested. To my eye, silver is in no man’s land.

SIL – The silver miner ETF broke down from a well-defined pattern and look to have a date with the low-$16 level. If it gets there, you have a setup for a bounce trade, with a hard-stop below it. Again, not my type of trade, but a trade setup nonetheless.

AG – Individual silver miner breaking down from massive descending triangle. As with GLD, the only long thesis here is if you believe the breakdown is a false one and driven solely by delevering.

SLW – Well-known silver miner with an ugly breakdown from well-defined levels and price pattern on the weekly chart. If it gets below $22, you have your trade setup with that prior price memory giving you a well-defined area to plan your stop-loss.

Overall, I hope you see the carnage done to these stocks and ETFs. The metals and miners are in very poor technical shape and could easily get much, much worse in the coming months. If you want to be a vulture circling above the dead carcass, be sure to have a clear escape route so you do not find yourself on the ground lying next to the dead bodies, bloodied and dazed as to what exactly you got yourself into. 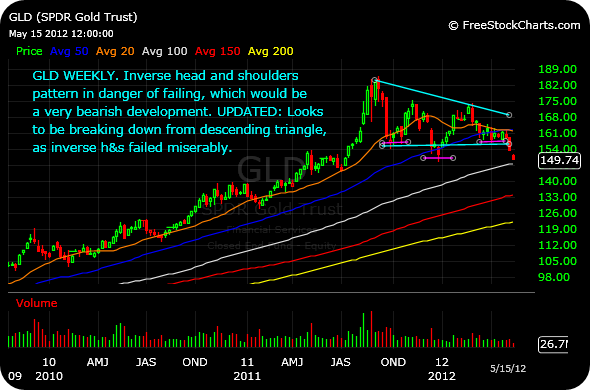 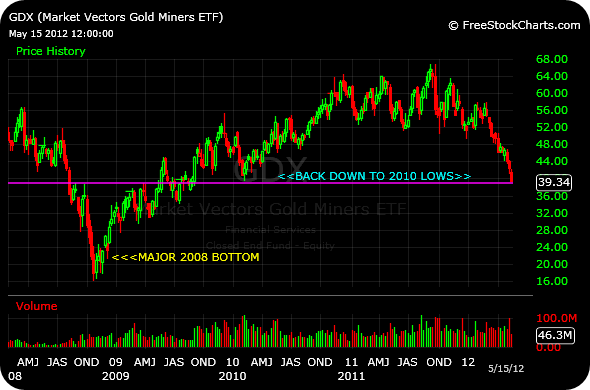 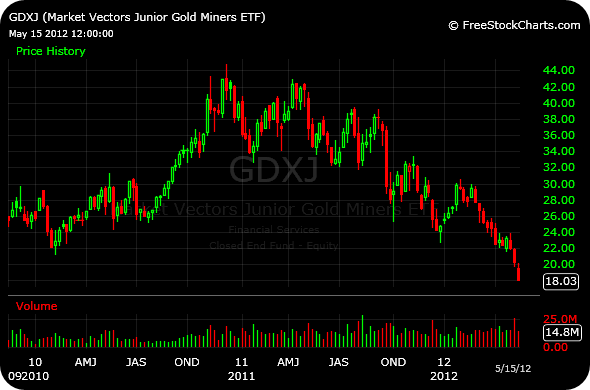 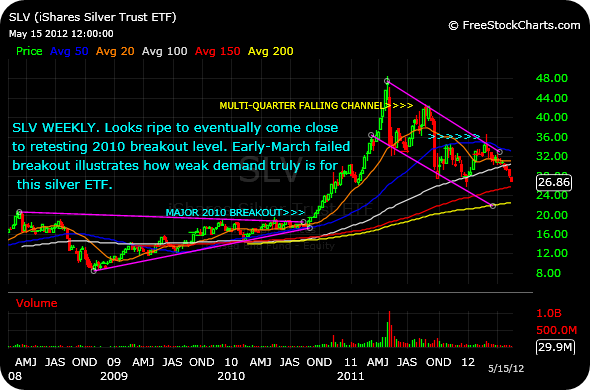 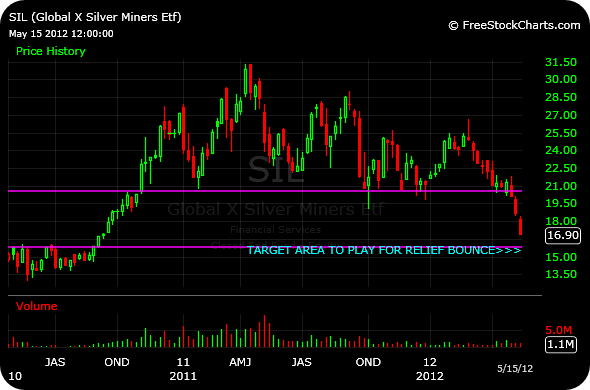 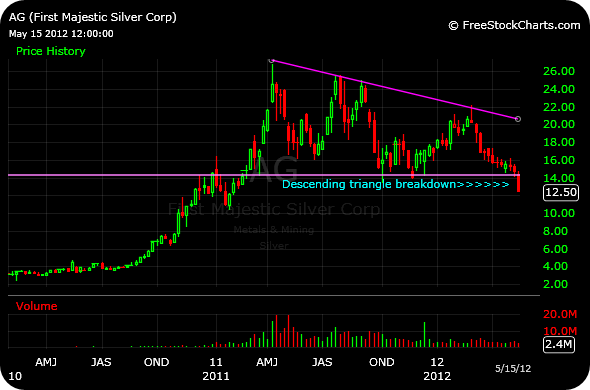 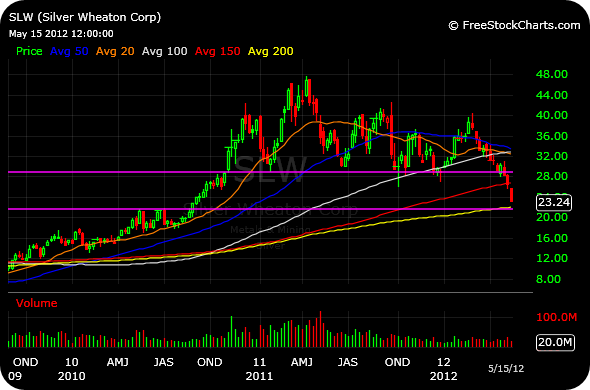