Mexico Manifesting its Own Destiny

One of George Washington’s strongest beliefs was in America avoiding foreign entanglements as much as possible. When you consider the never-ending wars we have been in for roughly the past decade, it is hard to imagine a time when Americans were up in arms, decrying a war against Mexico despite the fact that the Mexicans refused to acknowledge a previous defeat. Indeed, the Mexican-American War was also termed the “First American Intervention,” and in the U.S. the anti-war faction argued it was simply an excuse to pursue Manifest Destiny by spreading freedom throughout the world using a bayonet (sound familiar?).

In 1846, though, one year after the U.S. annexation of Texas, Mexico still considered “the place where everything is bigger” as part of its territory. Some ten years earlier in the Texas Revolution, General Sam Houston led an army of Texas settlers to victory over the estimable Mexican leader, Santa Anna (“the Napoleon of the West). The resulting victory led to the official Republic of Texas being formed in 1836. Coupled with annexation in 1846, there was little course of action to avoid a war, with Mexico still not conceding.

The ensuing Mexican-American War lasted from 1846 to 1848, and was for all intents and purposes a sound military victory for the U.S. The Treaty of Guadalupe Hidalgo encompassed the Mexican Cessation, perpetuating America’s Manifest Destiny of expanding out west as the U.S. acquired territory in California and New Mexico, in addition to claiming Texas once and for all.

Some one hundred seventy years later, Mexico is constantly in the headlines for all sorts of problems the country is facing and trying to manage. And yet, despite the powerful and violent drug cartels literally running entire cities south of the border, the Mexican stock market is as impressive as any foreign market that I studied this weekend. In looking over the iShares ETFs for a variety of countries, Mexico has clearly stood out to me for its relative and absolute strength.

Last August, I discussed two of the better-acting Mexico issues available to trade in America in this post. FMX and KOF continue to impress, right near all-time highs in secular uptrends. In September, I followed-up that post by looking at the actual Mexican Bolsa IPC Index (the benchmark) in this post. Since then, the Mexican market has done everything it was supposed to do technically. The backtest of the 32,000 breakout level held brilliantly, and the market subsequently marched up to just a touch below 40,000. Moreover, a measured move from its primary breakout in 2010 gives us a not-yet-acquired target of about 48,000.

Mexico’s stock market may very be climbing one of the steepest walls of worry in recent memory. Compare the weekly index chart below with other nations, and you will see why any intermediate-term consolidation should likely be viewed as a buying opportunity. 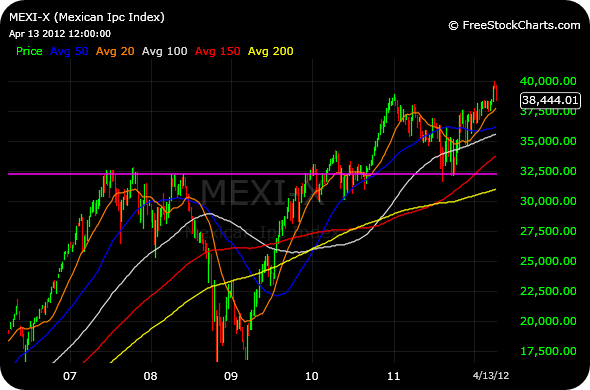