Another Dazzling Show by Apple?

Back in November, I detailed my short thesis and ongoing trade regarding the price action in shares of Apple. Inside 12631, I realized a solid gain on the first half of my short position, and then was quickly forced to cover the final half of the short for a small loss as the stock experienced a V-shaped bounce off of its Thanksgiving week lows. I have not traded the stock since.

My reasons for the short thesis were entirely technically-driven. First and foremost, the daily chart displayed a rare “island top” pattern, with gaps on either side of a series of tightly-connected smallish candles after a prior uptrend. Moreover, the weekly charts was flashing both a bearish MACD divergence to price, as well as an ominous MACD bearish cross.

Currently, Apple has rallied all the way back to fill the gaps from the island top pattern. All-time highs for the stock are from that October 17, 2011 print of $426.70. Price is currently just below there, and bears are hoping that the relatively light buy volume of late is a sign that institutions are not supporting Apple enough here to break it out to fresh highs. Apple bulls, as always, remain steadfast in their belief that this is a once-in-a-lifetime winning stock that simply will not be denied new highs on a periodic basis. While the highs of the island top have not been explicitly breached, the whole concept of the “island” centers around the gaps on either side, which have indeed been violated.

I do not see much of an edge for either side at this point, regarding swing trading. For day traders, I believe it is worth shorting the first touch of all-time highs at $426. Apart from that, I do not see enough buying volume to convince me that we are simply breaking out from another period of consolidation for a sustained move higher, although a low volume push higher for a final leg up is certainly within the realm of possibilities (it is just not a high probability play for me). As far as swing shorting Apple here, I do not see an entry yet. The bulls have clearly recaptured the initiative for now, and I would at least wait until a weekly MACD bearish re-cross before I would consider shorting Apple again. 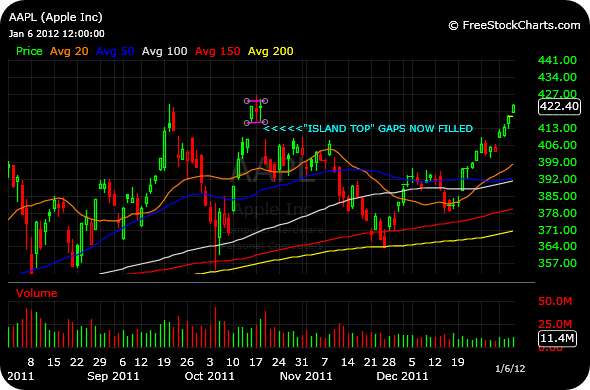 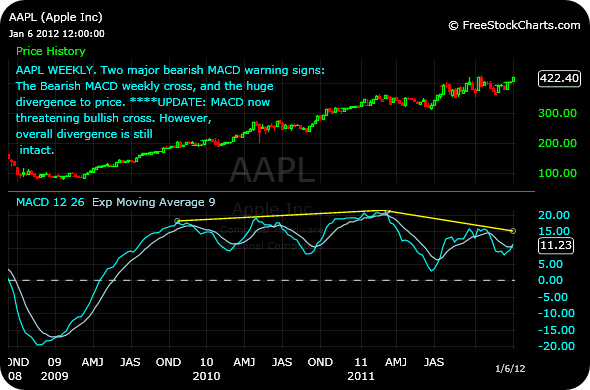 Following the Aruba Network of Stocks