I don’t remember much of that ride, just that I felt horrible, but all the muscle relaxers where keeping me from losing it. The only problem with this, was that I was literally a zombie, I couldn’t really talk or do anything. When we took a security halt, waiting for the air assault, flown by my brother, that I was supposed to be on. I’m still bitter about this.

I’m not going to be selfish and say that they should have sent me even when I was so sick. This is combat. I really only remember being woken up when we hit our “tactical halt,” in the trucks, waiting for the air assault. The 502nd had cleared the city, street by street, and we relieved them in a school, that had been a weapons cache in the middle of the town.

These disgusting bastards took shits in almost every room, and wrote a note on all the blackboards in the classrooms for us. We let our CG (Commanding General) know– MG Swannack –and he let their’s know– MG Petraeus. Their 1SG, CO, PLs, and PSGs, all had to come clean it up and give us a personal apology. Don’t mess with real paratroopers, legs.

We pulled security and ran stupid presence patrols, one of which got ugly. I wasn’t there, but some Iraqi “hero” decided to try to come out and face a nine man squad– armed to the teeth –with a lowly AK47, he promptly got cut down. Apparently he had come out of nowhere– at this time everyone lined the streets when we walked past –pulled the bolt and started burst from the hip. 3rd Squad was out with one of the guns from Weapons Squad, and they cut that stupid bastard in half. 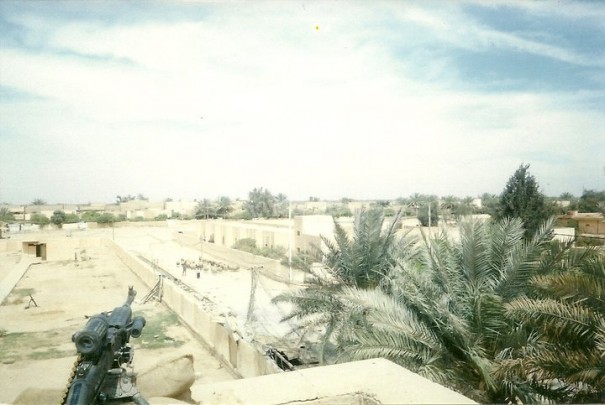 They took no causalities, neither did the local populace in attendance, and they allowed no collateral damage. This idiot’s rounds went right in between my first team leader “TJ,” and my boy from basic training/Airborne School, “Jeffe,” who will be telling stories at my wedding– mind you. Rounds ripped through Jeffe’s “pro mask carrier,” on his left leg, right near his femoral artery.

For their quick action under fire– these dudes did not seek any cover, they just pulled their weapons up and fired –TJ received a Bronze Star with V, and Jeffe a ARCOM with a V. I’m sure all of you are thinking, “it was just one guy,” have you ever had a person with a fully automatic assault rifle step out right next to you, in a crowd of people at dusk?

Exactly, instead of hitting the deck or running for cover, these guys stood there and engaged the target. After that, no one wanted to mess with us. We were know as “The Angels of Death,” because the “double A’s” on our patch looked like wings. 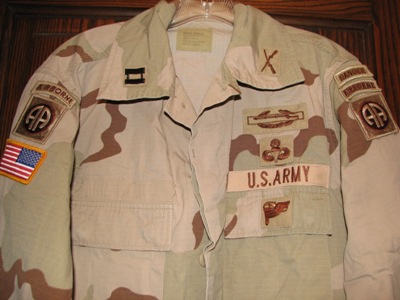 We recouped and ran presence patrols out of a school in the middle of the ancient city. With multiple religious shrines around us. Once things had calmed down, and the 3rd ID and 1st Marines were able to make their advances to the outskirts of Baghdad, our patrols got lighter and lighter. This was a weird time, we still deficated out in the open, even though we were in the middle of a city, with locals all around, able to watch. Sick bastards.

I don’t know why they would want to watch, but after endless days of pulling security and running presence patrols, we go the order that we would move out to the the outskirts of the city and link up with a SF (Special Forces) unit, and their FIF (Free Iraqi Forces) counterparts. We really wanted to get back in the fight, but they were putting us in the rear, with SF, in order to have us ready to meet pockets of resistance in Baghdad– and elsewhere, and make sure this religious procession went off without a hitch.

I think it’s called “Ashura,” and all the Shi’ites make a great procession to Karbala, whipping themselves and hitting themselves with chains, in order to honor the martyrdom of Husayn, and the separation of Islam. Either the holiday is the wrong one, or they just celebrated at the wrong time of year because Saddam wouldn’t let them for so long. 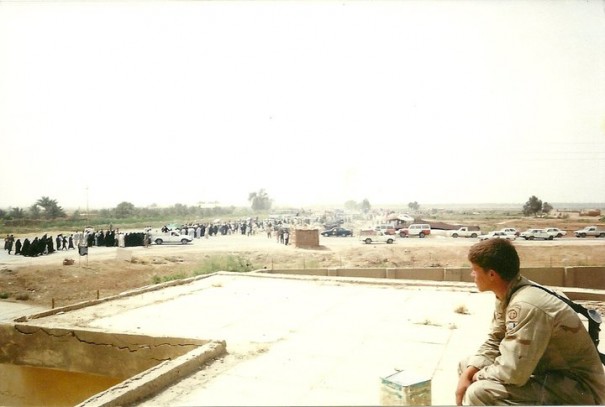 Procession of pilgrims to Karbala, for the first time in over twenty years.

Either way, I was sleeping in a huge barn, at a sulfur factory– seriously –watching these idiots maim themselves. Just wanting to be back in the fight. After watching this madness for awhile, SF moved out, then we got our orders, we were going to go to Lake Habbaniyah,to work in and around Fallujah, that was in the “Sunni Triangle,” –whatever that was. We were in reserve to deploy at a moments nice to face whatever horrors awaited in Baghdad.

We were bored already…

One Response to “The Invasion, Part 6”

What the Crystal Ball is Saying About P
3 comments

This is Manifest Destiny, This is America
22 comments