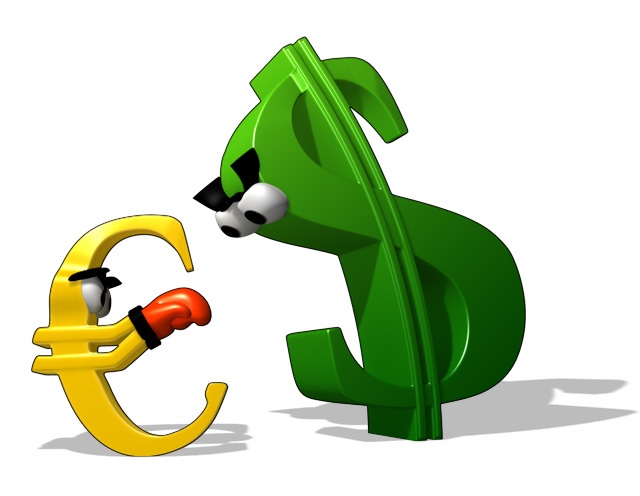 Draghi whiffed on delivering the goods today but the truth be told the EUR chart was putting in a bottoming megaphone which is very bullish.  So I don’t think it mattered much what he said and the dollar was topping and about to turn down as well.  US equities had a rough go of it today because of what appeared to be an unwind of a long US stocks short EUR levered carry trade.

Due to the ensuing currency wars and now what appears to be a lack of CB coordination we have had drastic changes in the relationship between US stocks and different currencies.  The biggest changes have occurred between the Euro and US stocks and the Us Dollar and US stocks.  In fact the changes are so drastic that it really leaves the Fed with a Hobbesian Choice between imploding the real economy globally or letting the air out of the US stock market.  Let me explain.

Below I have three graphs the first two are the most important.  They all show a specific currency’s daily correlation versus the SPY.  In the first graph we see what many of us have come to know as the Dollar carry trade where the Dollar goes down and SPY goes up.  That relationship has flipped on its head and now SPY is positively correlated with the Dollar.  It is not as strong a correlation as the inverse was in the past but it is a huge sea change.  As capital is fleeing countries that are depreciating their currency we are the beneficiary of huge capital flows into our bond and stock markets.  However a stronger dollar is also causing earnings of US global companies to go down and deflation to rage across the globe.  This is putting a strain on corporate cash flows and it looks like the credit cycle has peaked.  I suspect the reason the SPY has levitated sideways for 18 months is due to the fact the marginal buyer has been a foreign entity despite weakening credit and fundamentals.  The correlations for both the Euro and the Dollar flipped around June of 2014 right about the time that credit spread tightness peaked as well.  I have no doubt that the cessation of US QE has been the ultimate cause of these relationship flips.  Less dollars being printed versus other currencies has caused a supply demand imbalance with the result being a strong Dollar versus all other currencies on the planet.

Bottom line: the short EURO or JPY and long SPY trade looks crowded at this point.  The chart of the Dollar looks to have topped and the Euro looks to have bottomed.  Addtionally many smart FX traders are telling me that the JPY looks ready to rally which also will cause selling of US stocks.  The unwind of this trade will no doubt put pressure on the US equities markets and will likely help propel the selling pressure over the next few weeks and perhaps months.  The trade is unwinding because the boats are too loaded to one side and folks will soon realize that Janet is not going to raise rates.  If she doesn’t raise rates the dollar goes lower and so do our stock markets due to this new correlation and foreign marginal buyer disappearing or selling.  Recall we sold off on September 17th when the dollar tanked as she delayed the rate hike.  However, if she raises rates it could cause continued contraction/deflation due to dollar strength and she risks a credit implosion and a banking crisis.  Her choice appears to be saving the system or letting stocks sink and a recession unfold.  Essentially the stock market seems doomed to me either way.  When you mess with mother nature this is what happens.  They truly have painted themselves into a corner.  I wonder if Janet is aware of the grim choice before her?  If not I suggest someone forward this to her pronto.