I last wrote on the uranium market in February 2017, “Supernova Investing: Uranium”. Please start here for full background, before you go down the nuclear/uranium rabbit hole; https://ibankcoin.com/firehorsecaper/2017/02/06/supernova-investing-uranium/#sthash.0jGcPuHC.dpbs

Envelopment of the globe by COVID-19 has been swift, and unforgiving. Most markets, especially commodity markets (save gold), are beset by demand destruction never seen in modern times. The workings of the global nuclear energy market do allow such respite for the uranium market, higher prices ensue. The 447 global active nuclear reactors (99 reactors or 40% in the USA, providing 20% of the USA energy needs) require their 140 million lbs. of U308 uranium per annum. New reactors planned in China, India, UAE and Russia will be the thumb on the scale demand wise. COVID-19 has led to the closure of critical uranium mines, with more announcements expected. The near term drivers of spot (out to 1 year) uranium prices will likely be supply driven. Uranium mines are typically remote, fly-in affairs with workers on monthly cycles in camps. Not ideal for social distancing, as you might guess. Cameco, Canada’s largest producer, and operator of the only operating uranium mine in Canada, Cigar Lake (18mm lbs/yr) is currently closed. There are only 40 operating uranium mines in the world. 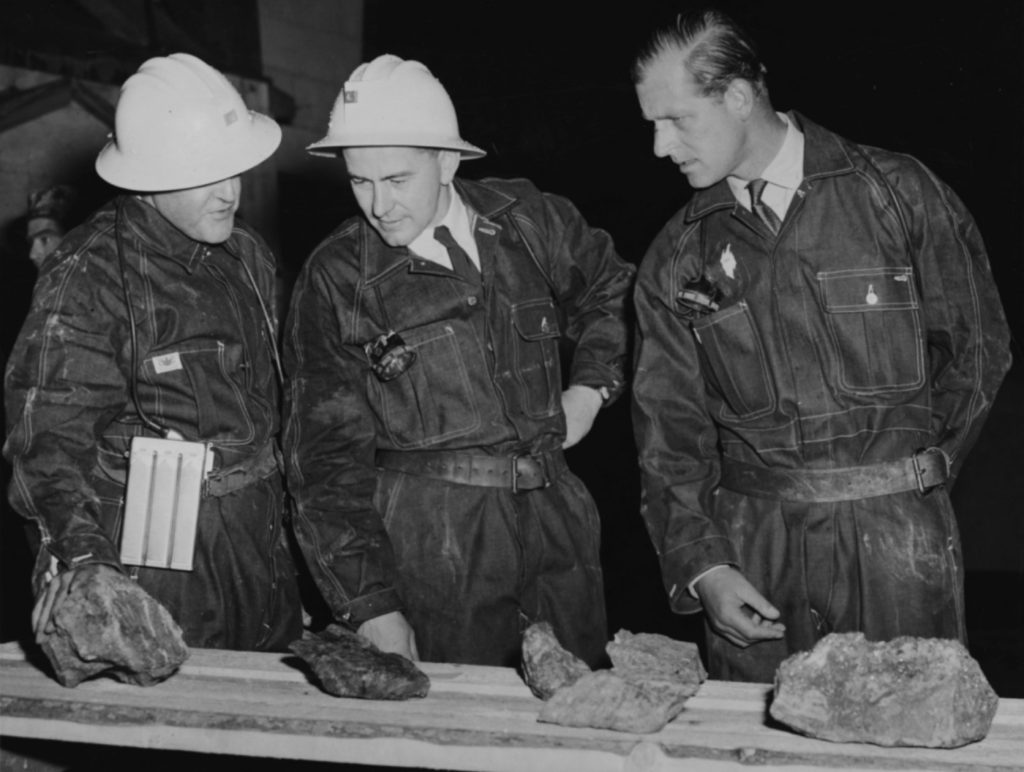 Getty images. Very clean uranium miners. The ties are a dead give away, “mgmt”.

The uranium market has been in a funk ever since the 2011 Fukushima disaster in Japan. Fukushima is in the Tōhoku region of Japan, a couple of hundred kilometers north of Tokyo.  It has been reeling not just from the earthquake and tsunami, but from the clean-up of the nuclear plant site. Japan used to get 40% of their energy from nuclear power, pre-Fukushima. Few Japanese nuclear plants have come back on-line in the interim, with LNG and coal providing the bridge fuel. The country with the highest % of power produced from nuclear power is France at > 70%. Globally, nuclear power is a stable 10% of the global energy mix.

The uranium supply chain web is complex and secretive. JV’s, off-take agreements and bi-lateral contracts. There is no futures market for uranium. Data on reserves is scant and dated, but all prognosticators see inventory levels at both the producer and utility level as relatively low and headed lower. EIA data from end of 2018 saw utility reserves at 110mm lbs., about 27 mths supply. They are assumed to be < 100mm now, hence inside of 24 mths. 1/3 of the nuclear plants uranium needs are replaced on an 18 month cycle. Plants only close for scheduled maintenance, otherwise it is a 24/7/365 day commitment. Producer inventories are lower than historical; Cameco used to run 24mm lbs. before the McArthur River mine was closed and is now at 6 (2-3mm lbs. shy of their target). Barring the ability to negate some contracted volume via the enforcement of Force majeure clauses in individual contracts (due to COVID-19),  Cameco is expected to be a buyer of uranium in the spot market through 2020. 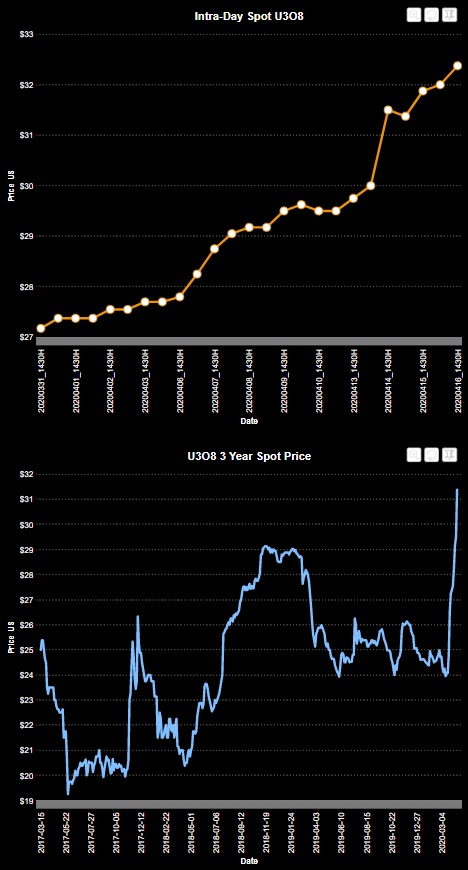 The uranium investment choices have expanded considerably since my 2017 missive. I’m now more keen on the producers, like Cameco Corporation (recommending the TSE listed Canadian dollar denominated shares, i.e. long the stock, short the currency) $CCO.TO, despite the idiosyncratic risk. Cameco’s prior tax woes with the CRA were resolved and their cost base is considerably lower than in prior cycles. Lower oil prices and a weaker Canadian dollar both improve margins considerably (20% +). The uranium market is in many way a duopoly, with Canada’s Cameco and Kazakhstan’s KazAtomProm accounting for 60% of world supply. I’m less keen on the Uranium ETF $URA due to a lack of sophistication in their portfolio construction.  70bp seems like a big fee to buy a handful of names, let alone to go “off piste” with names like Barrick Gold (5.75% weighting). $URA’s weighting is 24% in National Atomic Co Kazatomprom and 21% in Cameco. $URA has a paltry $160mm in AUM, perhaps reflecting the underwhelming changes since 2017. 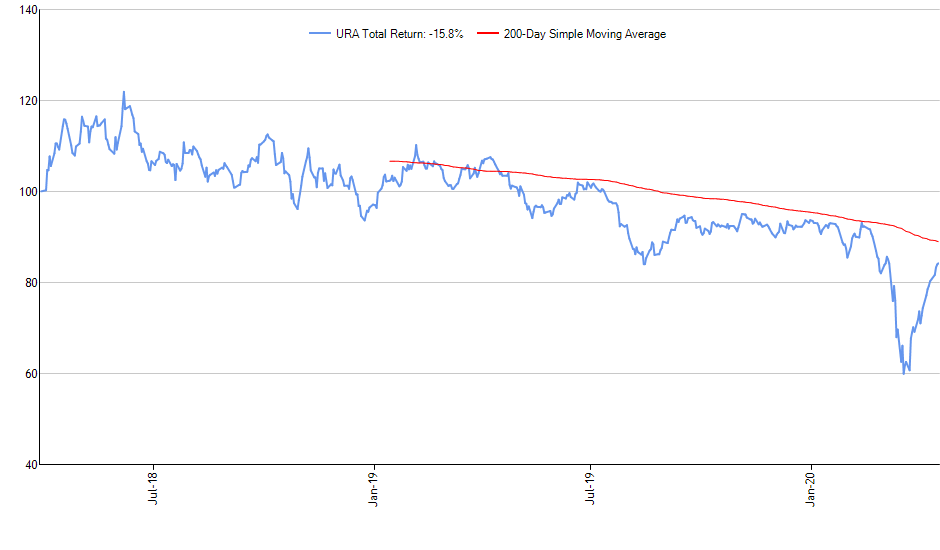 A couple of listed physical uranium plays have entered the fray. Uranium Participation Co. (UPC), ticker symbol $U.TO has a market cap of C$693mm (US$495 million with USD/CAD at 1.4020 …. 1.45 to be re-visited soon, in my view). Uranium Participation Corp has had a wild ride in 2020, swinging from a ytd loss of 21% the 3rd week of March (a 30% discount to the NAV of the uranium they held I might add) to a 25% gain on the year. Even in a home made ETF construct I’d likely keep the weighting modest in anything that can deviate from intrinsic that far, but such was the dislocation evident before Powell and Mnuchin re-painted our Potemkin village (BRRRR). The volume, including block trades as high as 400k, which we have seen in Uranium Participation Corp stock in recent days implies some incremental institutional involvement in the space. The other listed vehicle for physical uranium is LSE listed Yellow Cake plc, ticker $YCA.L with a market cap of £199mm (US$240mm). IF I allocate to this I will certainly hedge the currency (i.e. I do not want to be short British pound sterling, but I’d gladly short the Cdn Loonie ,as noted). You might recall the term yellow cake from the Uranium One scandal where it was alleged that Hillary Clinton brokered a deal for 20% of the US uranium reserves to Russia for a $145mm “donation” to the Clinton Foundation. The allegations have not been proven, I might add. Yellow cake, also called Urania, is “semi-processed” uranium (post mining, but before fuel fabrication or uranium enrichment).

As inferred by Yellow Cake’s clever logo, all uranium is used for clean energy, hence it passes even the finest Environmental, Social & Goverance (ESG) filters for investment. Few things have gone off the radar as completely in a pandemic as ESG, there is likely more concern about MSG in your Chinese take out order, but it is an important metric in terms of staying power for the rally in uranium prices, beyond the current supply-driven price shock. The USA needs 56mm lbs. of uranium per annum to feed its active nuclear reactors and only produces 4.5mm lbs. Secure supply is likely to trump a pure price based procurement strategy going forward. Supply chain re-engineering post COVID-19 will favor producers like Canada’s Cameco and a much needed “wind in the sails” for Saskatchewan, Canada.

Mr. Pompeo’s will be in the mix going forward as well, both uranium and rare earth metals will fall under increased national security scrutiny. If the US wants to develop autarky in these critical areas, investment will be required. Higher spot prices will create an incentive to grow domestic uranium production via in situ methods (i.e. uranium’s equivalent of fracking where solutions are injected into wells, leaving the rock in place but extracting the ore). Soy beans to China and Japan is not enough.

BHP’s Olympic Dam mine is Australia is still operating, but some expect the Australian government to allow some closures going forward, depending on how their COVID-19 containment efforts go. With 6,500 cases and 63 fatalities Australia is fairing much better than Canada which has 30,000 cases and 1,195 dead from C-19 at the time of writing (17-4-2020).

KazAtomProm of Kazakhstan have announced delays in well field development, a reduction in their operating cost base and lower capex. This is from the biggest and lowest cost producer. They produce 59mm lbs. per annum and recent announcements will see this fall by 10.4mm lbs.

France’s Orano has a mine in Niger which may see closure.

Demand flat to upward sloping. Resilient to any demand destruction given the highly regulated and fortress nature of global nuclear power installations.

Inventories are approaching critical levels at  both the producer and utility level.

USA, the  biggest uranium buyer (40%) is likely not keen to rely too heavily on Eastern Bloc for critical uranium supply.

Supply is reduced due both to mine closures due to COVID-19 and natural inherent constraints in the uranium supply chain (mine deletion, prices not supportive of greenfield investment).

Small % allocation warranted. The same skull & cross-bones warning as in 2017. Stops in place.

@numerco on Twitter for spot U308 prices and charts. I’m @firehorsecaper. Do your own due diligence. I’m giving you the scent, you must find the quarry.

Cameco Corp, $CCO.TO C$5.4bln mkt cap, >1mm shares traded daily. $CCJ in USD for those that do not want the currency worries.

KAZATOMPROM ADR in £ KAT.L Scant volume, but worth monitoring. Sperbank is the only Russia single name stock I would own, as an aside.

Previous COVID-19: THE ZOO IS NOT CLOSING, EVERYTHING ELSE IS
Next INSURANCE SECTOR: WHO’S ZOOMIN’ WHO