Never has relief been so fucking cool…

If you’ve been following along, you know that 2009 has not been kind to the RO. There has been lots of blood, large drawdowns, and a couple of blowups. So it’s nice to see nearly everyone do well together.

It’s the kind of day that renews confidence.

I have no idea what to expect tomorrow. My guess is that this was mostly short covering ahead of the Obama speech, but we had solid volume today and the VIX cratered so perhaps it will last a bit.

It would be nice to look back at this point in June and see a nice double bottom.

Today’s heatmap is the inverse of yesterday’s… 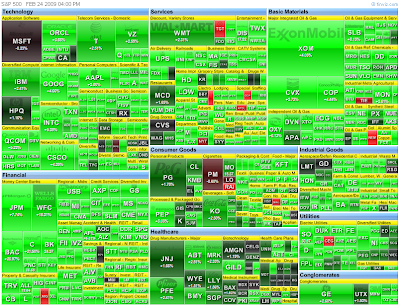 Since I got busy trading today, I didn’t have time to finish the Ed Seykota post. It will be up tomorrow.

Note: An * next to the trader’s name means it’s a swing account. Click here for all of the RO reports.  See you tomorrow.

Where would we be without them?

END_OF_DOCUMENT_TOKEN_TO_BE_REPLACED Meanwhile, my discussion of the Market Wizards interview with Ed Seykota is in development. I’ll either have it published midday today or tomorrow.

END_OF_DOCUMENT_TOKEN_TO_BE_REPLACED

Back when I was in grade school, I had this teacher who always used to complain that us kids were running around like “chickens without heads.” As an adult, I recognize that this teacher was probably somewhat disturbed.

However, the image has stuck in my head and today I get to use it because I watched CNBC. Every person who was on CNBC today was running around like a chicken without a head, with the exception of Dylan, who is a bit cooler than most. No one knows what’s going on… all anyone has are questions… it’s a great mess.

People are a bit freaked out, and rightly so. Trader P pointed out to me that we’re almost exactly 50% off the Dow highs of 14,198 set back in October of 2007. It’s an amazing and swift giveback. However, unless you’re among the lunatic fringe who, sadly, seem to frequent “the Fly’s” site almost exclusively now, you can see it in a positive light.

I traded very lightly. I’ll continue to do so until I get a consistent trade going… a trade I see over and over again and that works. When this happens, my confidence will come back and I’ll start trading heavier again.

I know I am not the only trader suffering from confidence loss right now. The RO got slammed. But, like the market, I plan on being around in 10 years. In 10 years, these couple of months of drawdowns will be a blip. 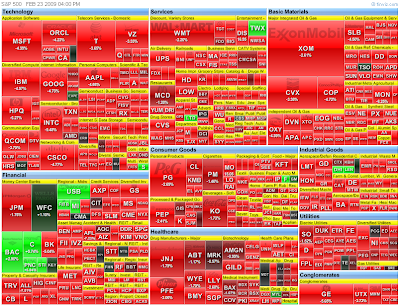 END_OF_DOCUMENT_TOKEN_TO_BE_REPLACED

It was with some hesitation that I decided to take the keys of this blog from “the Rage” for a week.  He has done a fine job of building a loyal readership around here and I didn’t want to fuck that up.  But then I reconsidered… “Okay… I’ll fuck it up just a little bit,” I said to myself.

Our styles are quite different yet, despite those differences, hopefully I can provide you with some entertainment.  Many of you know that I have been a friend to “the Fly’s” blog and to “the Rage” from nearly the very beginning of time.

For those of you who are not familiar with me, you can find a brief introduction to my blog here.  As it turns out, you’re catching me in the midst of my greatest trading drawdown in my 10 year history of trading, and I’m currently taking an indeterminate period of time away from the market.  Nonetheless, I blog on.

I’m not a part time trader, I don’t trade for fun, I trade for food.  Trading is my hair.  You’re not going to find “watchlists” or stocks that BTFO from me and I’ll tell you why: these things have never helped me.

As a trader, I believe you have to be an individualist, through and through.  You find your own ideas and you trade your own ideas.  If you rely too much on others you will most likely be a very mediocre trader or worse, fail.  That’s not to say that occasionally I’m not trading the same stocks that show up on various internet watchlists.  The point I’m trying to make is that if you’re serious about trading, you need to find these stocks in your own way.

And so my blog isn’t about you or what you should be doing.  My blog is about me, what I’m doing, what I’ve done, and it helps me keep my thoughts organized.  It has gained a decent readership since its inception 2 years ago and that’s cool too, but I’ve always maintained it for myself, not random “Internet retards.”

So look, I’m just going to cross post from my blog to Rage’s blog.  I have a few things working, and perhaps despite my trading hiatus, I’ll throw up a couple of RO posts.  Below, is what I posted to my blog this morning.

“Out of opposition, a new birth.”

Meanwhile, check out this article to understand why a new birth my be our only option.  The old patient is cold.

UPDATE: IMPORTANT: The so called “Trader Tax” would be the end of proprietary trading as we now know it. It would place at 0.25% transaction tax on “the sale and purchase of financial instruments” including stocks. It is in a bill, H.R 1068 which is currently being debated for passage. If you are a proprietary trader, you need to write your congressperson to voice your opposition today.