Since I couldn’t get my act together to write a new post, this is a reprint of my history post from last week. I try to publish one of these each Wednesday over on my third-tier blog. Enjoy, or not.

Behind each flash of red and green on a stock trader’s screen there is a story to tell.

Back in 1999, many of those flashes were created by “regular” people who had just opened Ameritrade accounts. They were driven to the market by the “tech bubble” and their newly acquired access to real-time quotes. They abused the letter “e,” which quickly became the world’s most overused prefix, and buzzed about initial public offerings.

Seemingly sane analysts were on CNBC plastering ridiculous price targets on companies that were nothing more than a vague idea and a ticker symbol. Surely there were some who protested, but the vast majority in the media claimed that things were “different this time” and that the economy had fundamentally changed. The bulls were released through the TVs that hung from the heavy steel brackets over our trading desks. As professional proprietary traders, we were like sharks swarming to devour the chum they tossed to us.

Unfortunately, the bulls also found their way into the living rooms of unsuspecting Americans who had a friend that “cleaned up” in AOL.

CNBC hit us all with an intoxicating combination of cold analysis, sex and humor. The men in pinstripe suits with gelled hair spoke of fundamentals while a young Maria Bartiromo bumped and grinded with the traders on the floor. Joe Kiernan and David Faber acted like they were fraternity brothers, Mark Haines was your cranky uncle, and during commercial breaks, humorous online trading commercials sold the stock market to a new generation of investors.

The overriding message was, “Hey you! Why are you letting the rich guys make all the money? Any monkey can figure this shit out! TRADE! LAUGH! CHECK OUT MARIA’S TITS!”

Since we’re so far removed from those times, let me give you a quick reminder of what things were like. The case of the Linux IPO was not uncommon. The stock was initially priced between $11 and $13 a share. A week or so before the IPO, the price had doubled to $22. When it opened for trade, the first open market transaction was for over $300 a share! But the lunacy wasn’t reserved solely for the NASDAQ stocks. Corning, the glass company traded on the NYSE, gave us our fair share of excitement. You can find their bowls in your mother’s cabinets. In 1999 though, all anyone cared about was fiber optics, made from GLASS, and we watched as this tame company went from $15, to $115 and back to $15 in about a year.

In 1999 if anyone suffered from an anxiety disorder, it wasn’t brought on by Osama Bin Laden or by their mountain of mortgage debt… Instead, people were afraid of missing the next big thing. But because no one knew anything about the companies being promoted, the common reaction was to buy first, just in case, and ask questions later. Xcelera anybody?

Indeed, this was the free-money era for investment bankers; the regular guy was in the market buying and the professionals were selling to him.

Weird stuff was happening every day, but to a new trader like myself, it didn’t seem weird at all. This was the environment in which I was learning. It was sort of like growing up in a household where your Dad was a lion tamer and you didn’t realize that this was odd until you were older.

The bustle and the energy from the exchange lifted out of our screens in those red and green flashes and drew us in. This was way before the anonymous hum of the hybrid market. The energy then was more visceral and personal. It was as if you could feel the pain and greed in the quotes. A big offer was lifted and you felt the flood of elation. A huge bid got smacked and you could almost see the bulls hang their heads.

And I was there, creating my own red and green splashes on the screens.

Early on, I remember focusing on three stocks: RDN, AVY and MUR. No one pulled me aside and told me to watch these stocks… in fact, no one told me anything. The only guidance I received was to watch the broad market, as 3 of 4 stocks move with it, and take my cues from there. I learned to search out stocks that had at least a one-point daily range, were priced between 10 and 100 dollars a share, and traded upwards of 200k shares daily.

I had good days and bad. At the end of my first 8 months, I came away with a respectable $40k. Looking back, I was being way too conservative. If anything had to fundamentally change it wasn’t the media coverage, it was the way I viewed money. Surely, given the huge price advances on display one was almost encouraged to think that money wasn’t real.

This was also spurred on by some of the traders surrounding me and how they dealt with huge gains and losses.

END_OF_DOCUMENT_TOKEN_TO_BE_REPLACED

When one trader “sprays” the rest of the office by more than doubling the second best trader, he gets to pick the evening musical selection. So this is “Trader A’s” choice. A good one.

END_OF_DOCUMENT_TOKEN_TO_BE_REPLACED

I’m not going to throw a party or anything, but it appears volume has returned to the market. Two days in a row we’ve traded over 1.5 billion on the NYSE.

I was very hopeful at 3pm when the market was ripping and the financials were leading. When we decide to go higher again, the financials are going to have to lead. Also, the fact that USO climbed higher and was pinned to the highs was positive.

Unfortunately, we’re in a nasty bear market and rallies get absolutely no respect.

I hate late day reversals… always have a hard time trading them.

The good news is that we had a full on “spray” by Trader A. As you know, that means he picks tonight’s song. I will post it later. He led the Bosses to victory. 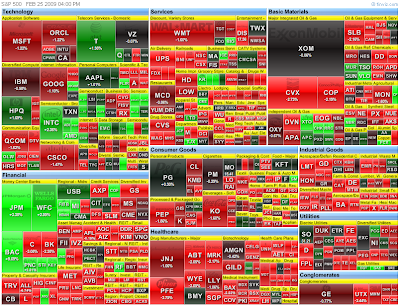 END_OF_DOCUMENT_TOKEN_TO_BE_REPLACED

Another Person Who Shouldn’t Trade

This is a perfect example of a low probability setup. Traders always need to balance risk and reward. This here was all risk…

END_OF_DOCUMENT_TOKEN_TO_BE_REPLACED

While it is already being derided by a certain so called “first tier” blogger, I will submit that it’s much nicer to have a President who sets lofty goals during a time of crisis, instead of one who tells you to “go shop.”

END_OF_DOCUMENT_TOKEN_TO_BE_REPLACED

A reminder that polio still plagues much of the world. Why the fuck not?