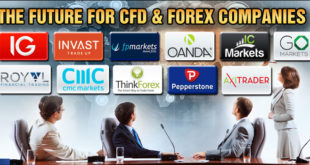 The U.K. Financial Conduct Authority (FCA) sent shivers down the spines of CFD (aka spread-betting) providers yesterday with the release of their consultation paper, outlining plans to crack down on the sale of certain derivative products, including CFD’s and binary options to retail clients.

IG Group Holdings, formerly a £3bln + market cap player in the space was the biggest “mover” on the news, and as one might expect, the move way not up. IGG.L fell 38% to 485.1p, shaving £1.4bln off their market cap. Their market cap stands at £1.7bln.

Another notable decliner was CMC Markets (CMCX.L) which also fell 38% on the day, closing with a market cap of £330mm. Plus 500, another provider noted a “significant financial impact” on their UK business after the FCA proposals, estimating a 20% reduction in revenues on stricter rules.

From the Australian Securities and Investments Commission (ASIC): thinking-of-trading-in-contracts-for-difference-cfds

CFDs were born in the U.K. in the 1990’s, the brainchild of UBS Warburg staffers. Retail began to get involved in the late 1990’s via a firm that was eventually bought by MF Global. IG Markets and CMC Markets are credited with expanding the popularity of the product from 2000 onwards.

The most popular head office domicile for providers include the US, Cypress (regulated by CySEC, the Cypress Securities and Exchange Commission), and the U.K. The only actual US based, CFTC regulated provider in the US that I am aware of is Nadex  (North American Derivatives Exchange) https://www.nadex.com/ , former known as HedgeStreet, which was formed in 2004 and bought by IG Group in 2008.

IG has a long history. It was formed by Stuart Wheeler in 1974, Investors Gold Index as a way for retail to trade gold prices as an index instead of trading the underlying commodity. The IG group is now one of the UK’s top 200 firms (up until yesterday at least) and is listed on the London Stock Exchange and the FTSE 250. IG posted net income of £131.9mm on revenues of £427mm in 2015. For 2016 through May they have a £207.9mm profit before tax on revenues of £456.3mm.

In the United States, under the Dodd-Frank Act, CFDs are considered to be “swaps” or “security-based swaps,” depending on the nature of the underlying on which they are based, and are subject to the regulatory framework for those products established by Title VII of the Dodd-Frank Act. For example, a CFD on Apple common stock would be a security-based swap (SBS) subject to the regulatory framework for SBS established by the Dodd-Frank Act. Under the Dodd-Frank Act, among other things, transactions in SBS with or for retail investors must be done on a registered national securities exchange and offers and sales of SBS to retail investors must be registered under the Securities Act of 1933. The CFTC has taken swift action when players misstep and market to US-based investors. http://www.cftc.gov/PressRoom/PressReleases/pr7341-16

Many jurisdiction, including the U.K., regulate CFDs and binary options under their respective online gambling rules (fixed odds gambling). The U.K.’s FCA has signaled via their consultation paper that the rules for binary options will be moving from being regulated by the Gambling Commission to the FCA under their interpretation  of the scope of the Regulated Activities Order of MiFID ii (The Markets in Financial Instruments Directive). The U.K. remain uncertain of what investor need is addressed by these products (30 seconds to 1 week time frames typical) and noted that 82% of clients lost money.

CFD providers expanded into binary options as the competitive landscape changed. Some are also offering a suite of leveraged ETFs for less aggressive traders.

It remains to be seen if the move in IG Group stock has been a overreaction.

It is said that there are 3 ways to lose money. Farming is the most certain, but gambling is the quickest. JCG