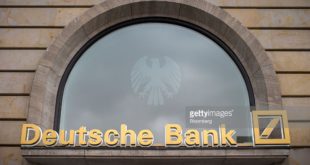 “Here be Dragons” means dangerous or unexplored territories, in imitation of the medieval practice of placing dragons in uncharted areas of maps. With respect to considering an investment in Deutsche Banks’s (DB) equity, I would argue we are instead dealing with “known unknowns”, as Rummy would put it.

Much of the risk and potential upside going forward hinge on non-financial risks, legal being #1. DB has now paid $9bln in fines, 1/2 their current market cap of $18.2bln, for various settlements post GFC. No opinion to provide on the validity of any given case from a merit or $ perspective, but clearly through a process of elimination, DB is closer to the end of the financial spartan race. The ability of John Cryan, chief executive of DB, to reduce the dominance of litigation charges from results going forward will dictate the very survival of the bank that led the financing of Germany’s economic miracle post WWII. Those drawing parallels to Lehman are data mining in my view, DB is too important to the German, European and Global banking/financial system to be euthanized. 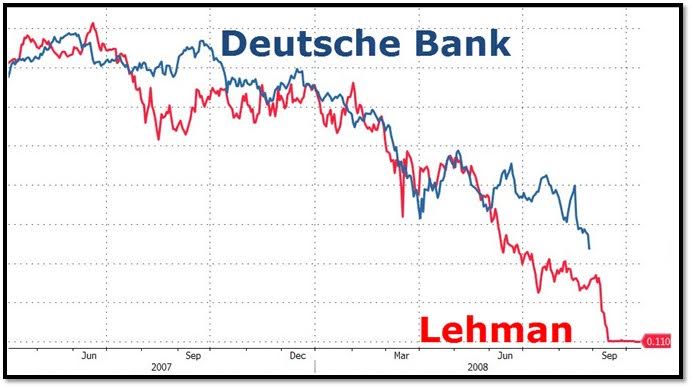 2015 was the kitchen sink year for Deutsche Bank. Litigation costs and re-structuring charges led to a €6.8bln reported loss. GM was once appropriately described as a health-care company that also made cars. DB is a law firm that dabbles in the capital markets and asset valuation. Modest earning are expected for full 2016 ($1.11 per share), but the first “clean” year expected by chief executive John Cryan is in 2018. 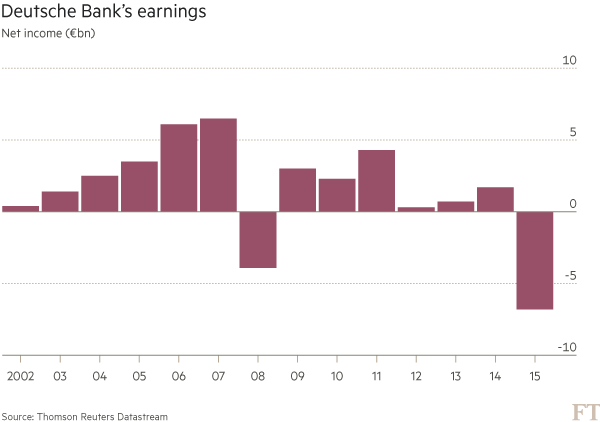 Fixed Income Currencies & Commodities (FICC) has become a dirty 4 letter acronym for many players in the capital markets in an environment of ZIRP, since trumped by NIRP. The transition from Anshu’s Army (once responsible for 85% of DB “earnings”) to Cryan’s Janitors has clearly hampered returns. DB was a top 3 players over the 2008-2014 period, earning approx. 20% “share of wallet” in FICC. This share has slipped to 17% and is not trending well, with share ceded to venerable competitors like JP Morgan (JPM is now trading at 1x book versus 0.25x for DB). Approximately 1/3 of the slippage has been expected as DB exited high risk weighted asset (RWA) businesses they no longer have an edge in. Risk reduction efforts include improving the leverage ratio (CET1/total adjusted assets) to 4.5% by the end of 2018 and 5% by 2020. DB has run with leverage as low as 2% previously and the leverage ratio currently stands at 3.4%. Daily VaR (99% confidence interval), has dropped 57% since 2007, from €86mm to €37mm. Liquidity reserves (HQLA- cash and highly liquid government, agency and government guaranteed bonds and other Central Bank clearable securities) as at Q2 2016 stand at €223bln, up 243% from 2007’s €65bln. As a result DB’s liquidity coverage ratio (LCR) stands at 124%, well ahead of the 100% required by Jan. 1, 2019 under B3.

Price to book and price to tangible book have become somewhat interchangeable terms in analyzing bank stocks post GFC. Few have sizeable goodwill yet to be written down. To temper expectations, DB would likely be over the moon if they could get back to 0.6x P/TNAV by the end of 2017 which would put the stock back in the high 20’s, roughly a double from the US$14 it stands at now (NYSE listing). This would put DB in line with where Citi trades, on a metric of price to tangible book. The list of  global banks that trade > 1.0x book is dominated by the Canadian and Australians (i.e. RY at 1.9x and WBK at 1.7). Wells Fargo & Company is the rare American that trades at a premium, 1.4x book at present.

The “to do” list for DB by the end of 2018  is long, but achievable; a 10% return on tangible equity, a leverage ratio of 4.5%, a 12.5% CET1/RWA (10.7% at present), efficiency ratio of 65% (perhaps the most challenging metric to achieve, low 70’s arguably more achievable interim step), and achieving €3.5bln per annum in cost savings by cutting 30,000 staff and the exiting 10 non-core markets. In their home market of Germany, plans include selling their remaining stake in Deutsche PostBank AG and closing >25% of their 700+ retail branches.

The largest dragon investors worry about with respect to DB is their sizeable otc derivatives book. The focus on headline notional exposure of €46 trillion materially overstates the true economic risk. Looking at the €46 tln notional amount of contracts across fx (27% of net exposure), rates (54% of net exposure), and index/equity (12%) can be daunting, but as with other areas noted, steps are being taken to reduce the size and improve the liquidity of their derivative books. DB intends to exit the CDS business for one and has novated over 2/3rds of their book to other cptys since 2015 (JP Morgan the biggest CDS player by wide measure). The previously noted number for level 3 assets include level 3 derivative related assets (DRA). As with the rest of the market, the vast majority of DB’s derivative contracts are centrally cleared. Those contracts not centrally cleared (i.e. bi-lateral contracts) are typically collateralized above rating based mark-to-market threshold amounts. A Credit Support Annex (CSA) is the legal document which regulates credit support (collateral) for derivative transactions. A CSA is one of the four parts that make up an ISDA Master Agreement, but it is not mandatory. Some classes of cpty are legally restricted from posting collateral and even impose 1-way CSA against their Bank cptys, although such instances are much more rare than pre-GFC. Banks are keen to renegotiate such legacy ISDA/CSA’s given the spike in the cost of funding their DRAs. 85% of DB’s net derivatives exposure of €41bln (after consideration of master netting arrangements and the €72 bln in aggregate collateral pledged to them, split €58bln in cash and €14bln in liquid securities) is with investment grade counterparties. Further, DB have disclosed that they actively manage their net derivatives trading exposure to further reduce the economic risk. This practice is common across the street where the credit valuation adjustment (CVA) desks are often one of the most active credit customers, given the immense scale of their books and their diversity as to cpty.

It appears a floor is in on DB equity. Near term, a lessening of the legal risk is the biggest factor in building capital to 12.5% from 10.7%. While a return to former glory is not likely in the cards, the combined view of Deutsche Bank is too pessimistic at present, in my view. DB is down 42% year-to-date in 2016 and 91% below their all time high of $159.59. The short interest in the stock is 1.68% of the float.

Less risky bank plays certainly exist, ING at 0.7x book on a move to 1x (they even make money in Germany, think FinTech) being one. JCG

END_OF_DOCUMENT_TOKEN_TO_BE_REPLACED 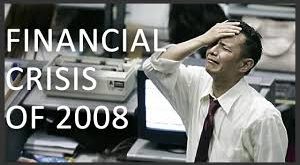 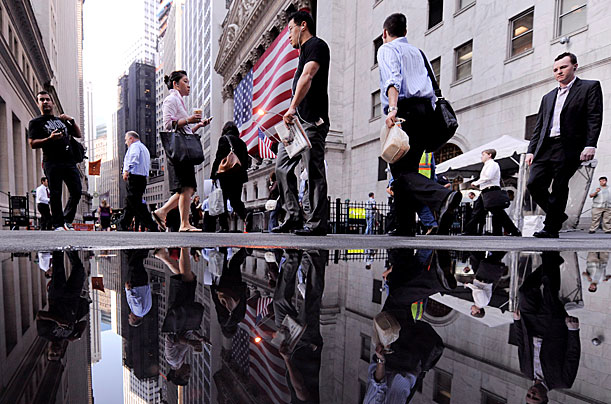 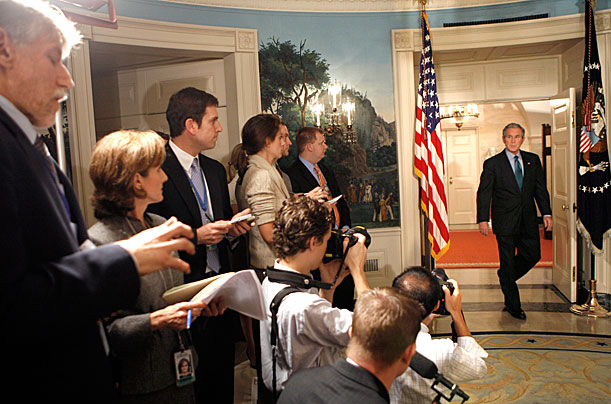 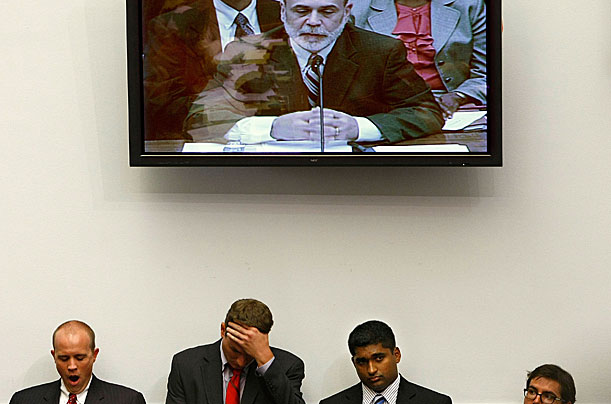 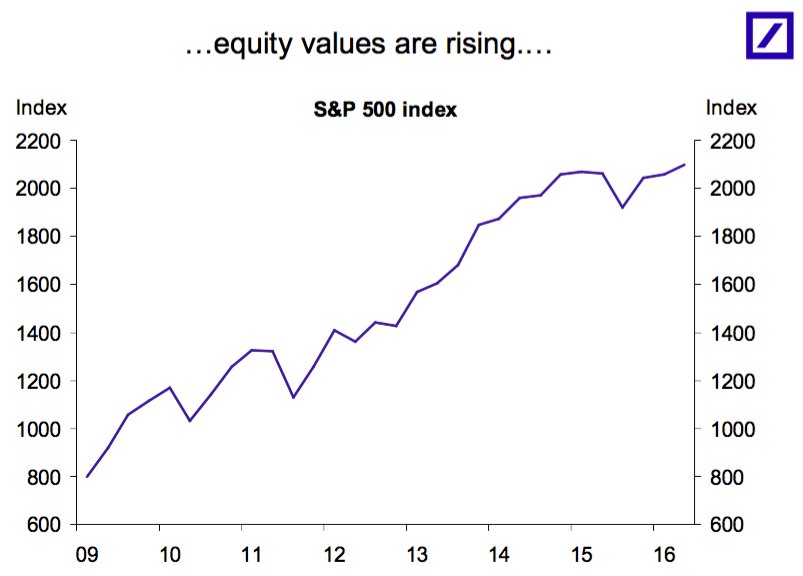