(Note: I meant for this to run yesterday, but it still fits after today’s action. Enjoy.)

Since August the markets have been jerked around. Violently. One of the more frustrating catalysts for traders has been the failed moves both below and above support. It’s clear in the indices as a whole, and even worse in single names across many sectors. I have prepared this very scientific chart to try and capture reactions at various points over the past 4 months (click for larger view): 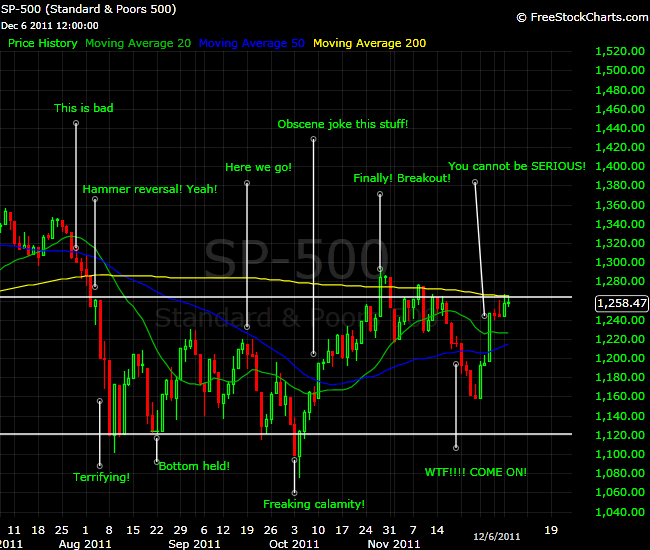 I want to talk about the two moves that have been the most disappointing, at least to me.

The Failed Breakdown of October 3
Busting through a very tested bottom, this looked for all the world like the big flush out. Had it really accelerated that would have been THE event that set up a solid run later on in my opinion. Not sure if it was technical buying there or if the Ghosts of V-Shaped Recoveries came into play on intervention hopes but the reversal of the breach was sudden and clear.

The Failed Breakout of October 31
I had outlined my reasons for a move up in markets around mid October. It was working well. As the top of the trading range loomed all eyes were focused. The S&P pierced 1265 and things looked poised to base and move higher. That was an ephemeral (told you I would work it in to a post!) belief as again, the reversal back down was pronounced.

And here we are again.

The failed moves are what keep me from really deploying much capital. Trading sentiment now has shrunk time frames to hours or maybe a few days at most. Technicals are all the rage. Thursday into Friday promises to be a very volatile environment as the news will be flowing fast and furious. Unless the Euro powers get something done, all the forecasts for much of anything are not going to amount to much.

Have a good night.