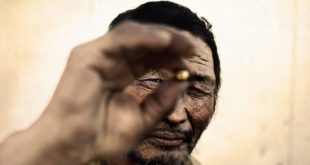 I meant “gubs,” or, as Woody Allen would have it– “Shootin’ Irons.”

Just kidding. LABU has been great since $24, but you might want to dial.it back a bit until $XBI is safely over $60. Then, by all means…

Core holdings, $CELG, $GILD and $BMRN. Like Walt Disney and Ice Cream, this is the new America.

END_OF_DOCUMENT_TOKEN_TO_BE_REPLACED

I must admit I’m amazed at the resiliency of humanity.  I’m amazed at the tendency for things to right themselves through natural and perhaps quasi-divine processes.  I guess, like physics, economics have laws that cannot be contravened, though perhaps they can be more easily bent for a period.  We can rest assured, however, that like gravity’s effect on a rubber ball bounced off the tarmac, we are assured of a rebound by nature.

One true economic law is you will get what you incentivize, if you will forgive me that vulgar neologism.  When this country was formed it was a haven for the oppressed and those seeking a new start, true.  But it was also an immediate draw for those whose nature tended towards the burlesque, the hustle, and even the long con.  The rule of law was late to the game and sometimes absent, so those who survived even in the great cities of the 18th and 19th centuries did so on wit, courage and often times some manner of guile.  That formative chemistry served us well for almost 150 years and provided us not only with the capital, but the innovative drive to subdue the wilderness and become traders on a scale never before seen in history.  Our frontier justice and hustler’s creed, in a sense, turned a soup of opportunity into a civilization whose standard of living surpassed those of the wealthiest Romans and Turks at the apex of Empire.  All of that success a result of incentivized behavior.

After less than 150 years, we turned to the Age of Statism.   It is no modern age, of course but rather one visited and revisited by mankind numerous times over the course of his recorded history, and now so again in America.  The draw of Statism reflects man’s nature — his desire to consolidate power and impose his will upon the many.  Dressed as chivalry and noblesse oblige prior to the Enlightenment, this will to control comes dressed in similar patronizing robes today — first for your children and later ensuring your eternal childhood.

The statist door, cracked by Wilson, thrown open by FDR and later Johnson and Nixon, is now blown off it’s hinges by Obama and his club of cronies.  The Constitution, once the citzenry’s protection against such thuggery, now lies in tatters, largely ignored if not openly mocked.  Where our originating culture had once incented hard work and innovation, our new state insinuated the easy out of the dole and the forgiving excuse of eternal victim-hood.  Corruption became not some invasive element to be combatted, but a necessary institutional tool as it has been for centuries in lesser governments the world over.

What lies ahead for us, amidst the foundering bread and circuses, as the microcosms of statist corruption– the Detroits, Chicagos,  and San Bernadinos — silently implode under the weight of their diseconomic burdens?

Are these municipalities harbingers of a greater collective future?

Will the country split?

Or will we reform under a renewed interest in localized solutions and community building?

I can only hope for the latter as  I prepare to cope with an increasingly sclerotic and burdensome, top-down authoritarian system that will be punctuated by misery, increasing poverty and failing infrastructure.  Compound interest can be a terrible thing when arrayed against your interests.  And that interest is coming due, one way or another my friends.

Ben said he wasn’t going to allay his QE moves today.  “Surprise Suprise!” as Gomer Pyle was wont to say.   Apparently, Ben is prepared to go out with a bang.  Let’s hope it’s smaller than the Big Bang, eh? Concentrate on the high quality stuff for now.  I was buying more AEM, RGLD and SLW today.  Everything else will be increasingly risky, so you may want to just stick with the ETF’s.  If you buy NUGT, make sure you have a call selling plan firmly in place.  Same goes for AGQ.  Best to you all.

END_OF_DOCUMENT_TOKEN_TO_BE_REPLACED 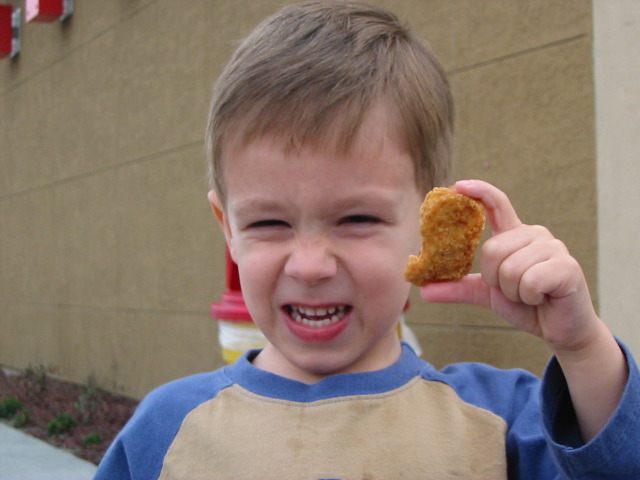 END_OF_DOCUMENT_TOKEN_TO_BE_REPLACED

Crushed? Debilitated?  Blown out beyond all reason?  Yes, you could say that.

Neidemeyer?  Dead!  (Ok, so Animal House was on tonight)

What’s even crazier is the stretch $HUI has taken below it’s 200 day moving average, the traditional “revert to the mean” line of demarcation.  Usually, if we get more than 20% below that level, we are going to see a reversion.   We are now 46.5% below the 200 day Simple Moving Average.

If I had any credibility left I’d tell you I’m looking for a bounce here.  So maybe consider that comment ironically, if that helps…. 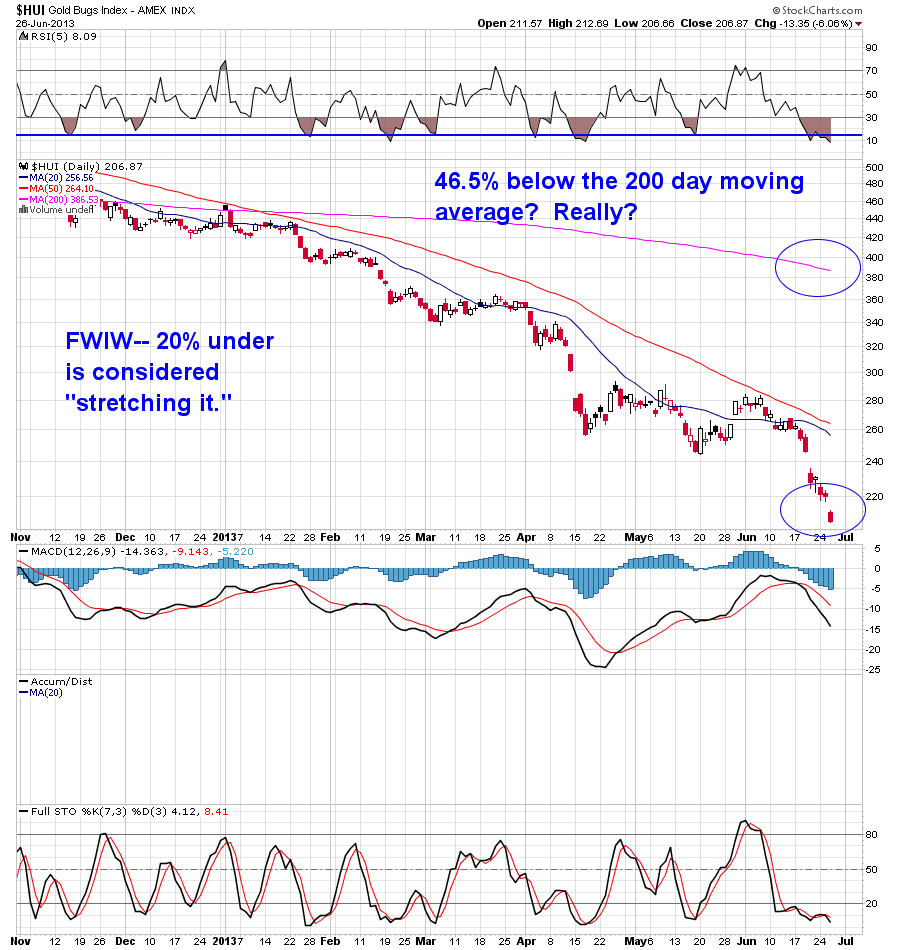 My best to you all, really!

END_OF_DOCUMENT_TOKEN_TO_BE_REPLACED

I think gold’s flirtation with $1400 is drawing to a close, and we will soon join the great asset swell.  I am thinking about a small “opener” in NUGT.   I’m of the mind we will proceed to $20 with long due haste, where many gaps will be filled, to much rejoicing.

Then we will rest.

The nice thing is that we could get knocked back to $10 before the morning even starts, but that would be an even better launch pad.  Play with stops at the lows.  That is all.

And yes, even the dogs will have their day here soon, but why not start with the more quality stuff? RGLD, SLW and AUY, along with the dividend bearers (NEM and AEM my favorites).

END_OF_DOCUMENT_TOKEN_TO_BE_REPLACED

Can Early Favorite Orb pull a “Big Brown” and win from the far outside post position?

Gold an silver seem to be hanging in reasonably well, here, and $1,450 seems to be holding well. That’s a level to keep your eye on. In the meantime, I like AUY, NEM, AEM, and of course SLW and RGLD. All on sale now.

As for the Derby itself, I have to admit a certain loyalty to Rick Pitino’s magic horse, Goldencents, which, donning Kevin Ware’s #5 at Santa Anita, scorched the pack for the highest Beyer speed rating of any of the Derby preliminaries (105).  Nobody else came even close to that in the Derby prelims, which lends the cold credibility.

I also like Normandy Invasion, and not just for the cool, retro-WWII name.  I liked the way Normandy was making good time to almost overtake Verrazano in the Wood Memorial at New York’s Aqueduct Racetrack last month.  That race was a mile and an eighth.  I think with the extra 1/8 of a mile left in the Derby, Normandy should be sitting pretty.

Last I like the big winning colt, Orb… caution, this horse will likely be the favorite once all the Louisville Cardinal fans (Pitino’s GoldenCents) and multi-Derby winning jockey Calvin Borel fans (he will ride mud horse favorite Revolutionary) get too drunk to remember to bet by the 11th race.  Orb has done nothing but win, and is coming off a sparkling win in the Florida Derby.  The problem with this horse is it’s coming off the 19th hole, which has been a traditionally tough place to win from.  Big Brown, however, won from #20 position in 2008 (see above) so anything is possible if you have a super horse.  The question remains… is Orb enough of a Super Horse to win it?

Tune in tomorrow evening at around 6 pm on NBC!  Look for me hanging off one of the balconies, hopefully not by one of my more delicate extremities.

Best to you all, and happy happy Derby!