After the dust settles…

Take a look at the weekly SPY chart below:  The next few trading days will decide if this May 2008 high will be a resistance to this rally or a support for further end-of-year rally. 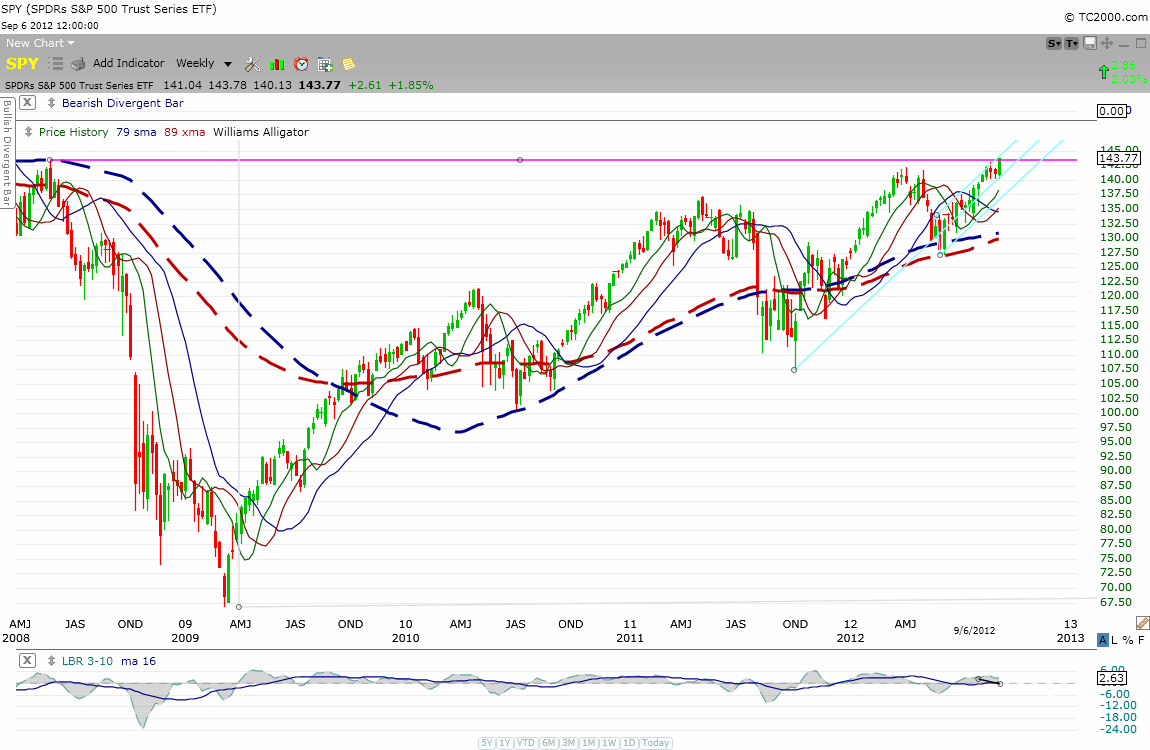 Currently, my biggest position is in AMRN (18% of portfolio).

To iterate, I like AMRN because of their recent FDA approval of their drug Vascepa for the treatment of very high trigylcerides (technical term for cholesterol).   AMRN also has been receiving “allowance” for several patents out of the 25 they submitted.  The speculation here is the potential take over by a major pharmaceutical company for a projected price of $20+ per share.  Because any potential take-over news can be unexpected and sudden, I’m more inclined to give AMRN more room for the price action to jump around.  I’ve been buying and selling AMRN since $12ish so I’m sitting in plenty of profit to cushion the volatility.  But that doesn’t mean I want to give the profit back; nevertheless the reward for a takeover announcement  is more than justifying the risk I’m taking.

Below is the daily chart of AMRN.  Notice the inside green candlestick bar.  I see this has a bullish stance even though it is not a full Harami candlestick formation which required  the previous red bar to be at the bottom of a downtrend. 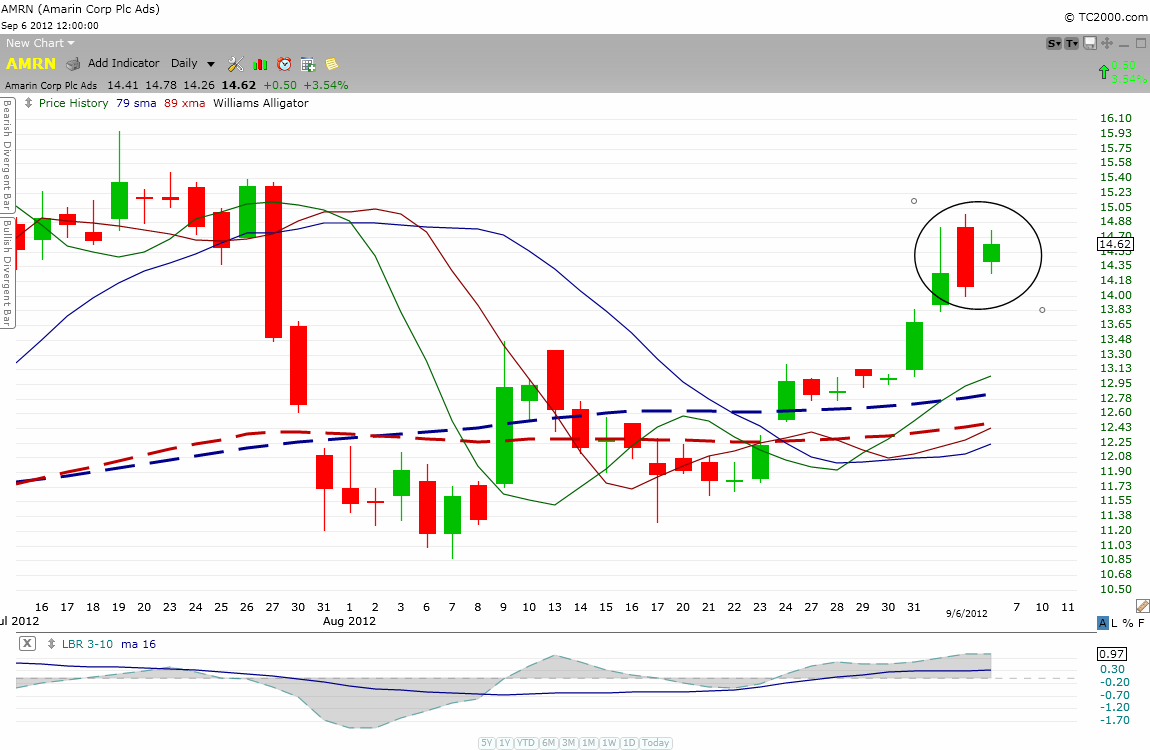 My 2nd large position is in GLOG (14% of portfolio)

LNG (liquefied natural gas) is here to stay and it is not going away.  Foreign countries will want a lot of cheap LNG from the US and GLOG has the ships (and more new ones to come next year) to handle the extra volume.  I’m also inclined to give this one more room to gyrate around since I’m betting the price to increase gradually as we come close to the launching of the new ships in early 2013.

Below is the daily GLOG chart.  Notice today formed a doji candlestick bar after 4 down days.  A doji after some correction may be a signal for a bottom and a possible reversal. 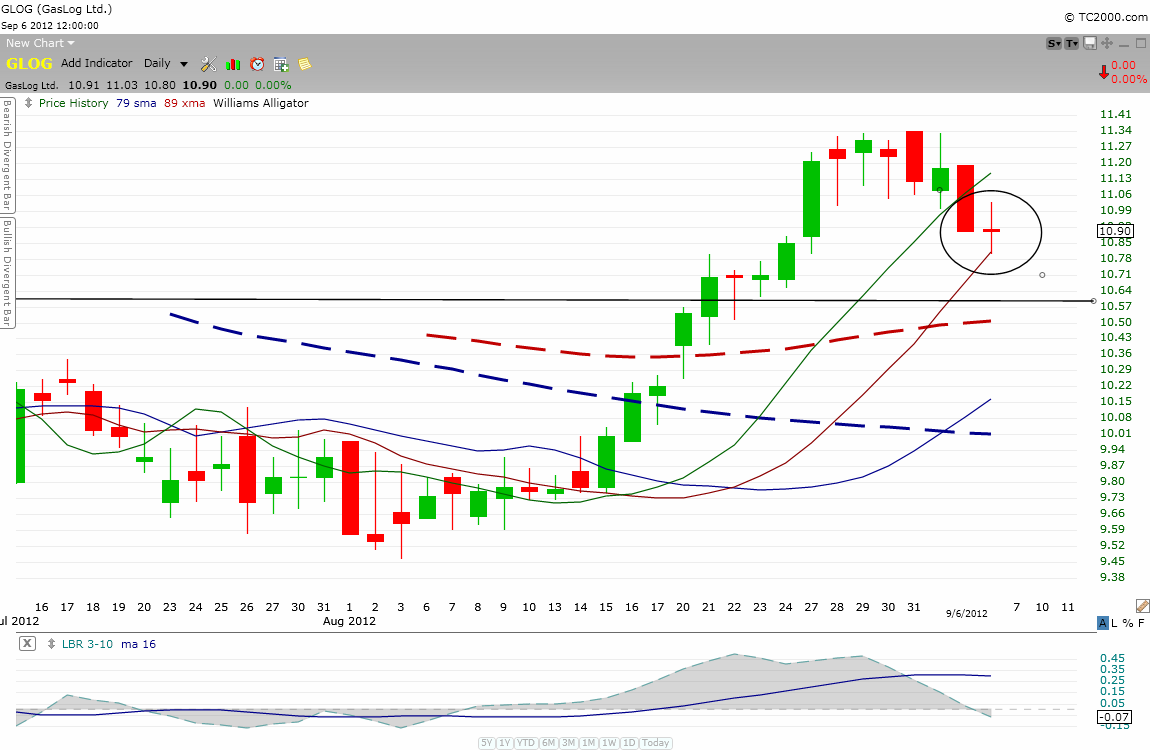 The rest of my portfolio, in order of size, are the following:

I bought The Fly’s pick on NFLX because the daily chart of NFLX today has a very nice bullish reversal setup and also a double bottom b/w early August and this week.  Besides my risk is low since my stop will be below the low of Sep 4th. 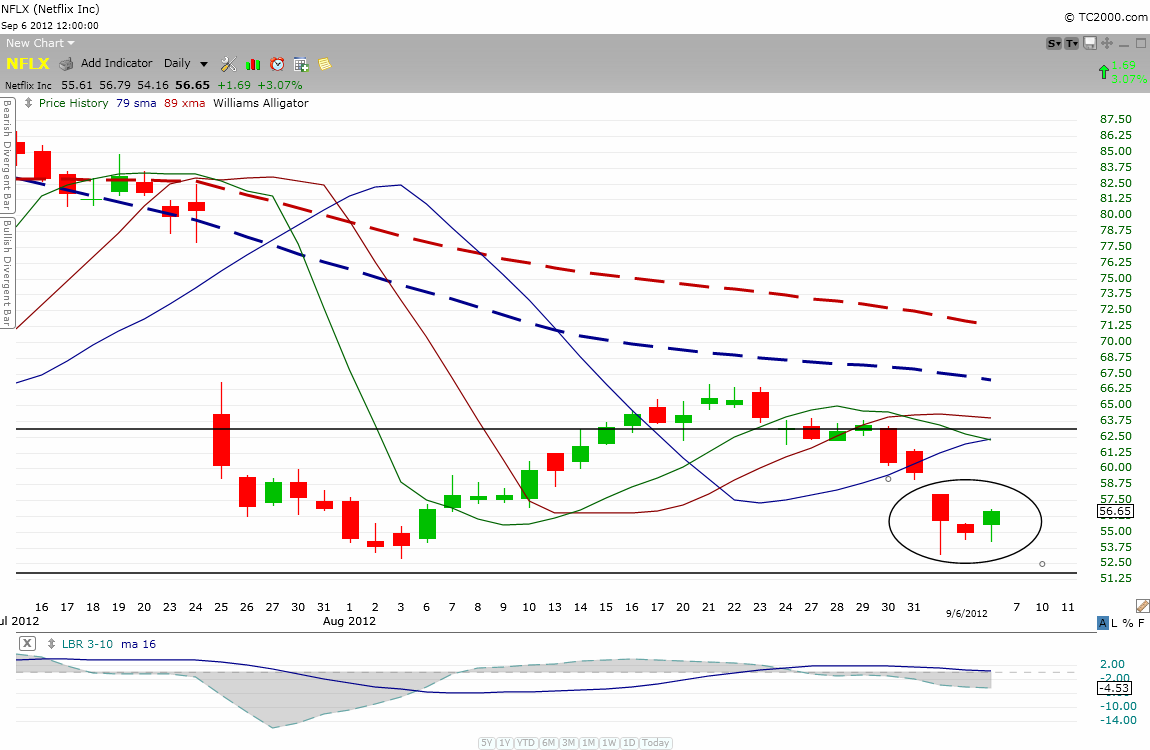 END_OF_DOCUMENT_TOKEN_TO_BE_REPLACED

I’ve to give it to the Bull; today price action is quite a ride from a bear attack to a bear heart-attack!

Below is the SPY daily chart, take a look at the beautiful green bar in today price action.  It took out the lows of the last 2 trading days and then turned around for the greener pasture.  One thing to be aware of is the divergence in the momentum indicator below. 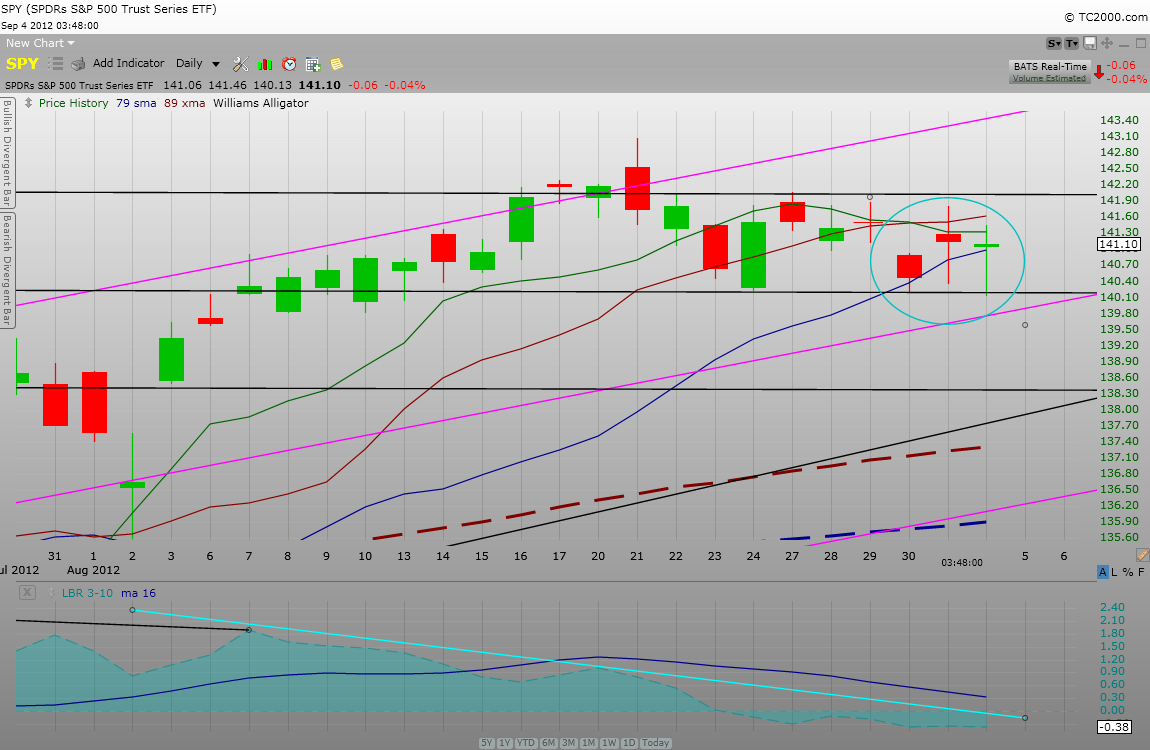 Although I sold a chunk of my AMRN and all of my GLOG this morning; I bought them all back when I saw the intra-day trend change.  I paid only a bit more for GLOG but paid quite a premium to buy back the AMRN shares I sold this morning.  In the scheme of the bigger picture, it is my opinion that the premium I paid to get back on AMRN will be insignificant IF (a big IF) there is a takeover or merger coming in the near term.   The way the price action behaved today, it seems like everyone is gambling that something will happen soon.

Below is the 15m AMRN chart.  I ended up buying back AMRN in the mid-$14 after I sold a bit below $14 in the morning.  Well, that’s the way I have to roll when I’m following price action. 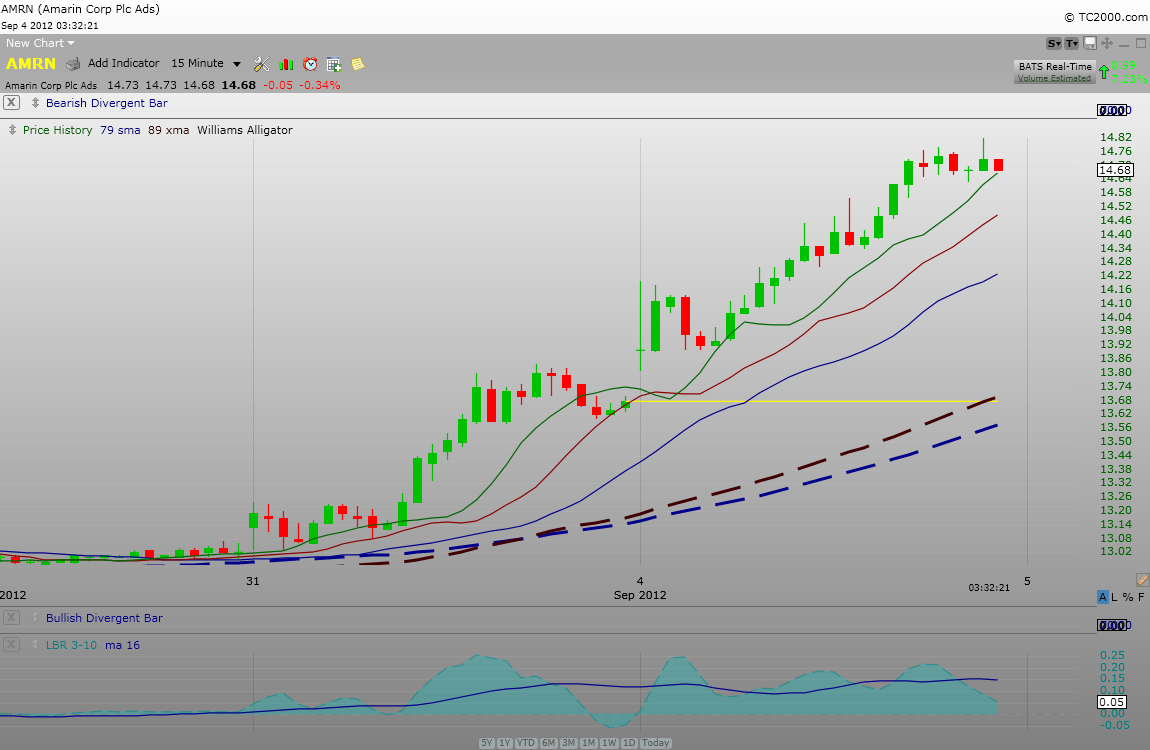 Below is the daily chart of AMRN.  Now, did someone know something?  The way I see it, the chart always give you a head-up. 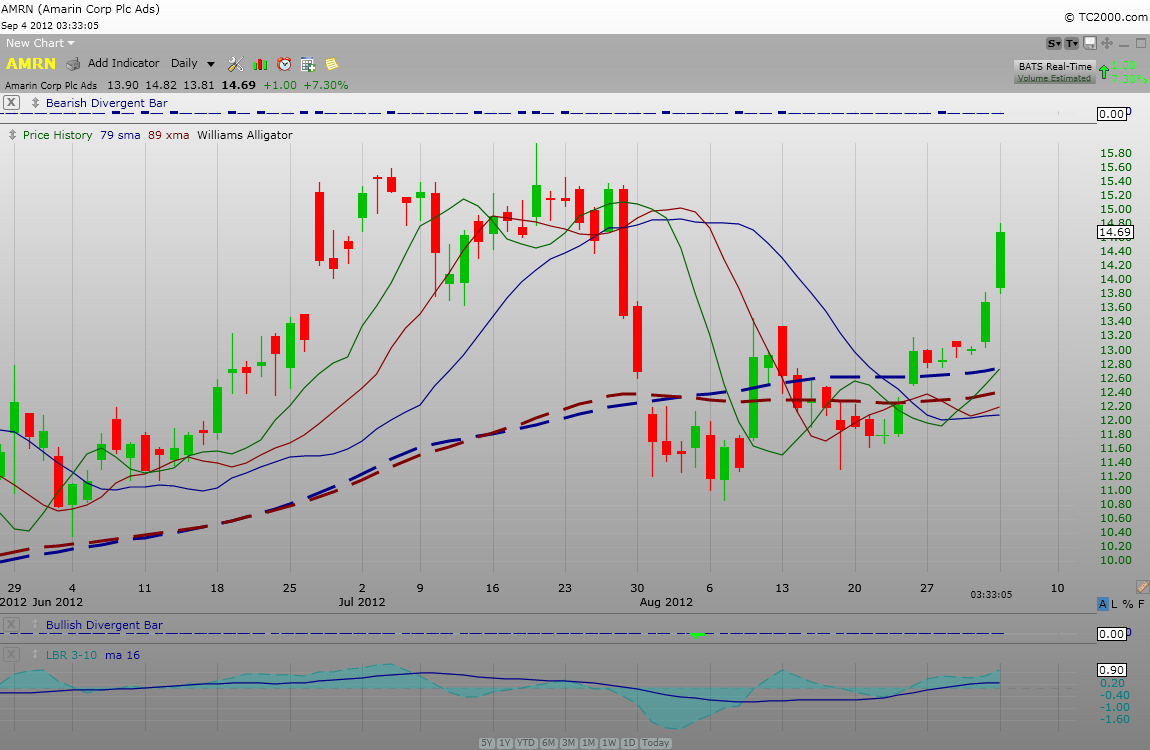