Is April a good month for $APRI

I’m betting it is.

$APRI has this special ointment that will give you an erection if you are not suitable to take Viagra; theoretically,  you escape all the side-effect of Viagra.  I traded and made money on this one before and I believe its time has come again.  They have partnered with Abbott to launch their boner-medicine, Vitaros, in Canada.  They are expecting a full launch in the first half of this year; thus, giving that it is April already, can news of coming full launch be the catalyst to drive the price up?  Please click here for more information if you are interested.

Meanwhile, the chart looks like it is ready to move up. 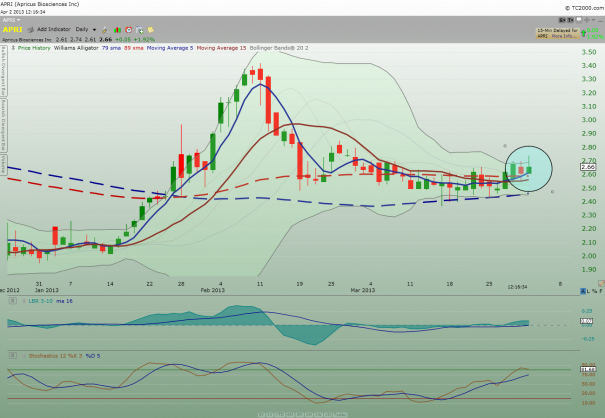 I bought a starter position on $APRI this morning as well.

END_OF_DOCUMENT_TOKEN_TO_BE_REPLACED

Is mannkind breaking out from here?

This one is a biotech stock which I have shy away in the past because they have this inhalation for diabetes medicine.  I was thinking, “who want to inhale insulin into their lung for diabetes?”

But then I asked myself, “but isn’t that how people get high on pot anyway?”

So, giving the daily chart showing a breakout; I bought a starter position. 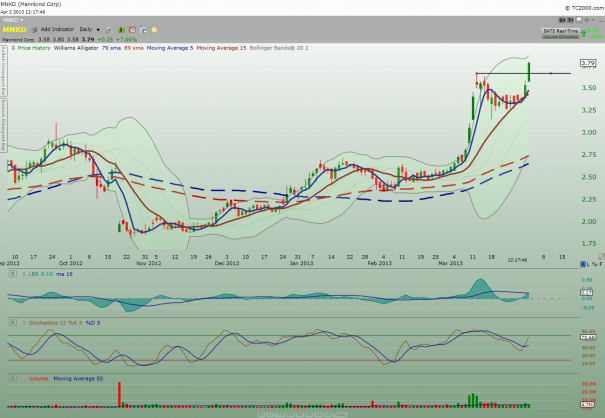 This post is not as timely as my twitter update since I’ve bought $MNKD earlier than when I’m typing this post.   I got pulled away not too long after I bought.  Therefore, please follow me on twitter if you want a timely update on what I’m up to.

END_OF_DOCUMENT_TOKEN_TO_BE_REPLACED

I had a busy trading morning which was not necessary a good thing.

$FB opened higher and headed higher, without thinking I automatically added to my position; but later on, the steamroller ran out of steam and I decided to sell the whole lot since it was taking out the mid-point of the bullish engulfment bar established last Wednesday.  One of my rule is that if price retraces more than half-way from a previous bullish bar, stand aside to see if the bear has leg.

$DCTH had me running in circle in the opening hour.  It opened to a neutral to higher open and then price started to tank.  I immediately sold 2/3 of my position to lock in profit from last Thursday.   Then price began to trek back up to neutral so I decided to buy back some to bring my position up to 2/3 of the original size.  But it was not to be.  Prices again went down along with the overall market and I just had it.  I sold the whole lot to protect my remaining gain from last week.  Afterward, I watched and watched.  Price action began to stabilize and the bids were coming back.  Slowly it began to creep back up to neutral.  Seeing that there were no more big sellers coming into the market, I decided to buy back slowly until I had 2/3 of my original position.  By end-of-day, $DCTH had a last minute dash to the upside; therefore, I’m in good shape here.

Do I regret selling some $DCTH earlier such that I’m now holding only 2/3 of original position?  A resounding NO.  I adjusted my risk profile accordingly and I lived by it; otherwise, I would be saddled with indecision all the times.  Be steadfast on your decisions and accept them as part of your normal business as long as you follow the principles of risk management; before you know it, you will no longer second guess any decisions you make.

Meanwhile, $PACB was on defensive all morning so I sold my lot for small losses so I didn’t have to waste time to manage it.  From hindsight, it was a good decision since it tanked 6% for the day.  You see, if you play defensive when you are at risk, in general you will be “ok” on average.  Overtimes, the big win you are able to catch will make your win a truly bankable event.

$CHK looked bouncy so I bought some; however, at the market began to turn the tide to negative, I dumped it quickly for breakeven.

I added to $DDD because it gapped up and the morning retracement seemed to settle down.  However, the act of selling $CHK also prompted me to sell $DDD to lock in profit as well.  Later when $DDD settled down again, I bought a starter position with a stop below the intra-day low.  It was for naught since I got stop-out later for small losses.  Basically, I only gave back a bit what I gained today due to the gap-up.  Overall, I still made money with $DDD from last week and today.

With market turning negative, I started to look for swing trade to close out position.  I saw $GLOG and sold it for small losses.

Later on, I saw the resiliency in $S and it acted like it wanted to go up all day even though the market was negative.  Seeing that it was near the breakout point to the upside from a long long period of cup and handle pattern, I felt this one was a good bet from here.  Usually, when price break out from a long period of consolidation, it can run for quite awhile after breaking out.  Let’s see if this one will follow this pattern.  Oh yeah, I bought some $S in the morning and added more later in the day.

$POT was doing great all day and price was holding steady with a gain; so I left it alone.

Oh yeah, because I was occupied with $DCTH, I totally missed the $AAPL short-trade.

END_OF_DOCUMENT_TOKEN_TO_BE_REPLACED

Despite a negative $SPY all day, $S acting like a hyperactive child wanting to go out to play.

Take a look at the hourly chart below: 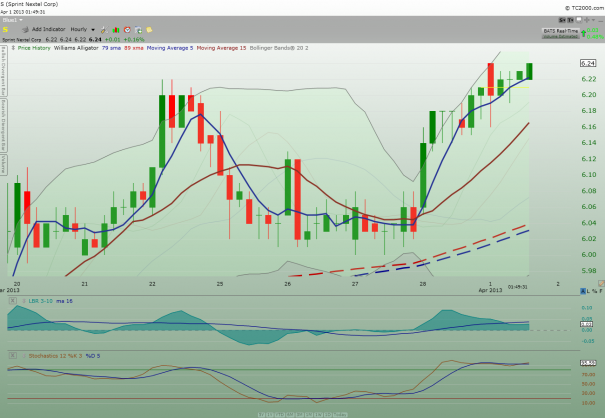 It is still showing a positive uptrend and no sign of even a minor correction. 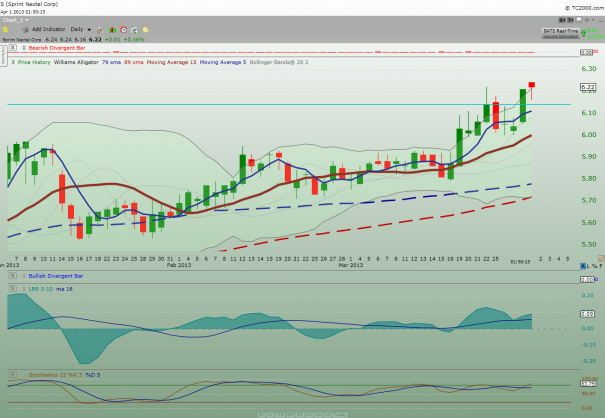 Needless to day, I added more to what I bought in the morning.

END_OF_DOCUMENT_TOKEN_TO_BE_REPLACED

$DCTH holding steady as it goes…

$DCTH has me going back and forth in the morning but I eventually stay the course albeit holding only 67% of original position.  Not to be too greedy, I lightening up due to the volatility this morning.

If you look at the 15m chart and the daily chart below, it does look like $DCTH is getting ready for the next leg up.

I may add more if price action takes out intra-day high today. 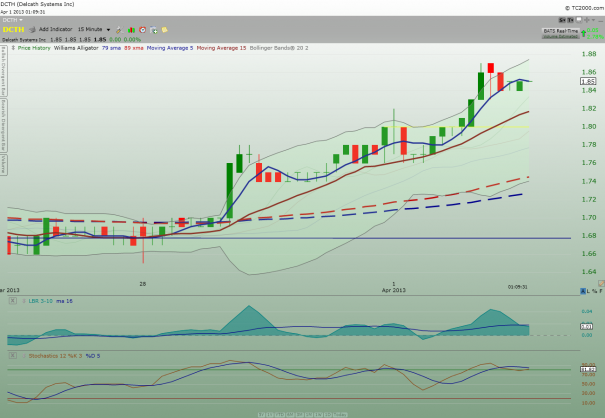 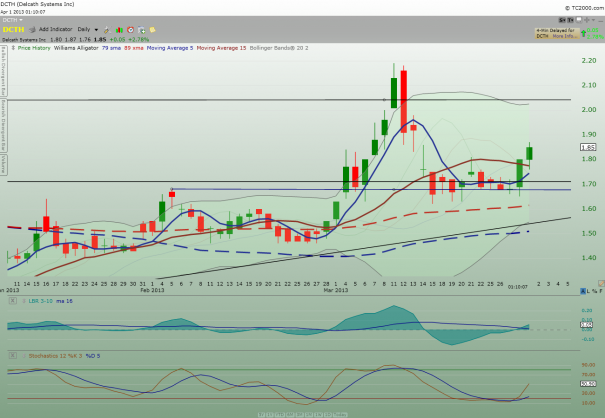 Notice that price action stays on top of the 5 & 15 moving average lines which to me is bullish.