I got stopped out earlier in the morning during the downdraft but re-entered my position on $AAPL after the dust was settled; therefore I’m still long $AAPL.  If the Morning Star bullish pattern continues to hold until day close, we “may” find the bottom on $AAPL.

Take a look at the Morning Star pattern (inside the circle). 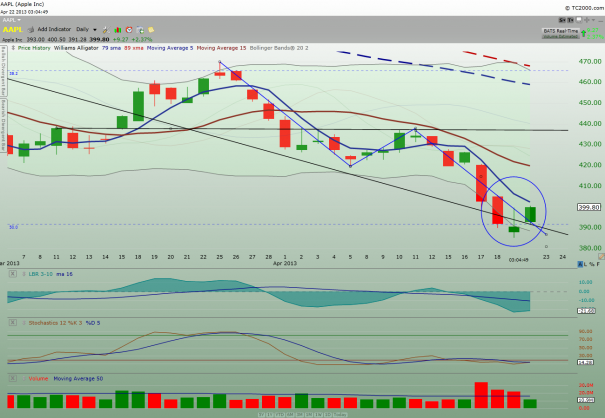 Of course, $AAPL earning report after close tomorrow will be the deciding point of $AAPL’s future direction.

Below is the primer on Morning Star Candlestick pattern:

After declining from above 180 to below 120, Broadcom (BRCM)

formed a morning doji star and subsequently advanced above 160 in the next three days. These are strong reversal patterns and do not require further bullish confirmation, beyond the long white candlestick on the third day. After the advance above 160, a two-week pullback followed and the stock formed a piecing pattern (red arrow) that was confirmed with a large gap up.