A market that does the opposite of what it is supposed to do should is telling you something. Our current market has almost over-extended itself into abnormality. Let’s look at what happens with SPY when it extends itself above the upper Bollinger Band.

Traders must develop abnormal market filters. These filters can be used to denote markets that are abnormally bullish or bearish and will help traders know when trends may extend themselves for longer than normal without a significant correction or pullback. My favorite go-to abnormally bullish market filter is the upper Bollinger Band, set to a 50 day period and 2 standard deviations (50,2).

SPY has closed just 12 pennies beneath the upper Bollinger Band. Although the close is technically beneath the band, one shouldn’t take a completely binary approach to determining an abnormal market. In this case, like hand grenades, close enough counts. Bears who are looking for a swift and sure pullback for this over-extended market may end up waiting longer than they can bear.

Buy SPY at the Close if 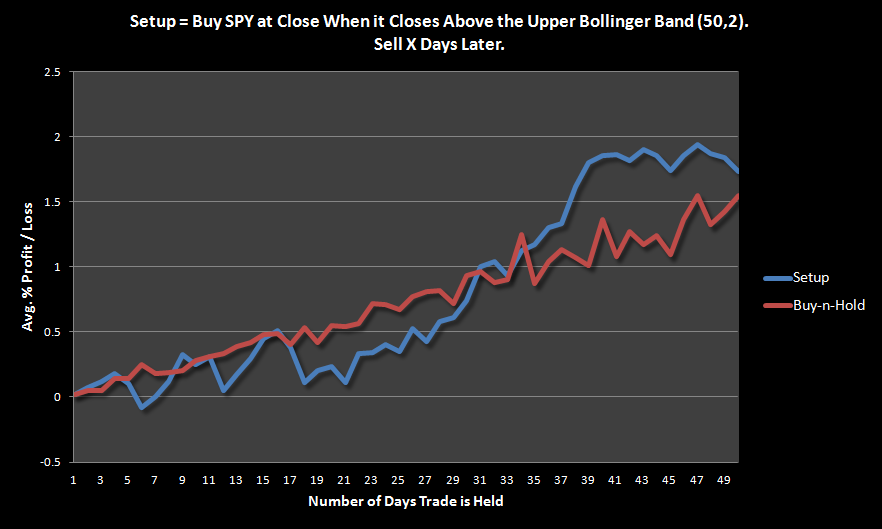 Results over the first 30 trading days tend to under-perform.

The under-performance or consolidation (compared to buy-n-hold) that is typical after a close above the upper Bollinger Band probably lulls bears into a false sense of security. Rather than putting in a large pullback, SPY has tended to shoot higher.

There are enough samples of this setup for the results to be generalizable.

The above chart illustrates the tendency of SPY to ride up and slide down the upper and lower Bollinger Bands.