When we got back from our second tour to Iraq, they started giving us all brain scans. We went down, one platoon each day, to get our scans. This fat slob was operating the machine, stomach looking to burst his camouflage scrubs, he and I were the same rank, but he was truly “An Army of One.” Apparently I had/have an above average skull thickness, which made this fat slob chuckle, and for at least a week I was “PFC Bonehead,” “Hooah Head,” “Battering Ram,” and many other creative monikers.

Besides having my brain squeezed by a mass of protein and calcium, I am actually able to operate as a productive member of society, except for when I’m beat to death from being tired and working out so hard. Last night I forgot to link to the screen I made in this post (now fixed). Then after falling asleep on the couch waiting for Europe to open– it’s a ritual, so shush –I awoke to see VIX futures ripping, to the tune of 4%. This is my “late night tell” as to what happens in the market the next day. Instead of making the title of the post detailing that I though we would trade down, I wrote “We Trade Up In The Morning,” where “Up,” should have been “Down.”

Ignoring the fact that I am actually quite “dense,” I have been making some pretty good picks, and I am much better at shorts than longs. I made this new screen– which members of The PPT can see here –the same screen that picked these winners from my post last night. Take a look at their charts, and I’ll be honest, I think there are a few names in there that will see at least 20% downside in the coming weeks: 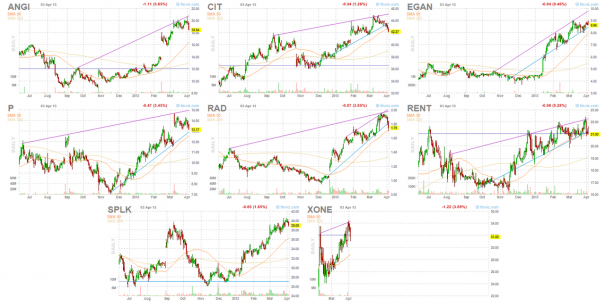 And yes, I’ve seen TSLA today, and no, I’m not selling. While everyone runs to squeeze through the slats, I remain in the muddy corral, with the beast rearing up, steam billowing from its nostrils. I will not be denied, I shall– in fact –tame the beast.

4 Responses to “This “Bonehead,” Can In Fact, Make You Money”

We Trade Down In The Morning
0 comments

Do You Have Tags for "Short Season?"
0 comments