Make sure to read the previous posts in this series, starting from the bottom, here.

This is probably going to be the lamest post in the series. Almost no one can recall everything that happened in Al Rumaitha, and it isn’t mentioned in any of the books or articles, because it was just our company, and some mechanized folks shot at each other, which was the highlight in the news. Basically, from what I can remember, after we had taken care of As Samawah, the 101st, and our brigade, were getting ready to continue the push through the “Karbala Gap,” so that 3rd ID could continue toward Baghdad.

If you want a bland and scholarly– but awesome –report on the events, read this. After stomping everything that came our way in As Samawah, we were without a mission and purpose, as 3 ID and 1st Marine Division reequipped to make the assault on Baghdad. The order came down– without warning, of course –that our company would be securing an entrance/exit to the city of Al Rumaitha. Please note, I thought it was “Ar Rumaitha,” but it seems it’s “Al Rumaitha.” Sorry that I don’t know, but it was just another mission.

My platoon was in the lead, for the first time since the train station assault, and 3rd Squad was the assault squad for the first time, (they were seen as the weakest squad). Our objective was a Ba’ath Party headquarters on the outskirts of town, and the adjacent Iraqi Army barracks. My squad was in a support by fire with Weapons Squad, I was actually glad for this, as I was slated to be the second guy into the basement in the “Hospital Mission.” Which, based on “intel,” seemed to be a suicide mission.

We trucked up to the town from the train station, then offloaded and walked the rest of the way. Once we reached the battle line, we all got into formation and hit the headquarters, in full-on assault mode. My squad assaulted forward and setup the initial support by fire, with local, and long security. Weapons Squad joined us soon after, and setup their two M240B machine guns, with intersecting fields of fire on the objective. It is the absolute dark of night, mind you. This all literally took seconds.

3rd squad bombed out to our flank, between us and the Bradley’s we had covering us. Company 60 mm mortars were setup and ready to fire, so were the platoon’s guns, and Javelin anti-tank missiles. With 3rd Squad approaching their assault point, I saw 1st Squad move out through the green glow of my NODS, off to my left. 3rd Squad, confirming the move, sent one team up to the building, gaining local security over the windows and doors. The squad leader and the other team moved up, they then entered and cleared. 1st squad moved up to the “breach point” and followed into the “foothold.”

There was a problem, the first team didn’t look around back to see if their wasn’t another entry point, as they were so focused on the front door. 3rd and 1st Squads entered  and cleared the main headquarters office, a small concrete and mud structure, without contact. This gave 3rd Platoon the go ahead to come on down and assault the army barracks.

The story goes, that as 3rd Platoon approached the back side of the building we had just assaulted, their last covered position, they noticed the door,– locked with a padlock from the outside –but figured it had been cleared from the inside. It had not. Their platoon went and took the barracks, without any contact either. The so called “elite,” and “most loyal to the regime,” had literally laid down their weapons, still loaded, and ran away. I guess they heard the “Eighty Deuce” was in town? They literally had two recoilless rifles, loaded and aimed, but just left them like that, even though they could have taken at least three of us with them.

There was a school next door– which would become a common theme –with school buses parked. Somehow– and/or some reason –one of the trucks caught on fire. 3rd Platoon blamed it on the locals, but I still think it was them. They were kind of brigands, and I don’t really know how the locked room went down, but it got cleared the next day, and i’m pretty sure 3rd Platoon was involved in the clearance. Apparently there were mortar rounds and whiskey bottles in the locked room, there were also whiskey bottles in some cars we cleared at the TCP (Traffic Control Point).

Our mission at the time, that we had setup, was to sleep in the headquarters and army barracks, then run TCPs on the road outside– which led in and out of the city, blocking attacks on the supply line. We had “Concertina Wire” setup all across the road, that we would pull back to let people through. I was very serious about my job that day, as we had already found a small two door Mazda truck with RPGs hidden in the back cushion. Not to mention, all the goats, chickens, and people wedged in all manner of places. 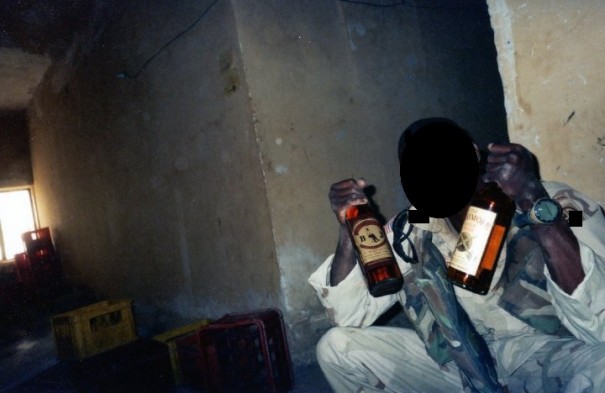 I wasn’t interested in drinking, many were though, and I will never know why. I love to drink beer these days, but as an 18-year-old, all I wanted to do was fight. Some people in my squad got “‘hold of some of the whiskey,” and drank it, before we had out nighttime guard out at the TCP. I was pissed about this, but ended up being just hyper vigilant on duty, while four of the nine squad-mates snored, leaned up against the curb, smelling of whiskey.

This sounds bad enough, and I was rather upset, but then I found out upper-level NCOs from another platoon were involved in the whiskey, and it made me sick, or so I thought. A few people had been getting sick– dysentery, salmonella, and the like –just from being around the water, dead bodies, and such. As I was sitting there being pissed off about the whiskey situation, and not having an active mission in the fight, I had some downtime to write home, and get some sleep.

As I was writing home, the OPORD (Operation Order), came down. After having some “K-rats” and MRE’s, I was ready to get out of this mud-hole, and get away from the whiskey, as it would not be able to come with us on the trucks, with a packing list. We were to ‘air assault” right behind a couple of battalions from the 101st, my brother’s unit would be flying us, perfect right?

I woke up that morning, and ate one of the non-frosted pop tarts from an MRE, then proceeded to vomit violently. The sickness had gotten to me, wasn’t this a bitch? The one mission that I would be able to do with my brother, I was scratched from the assault. I rode up on a truck, delirious and full of muscle relaxers for my stomach, with Battalion HHC (headquarters), and the other sick and wounded. We were headed to Karbala, one of the holiest cities in Iraq, which had the 101st and 82nd Airborne headed its way. 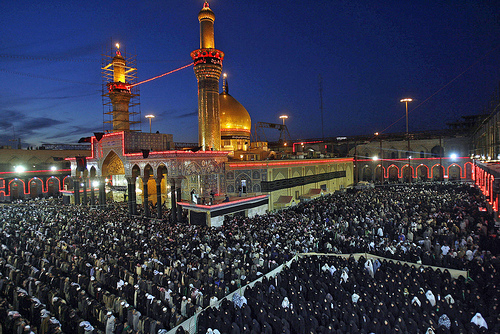 3 Responses to “The Invasion, Part 5”

Searching My Pockets For Change
2 comments

A Few To Watch
2 comments