I prefer not to tell most people that I have served. You see lots of dudes out there that advertise it, shirts, hats, bold tattoos – that’s not my style. I have a couple pieces of “body art” that give it away, but just like most of what I do and say, you wouldn’t know, if you didn’t know the true meaning. I don’t judge anybody that didn’t serve in the military, it’s not for everyone. It literally takes someone who seeks out pain, discomfort, fatigue, and hunger, then gives them all both fingers, while laughing at them.

The thing that really gets to me is when someone tries to say something along the lines of “man, I was going to join but, wah, wah, wah.” Dude, frankly, whatever our reason was, was your reason, please do not try to identify with me, your guilt– or whatever it is –is frankly sad, and offends me. We all find our places in life, and make the decisions we make. I completely respect all those members of the military that serve in a non-combat arms fields. But, do not ever come up to me and say, “[they] did the Infantry’s job,” that one time they got hit by an IED and had to dismount from their trucks and pull security.

Let me tell you the definition of the infantry’s job:

The Infantry closes with the enemy by means of fire and maneuver in order to destroy or capture him or to repel his assault by fire, close combat, and counterattack.”{FM7-8, Infantry Rifle Platoon And Squad}

So, did they seek out the enemy or did the enemy seek them out? I’m confused here. There’s a reason why there was a CIB (Combat Infantryman Badge), decades before this stupid new CAB (you’re not getting that acronym from me). I was all for the CAB when it was first announced, only going to combat arms troops, but now some gas pumper can be sitting on their cot playing XBOX when a mortar hits 300 meters away, and they get a CAB.

I supported the combat arms folks getting their own award for combat actions, because those Engineers and Forward Observers– in my case –were there, in that cow-shit filled drainage ditch, on that farm land, on the outskirts of As Samawah, when incoming and outgoing indirect fire (mortars and artillery) started playing badminton, and all hell broke lose. 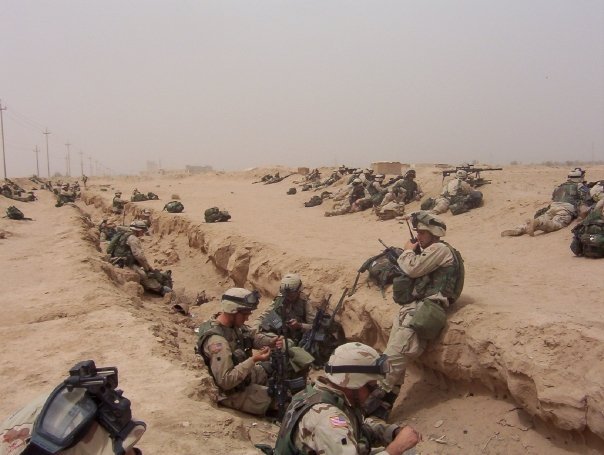 3rd Platoon in their “Blocking Position” on Our Flank

Where were the gas pumpers and supply guys then? Pulling security in the rear? Maybe. Reading a magazine, playing dominoes on an MRE box, or listening to the BBC on a crank radio? Probably.  Unless they re-classed they never were, nor ever will be, in the Infantry. Just like I was never an Engineer. Some 88M (truck driver) saying that they were “doing the infantry’s job” because they were in one ambush, is akin to me saying “I know what it’s like to be a submariner,” because I was on one, once.

Unless you have tried to crawl up into the smallest ball you can, and crawl into your helmet, you have no idea what it’s like to be underneath indirect fire. I talk to my team leader– from that time –a few times a year, every time, he brings up the fact that my eyes got so wide he couldn’t believe it, then I asked “is that ours, or theirs?,” “both,” “fuck…” You can’t see it, it just whistles overhead, invisible trains of death. Then, one lands near you, and doesn’t go off, it just sits there, stuck in the silt, and smokes, while you poke one eye out of your helmet, trying to catch your breath.

I wanted to either dig a hole back to the comfort of my childhood home, or move, immediately. I’m not a fan of standing there while someone else throws punches at my face. We got the order, with the order of movement: 1st, 2nd, Weapons, then 3rd. Our objective was a house in the middle of the dusty silt farmland. Now that it was light, we longer owned the night, and the enemy could see us just as good– if not better –than we could see them. There were a few idiot enemy, here and there, that had somehow stayed hunkered down through the night in ditches in the distance, they were quickly dispatched by 2nd Platoon in their support by fire, the D Co gun trucks, and anyone who got a clear shot.

After we got a foothold in the building and cleared the bottom floor, we called up Weapons, snipers from Scouts, and 3rd squad. We set this up as our platoon HQ, with the mission to stop any vehicles from coming out of the city. The enemy was launching attacks from within the city, to the 3rd ID supply lines on the main supply route outside of the city. Plenty of warnings were given: fliers, loudspeakers, radio broadcasts, etc. All you needed was a white flag to pass safely.

These idiots were using ambulances as a ruse, they either housed high level officers/officials loyal to the regime, or something to do harm to coalition forces, without white flags, idiots. Poor choice, we are talking about the 82nd Airborne here, a bunch of middle class kids ready to kill anybody they can. It was like a turkey shoot, they would try to launch a vehicle from one of the exit points to the city, but we had complete and total control of sectors of fire. Trying to distract us, they would try to have some of their infantry assault from another direction, everywhere was covered though.

We had artillery, mortars, helicopters, bombers, and fighter support. As soon as they tried to do anything, we flattened them. I shot almost all of my 40mm M203 grenades that day, and almost all of my magazines. The SAW gunner in my team– that would later become my team leader–killed at least five enemy with precision shooting from his SAW. Sergeant “Herne,'” shot a dude with the 50 cal sniper rifle from over 2000 meters, aiming feet above his head. We killed hundreds– if not thousands –of Fedayeen, Republican Guard, and other “irregulars,” that day. 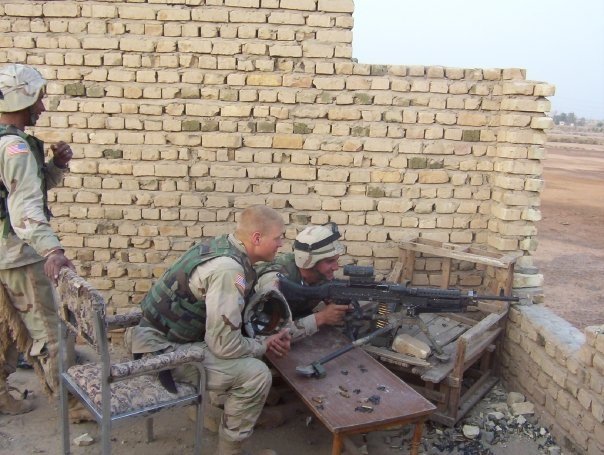 A Sniper, a Team Leader, and “The LT,” After Killing Multiple Enemy [Note expended rounds on the ground, and sniper’s pants]

We were all pumped, no one had even come close to being hurt, but we came close to getting killed by those mortars. We ran patrols, and LP/OPs (Listening Posts/ Observation Posts), without taking much contact form the enemy. My company took ZERO casualties, while we killed so many enemy. It was a good feeling. Judge me all you will from behind your computer screen, but when was the last time you faced men trying to kill you?

After completely destroying the enemy, and getting relieved by a “Mech Unit,” we walked back toward the train station and setup a “patrol base” for the night. I had not really slept in days, neither had my squad mates, so as 3/4’s of a team huddled together to sleep, wrapped only in their “woobies” (poncho liners), one member pulled security at all times, 30%. Only A Co took contact that night from some idiots, and they absolutely drove the enemy, and their assault, into the ground.

In the morning– instead of heading back to the “Train Station” –we got a mission to attack a hospital, that seemed just like the jump into Baghdad, suicide. The local Republican Guard General and Colonel were supposedly holed up in the hospital, with sick patients, and live oxygen lines running through the walls. [Read: hand grenades running through the walls]. This mission– just like the jump previously –got scratched, I was going to be the second person into the basement/first floor, after the engineers breached. I would have more than likely have been killed. 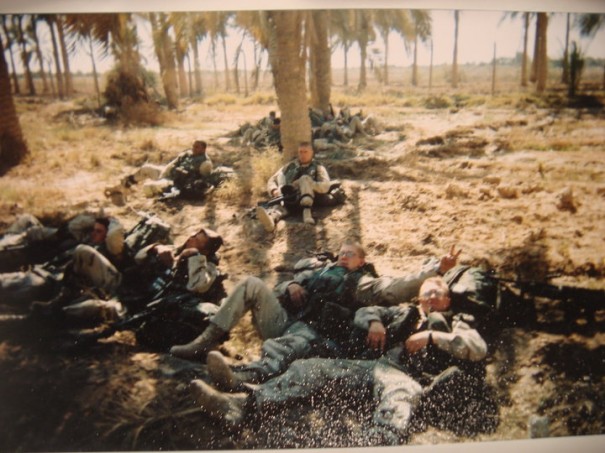 The Engineers in our Patrol Base, Not Happy About Having to Brave Possible Fire to Breach For Us [Engineers have a hard job]

In the morning we were trucked back to the train station. After a quick meal of “K Rat’s,” we reloaded, cleaned our weapons, packed our gear, and got ready to assault the Ba’ath Party Headquarters in the Saddam loyal town of Ar Rumaitha. This was a weird town and mission.

This, coming up in “Part Four.” [Click on the image to see the locations of the above mentioned cities] 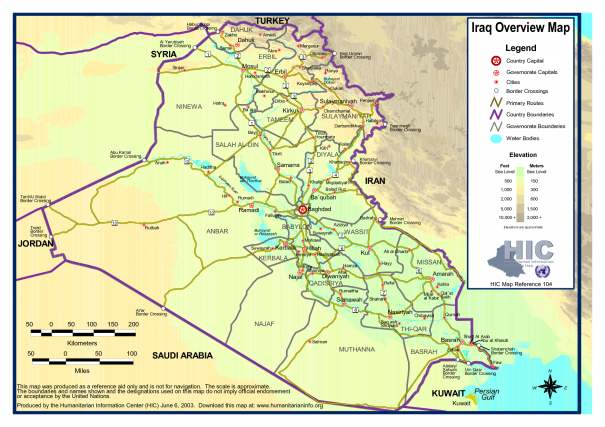 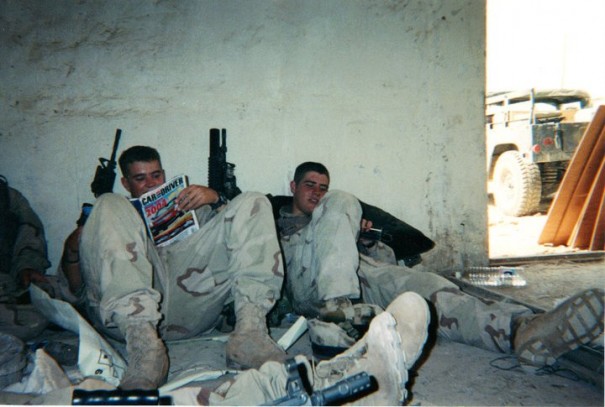 8 Responses to “The Invasion, Part Four”

Here's to You Chosen Folks
2 comments

"The Year of The Rhino" Continues Onward
6 comments