I was raised Catholic, dragged to 10 am mass every Sunday. This made me grow to really despise religion, as I have always hated authority. There are things about the Universe, and the psychics that it has ordained, that we will never be able to comprehend within our feeble minds. Thus, there is a certain bit of luck involved in things, I try to use math for everything, but there is always the ever changing independent variable. The input that determines the outcome, but is   often unpredictable, and unprecedented.

You will often hear me on here and on Twitter mention “Odin” or “Thor,” that’s just because I relate my improbable luck, and good fortunes, to outside forces that I cannot understand. Luck is a funny thing, in that it seems to sometimes know more than you. You think you want to put yourself in a high risk situation, but Luck knows the real odds.

I have horrible ADD/ADHD, that I have always had, but my parents chose to ignore. Maybe it is a farce, and I just needed to run around the block a few more times? I was a pretty active kid though, and still murder my muscles (no homo) in the gym, yet have trouble focusing. This causes my thought processes to bounce around like Silly Putty in the International Space Station. My thought processes and future plans have been know to change from minute -to-minute, except in one case.

One of the first things I could do when I could walk/talk, was to pick up a twig and act as if it was a gun. From the time I had any idea what the future was, I wanted to be a soldier, that served in combat. I’m fairly certain Thor and Odin were looking down and smiling at me from the beginning, because what led to me to war, was nothing short of some Hollywood movie script.

I grew up in the “Orange County of the North,” Marin County, CA. I think the exit to my parent’s house was exactly the tenth exit, after getting off the Golden Gate Bridge. Marin is like Orange County in the wealth and caddishness departments, without the Republican values, thus you end up with a bunch of burnouts that don’t want to work hard, and just want to suckle off of mommy and daddy.

I never fit in there. I hate conformity, but I also hate heartless pussies, so I was stuck in some purgatory. I was into Punk Rock and Rockabilly, with a huge pompadour, Mohawk, or shaved head; yet I liked playing rugby, lifting weights, jumping BMX bikes off of roofs, and fighting; win or lose. After talking to my brother, Col Fleischer, Gen Stone, and other friends and family that were active duty Army and Marines, I decided that joining the Army provided me with the best opportunity to fulfill my goals.

I originally wanted to be a Naval/Marine Aviator– read “fighter pilot,” then I wanted to be a Navy Seal– but hated deep/dark water, then I wanted to be a Marine Infantryman– but becoming an infantryman wasn’t guaranteed, and there was no assurance of immediate deployment. Thus, I chose the Army as my choice, with the full idea that I was going to get a “RIP contract,” and go to a Ranger Battalion and go kill the enemy. Unfortunately, when I was at this place called MEPS– where they do physicals, written tests, and background checks on you –they ran my background check, and they discovered that I had already been charged with an assault, and thus, could not obtain the security clearance to get a “Ranger/RIP Contract.”

I was devastated  and my recruiter assured me that I could get an “Airborne Contract,” then go to “RIP” or “ROP,” after I got through the time needed to obtain the appropriate level of clearance. (These are now known as RASP1 and RASP2). I wanted this so bad, it was the only thing I ever wanted to do; I knew it was my destiny. In the middle of all of this, some terrorist assholes decided to fly some commercial airliners into American buildings. This pissed me off even more. So I signed a four year contract sending me to Fort Bragg, NC, as an infantryman in the 82nd Airborne Division. 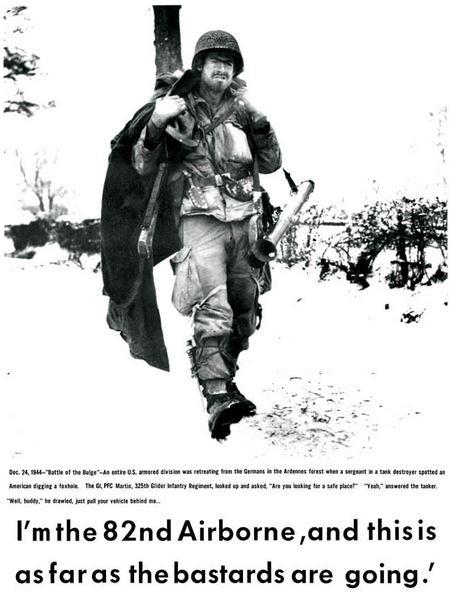 Coming up next in part two: Training at Champion, Failaka Island, and the Udairi Range Complex, then running from “Scud Missiles.”

8 Responses to “The Invasion, Part One.”