Yet the sellers can’t gain traction.  Every attempt at sending price lower to fill the gap below stalls out.  The sell orders are pressuring the bid this afternoon in the S&P minis but not achieving any progress.  All of this pressure building up has to go somewhere.

Meanwhile, with the help of The PPT I found some shorts in ENPH and squeezed’em pretty well today.  I scaled some profits, but left ½ the position on in case the pain trade continues.  The weekly chart suggests it could.

I hopped on board Zillow today after the impressive Pending Home Sales Index, which crushed expectations.  I hate when a house goes pending, BTW.  When I was about 9 months into my hunt and houses would go pending in less than 3 days listed, I would chastise my real estate agent and damn the illiquidity of homes.  This chart looks mint and I want it to keep looking mint so I can size it up.  For now, I’m ½ size.

These F shares are working out, up around 4 percent since my entry.  So far, we’re looking at a v-shape bounce in a big consumer discretionary.  The same goes for TPX.  This is like the housing trifecta: Z, F, TPX.  You find the house, you buy the car, you buy the bed.

We’ve been trend up all week, which SHOMP-wise makes sense, but for all other intents and purposes seems odd.  Now the questions becomes, do we run into the 4th of July?  If we do, I want to be in patriotic names, like F.

I’m still in FB, did you know that?  I’ve ridden through the trough, and now things are looking really good.  This also fits the suburban lifestyle, shack up and talk politics with your delusional relatives.  Note: I don’t do FB.

END_OF_DOCUMENT_TOKEN_TO_BE_REPLACED

The Gains Are Hard Fought

The tape we’re navigating continues to be tough on me, hesitating to grant me generous sums of money.  I came into the day a little over 60 percent long, as where I was more like 80 percent long on the way down, so I’m not recapturing my losses.

Plus I own some overpriced AAPL.  I’m afraid this stock lost its momentum a few weeks ago and is now destined to drift lower until a catalyst presents itself.  And here I am, -6% on the name.  I suspect we’re seeing profit taking by the huge funds who have called AAPL home for many years.  After a lousy quarter, who wants this name on their books?

My only action today in the portfolio was taking a ½ scale on my ZION shares.  Regional banks continued their strength today and we reached my initial destination.

I’m sick of solar stocks and I own YGE and ENPH.  I thought about selling both no less than three times today but I wanted to give them a chance to regain their mojo.  Perhaps they would think about how cool it used to be when they would run hard.  I don’t know.  Put yourself in a business owners shoes for a moment.  Would you rather build gigantic solar panels on your roof to generate a fraction of the energy you need, or cut your lighting expense by 75 percent?  Lighting which in most business settings accounts for 25 percent of the electric usage.  If I’ve said it once, I’ve said it a thousand times, “The easiest was for a business owner to place themselves in the graces of Premier Obama is to upgrade their lighting to CREE bulbs.”  CREE should have been accumulated on the dip…that’s your hindsight trading tip of the week.

I wanted to add to SODA all day and then I didn’t.  It just never convinced me.

Today was one of those sessions in the futures where I grind out all day long to compensate for two mistakes I made.  Then, sitting on a beige-green day, fairly confident the HOD was in, I got cocky and went long again and gave back my daily gains.  I made 1500 in profitable trades and 1650 in losing trades.  The lessons keep coming.

I’m off to tend to other business then swim no less than a mile.

END_OF_DOCUMENT_TOKEN_TO_BE_REPLACED

The S&P is trying really hard to form a tradable range here.  Talking ETF SPY, the brackets would be 158.50 – 165.50 give or take.  The mouth pieces are trying their best to help, coming out of their smoky offices and jawboning in the middle of a quad witching.  PPT wants a range low too.  Everything is pointing to a range low—except SHIBOR rates and suspender-wearing bond traders.

In the spirit of our gaptastic, have fun sleeping, stock market, we need some ridiculous headline out of Asia over the weekend that wastes no time, gaps us above the midpoint of our range, catches everyone out of position, and forces your hand to buy at a higher risk.

It would be fitting given the recent nature of this choppy courrrection.

So I’m keeping position sizes smaller, cash higher than I would like to, and limiting the number of positions I hold.

I took a SODA long this morning.  It’s looking really good.  It’s only half size.  If it goes lower, I’ll double down.  If it gets to $74 I’ll scale ¼ off and let the market pay me.

I’m a proud bag holder of $423 dollar AAPL shares.  I bought them in the middle of the FED announcement yesterday.  I was completely swept up in the hype.  $420 is an important price level for AAPL because the degenerates who trade it think Phish plays good music.  Maybe they should stick to Chief Keef.

I’ve decided to stick with TPX through this indecision.  I hold a ½ position here also.  I want to make it 2x I love these beds, especially as the adjustable bed market continues to boom.

Holy Mt. ZION is trading well as are many other regional banks.  Holding.

It’s finally summer hallelujah.  We shouldn’t even be holed up on our computers but there are moves to be made.  Get your pasty ass outside and don’t forget the sunscreen.

END_OF_DOCUMENT_TOKEN_TO_BE_REPLACED

The Market Is Correcting Me So Hard

My swing portfolio wrapped up methodically giving back all second quarter profits today.  I don’t know how closely you follow along, watching Raul get crazy on the tape, but when I stand outside the fish bowl and see myself the sight is horrific.

But I replay every trade I take.  I take notes, I brood.  I make plans to take over the world.

All this I say like some kind of awkward apology if you’ve hitchhiked onto any of the MANY losing trades I’ve taken recently.  I’ve been ADD trading, buying every tip, rip, and slip in the market.

The overarching theme to my losers is bad entries.  High risk entries to be more precise.  It fucks with your confidence when it takes a 12 percent move to deem you “wrong”.  At least it messes with mine.  I compensate with smaller position sizes, but then I have 15 small positions clown raping me simultaneously and shit gets out of whack.  Pardon all my swearing, I’ve lost mucho dinero (no Robert).

It’s been one stop out after another, if you read me on the twitter network you’ve seen them peppered out over my timeline.  Brutal.

But now is not the time to sit in an inflatable pool of pity.  As a matter of fact, it’s never time for pity friend.  It’s time to pick yourself back up and be more powerful, more dangerous, MORE STUPENDOUS THEN EVER.

I started already by absolutely annihilating the liquidation break.  Red arrows are my short entries, blue my covers.  Look at this: 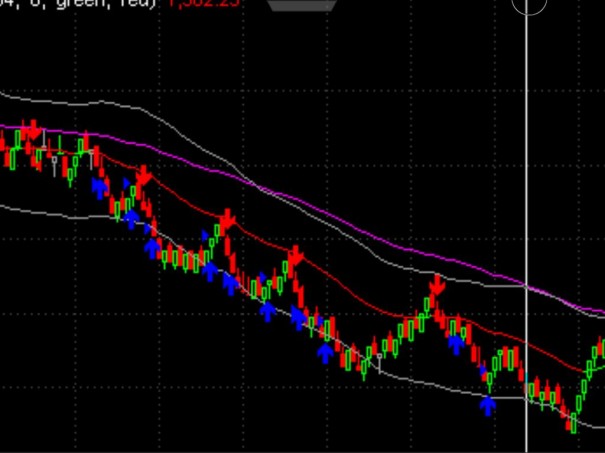 That’s the best god damned string of trades I’ve ever taken.  I should only trade during this madness because the rest of the time you’re cold sweating and grinding out 300 bucks. It’s disheartening to say the least.  To say the most it’s questioning every decision in your life that’s led you to trade futures.

The above string of trades is why I trade.  I crushed.  It felt amazing.  That’s my planned trade.  It cleared my mind, like making sweet love.  I made sweet love to the tape all over the place.   Anyhow…

If we’re entering range trading like I suggested last night, then we should be at or near the bracket lows.  Thus a mean revision should go down, taking us back into the 33 and 9 EMA.  That trade should earn some coin.  That’s why I bought ZION into the bell.  Banks make money with higher interest rates and ZION had some fantastic proprietary PPT stats going on.  So I took the trade.  Look at this entry, too.  It’s low risk, down to about 26.75 and relative strength to boot, not bad.

Tomorrow brings anything, being a quad witching and all, but we have the technology, the money can be rebuilt.

You would likely perfer the NSFW version of the following video, go find it: