I’m watching these rusty shorts fail time and time again to break 1666 on the spooz in the most non-eventful trading session of the week and it got me adding long exposure.

These purchases were financed by sales of BPZ early on at 2.33 which was a pretty fancy fill and sales of Z at 64.14 which is only decent.  I still own pieces of both.

I would have loved to play some Friday lotto too, but my piker Think or Swim account got the 90 day ban hammer lol.  I totally forgot about that pattern day trader rule, but I like to segregate my pure degenerate money to ToS, my swing money to Fidelity, and my futures money to Mirus.

No trades in the futures.  If I don’t trade all willy-nilly, I get to smoke a stogie this afternoon.  No setups have triggered today.

END_OF_DOCUMENT_TOKEN_TO_BE_REPLACED

I certainly hope I’m not beating a dead horse, buying more solar longs into the close.  If I had a time machine that could give me 30 minutes back, I would have bought either GS, XONE, or CHCI.

But instead I bought a trashy little stock that goes by the handle of HSOL.  May it burn my enemies like ants under a magnifying glass.

Fly favorite (and quickly climbing my ranks) IMMR asserted a nice comeback today and has the look I like.

There was some straight up voodoo going down behind The PPT pay wall today that had members laser focused on higher equity prices.  It scared me a little, I’m not going to lie.  It was like walking in on a séance while the devil plays a fiddle made of gold.

RGLD caught a strong bid on Hilsenrath mouthing off.

Watch what goes down tonight as the sun settles and biblical storms impress upon the east coast.  The birth is happening.  Tomorrow is my birthday and with it comes great power for Raul.  Galactic alignments, hail storms, and ABENOMICS!

I must be off, for many preparations must be made before sunrise.

END_OF_DOCUMENT_TOKEN_TO_BE_REPLACED

We Caught Them Leaning Short

I’m feeling a little in the zone today so you must pardon my absence.  I’ve been crushing this S&P tape since 11pm last night.  Shorting, longing, more longing, and now I’m finally flat and in awe.

I made good monies today.

As I turn a more focused eye to these stocks the first thing striking me as odd is the lack of tenacious demand for solars.  It’s like the god damned secondary over at FSLR put a wet blanket on the whole industry.  Everyone’s still tending to their sunburns with coconut and aloe.  But I must let you know, Raul never burns, I only get darker.  And when I get really dark, things get weird.  By that I mean YGE needs to get moving NOW!

HMIN will cut dicks once it finally crushes this stupid 30 level.

DDD is still blowing minds around the world, building shit out of polymers and what have you.  Believe it or not, this company is still special even if Japan unwinds their monetary policy.

China isn’t getting awesome yet.  They will be.  Never sleep on the Chinese.

TPX is behaving excellent.  I think you have to keep the weekly chart in mind if we see follow through tomorrow.  That would carry some major implications.  Watch me crush this trade.

YY is going red to green but will always have a red soul and desire to kill shorts.

IMMR yes they have the haptics.

I bought more ODP because something about office supply stores gets me excited.

END_OF_DOCUMENT_TOKEN_TO_BE_REPLACED 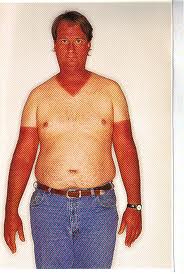 I was caught out of position today in FSLR and as a result was stopped out for a single day 6 percent loss.  Listen closely, it happens.  The way I chase momentum, about 1 in 10 trades does this to me.

If you recall, I bought two solar names yesterday, YGE being the other name.  Interestingly enough, this position is sized the same as FSLR.  But pull up the two charts and you might be able to see why one stopped out and the other didn’t.   I’m not saying YGE is a sure winner here, the trade is still in question, but it is/was a better bet than FSLR yesterday at 3 pm.

CREE burned me too when it melted its heat sinks and lit the ceilings on fire here in la casa de Raul.  I will go to hell and back with this name though, extra devil.

Every other part of my book sucked less, which is good.  YY is at an important junction.  This junket may have already reached its destination as they say, but I would be remiss if I cut it after one day of selling.

My largest position performed admirably.  Well done HMIN, may your holding out for better days be met with strong accumulation.  I’m talking to stocks again…I need to bring this up next time I see my therapist.

I closed out the day with cash elevated back to 35 percent.

END_OF_DOCUMENT_TOKEN_TO_BE_REPLACED

I’ve been on the long side all morning, both in the futures and the stocks.  Well, I came into the day long stocks and enjoyed a nice 2 percent drawdown on my swings to start the day.

One thing isn’t working at all and that’s solar.  I chased YGE and FSLR yesterday, nearly buying their respective highs, and you see the result today.  Both positions are down over 5 percent and not catching a bid.

Therefore I’m trading everything else that is catching a bid to make up the ground being lost by these solar issuances.  They haven’t told me I’m wrong yet.  Unfortunately, I’ll have to be about 10 percent wrong to know it’s the case.  Such is the life of an overeager speculator.  Position accordingly.

Aside from my bashed on the head by Japanese men wielding solar panels it’s a good day.  We filled a 15 handle gap, a pro gap as they say.  The pros filled the pro gap and did so with the steady hand of accumulation.

My new longs are more YY and some ODP, yes…you know me.

END_OF_DOCUMENT_TOKEN_TO_BE_REPLACED

I’ve come to live by one saying in today’s markets and it’s, “get it while it’s here, boy.”  Because in complete honesty, any spectacular hype surrounding pockets of momentum won’t feel the same next year, week, or even hour.  When a stock is hot, it’s hot.  Higher highs, higher lows, and cocaine dances.  When it’s not, it’s National Bank of Greece.

We are undergoing a slight bounce back after a brutal five percent correction.  Did you blink?  You may have missed it.  As investors peer out of their bunkers, weary from the bombs dropped on their person, they see a strange sight.  It’s Sir Raul, dressed in ceremonial red marching regalia, tap dancing through a mine field.  The sight is so unexpected, so beautiful, they don’t even reach for their gun, they simply watch.

Just as I clear the field and hunker down into a foxhole with many women and Chairman Mao! You come to your senses attempt to clear the field.  You saw the path I took, you see how effortless it was.  You go for it.  Only at that very moment a B-52 bomber blankets the entire field with liquid hot napalm.  You’re dead.  Keep that in mind.

I’m nearly filled to the gullet with high spec, high momentum names.  Names like YGE, FSLR, DDD, YY, LEDS, and more.  I’ll either party all week long with The Chairman, or suffer the very possible drone strike after the NSA hones in on my cell phone whist I order pizza.

It appears the market has gone completely stagnant as I write. Regardless, PRESS THE BOOT!

The only stocks sold were those that will not aggressively appreciate in value.  I cut AAPL and TSLA.

END_OF_DOCUMENT_TOKEN_TO_BE_REPLACED 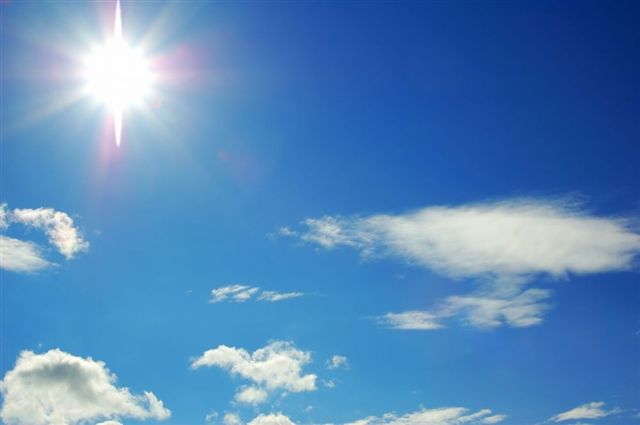 Today the weather in Detroit is a special kind of bleak where it rains all day but it’s too cold to melt the snow.  It is the magic of pure Michigan in February.  I’ve seen February days more dreary then the line outside the 36th District.  Today ranks top three dumpy days.

So what can one do to lift the spirits and remember the sun?  Exactly, bank coin in solar stocks!  The sector is on a tear today.  There’s a whole political theme behind these names, but you’re better off pulling up the price charts for these names and sticking with the biggest winner.

I’m currently long FSLR, and after getting rolled on yesterday, it appears the damage never happened.  It was fake.  Coin can continue to be banked in these names.  Don’t chase anything, as the names are volatile, but keep them on your radar this quarter as the sector is running.  Considering February is traditionally a weak month for the industry, this action suggests an unseasonably strong appetite for solar stocks.

Other names I like: TSL, SOL, JKS, and GTAT (which gets a little LED play too.  Unless LED makers abandon sapphire, which they might)

UPDATE: I stole this FSLR chart from Elizamae’s archives, note the dick guillotine: 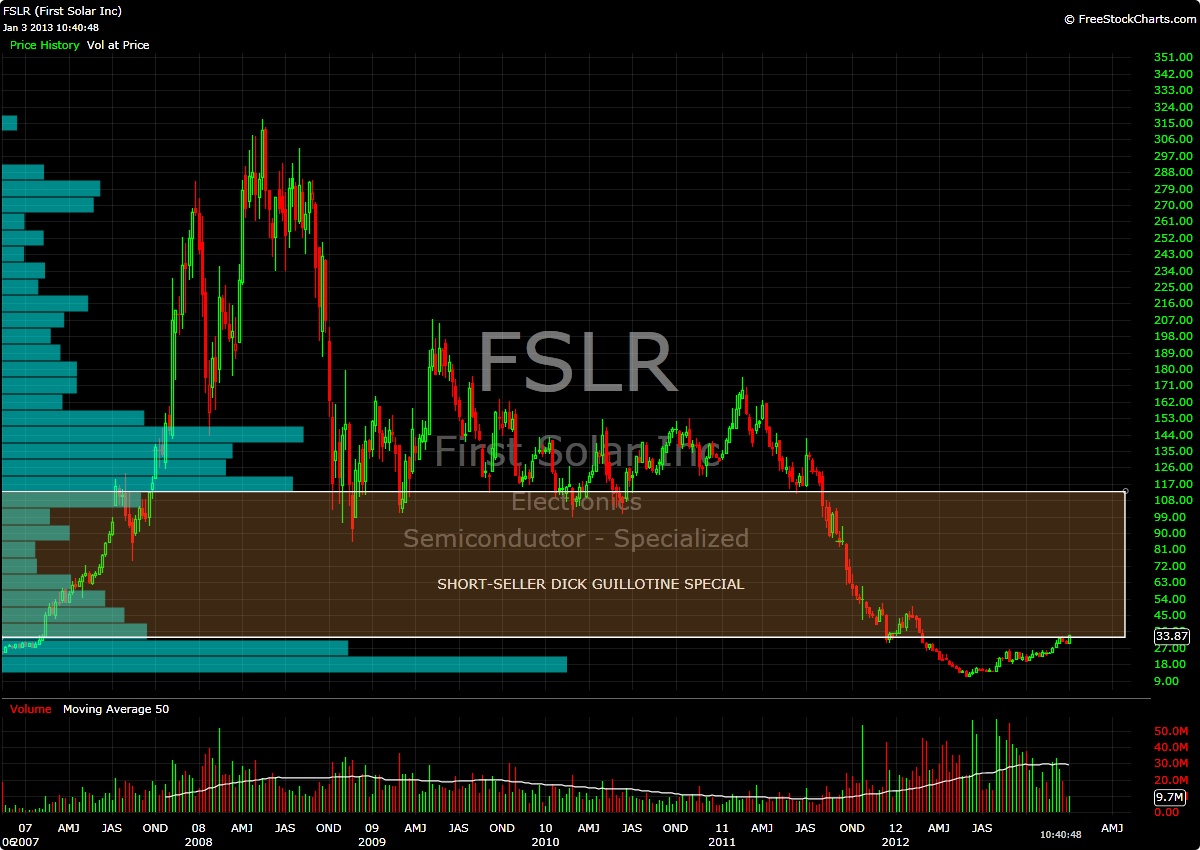