Happy New Year and it’s time to address the important matter of a market with a deal.  I’m currently 40% long, 2.5% short, and cash heavy.  The stance made sense considering the headline risk coming into today’s trade.  Now I must pick spots to add long exposure.

The anatomy of this move could have many participants caught short or downright underexposed.  Pare that with the jostling of many allocations and the environment is ripe for some big moves higher.  I’m using a Keltner channel on the SPY ETF to give me an idea of the range we could see in the intermediate term.  Expecting an open near 144.50 I see room to the upside: 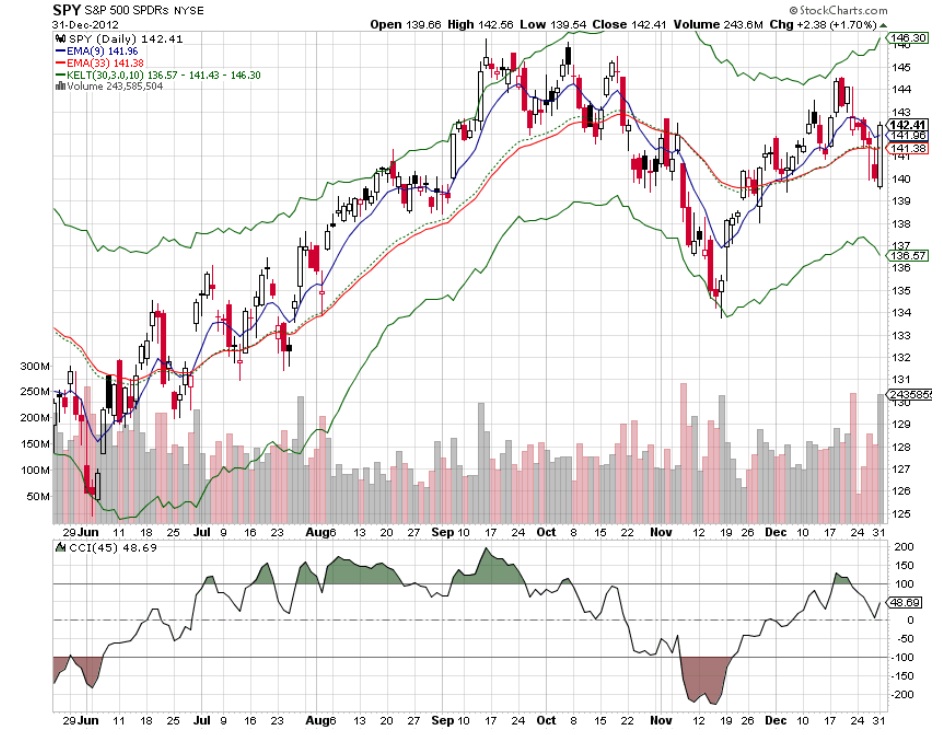 I’m not going to get too fancy, I have a few names I like and most of them are my current longs: ATML, CEDC, FB, GS, LULU, and SINA.  I intend to ratchet up my net exposure by adding to a few of these names, while searching out a decent entry on C and few short squeezes.  I also have to manage my way out of this SKS short.

The cash market hasn’t had a chance to react to this market, so I’ll watch the first half hour of trade to determine aggression.

END_OF_DOCUMENT_TOKEN_TO_BE_REPLACED

Media will continue to report mundane news with a big surprise pitch.

Algorithmic trading will dominate the market more than last year.

The occasional glitches will be scolded, unless the market jerks higher.

Winter will be hard to shake in the Midwest and Northeast.

Cats will continue to dominate video and page view counts on the internet.

Tea will get way more popular.

My 2013 stock of the year, Citi (shitty) bank, will perform an esoteric defiance of gravity: 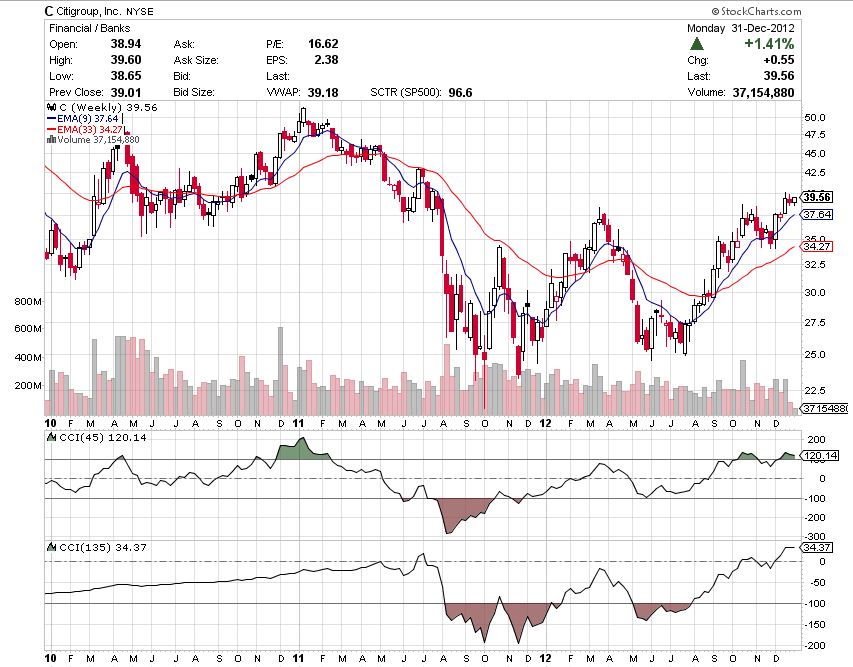 END_OF_DOCUMENT_TOKEN_TO_BE_REPLACED

Stocks are behaving well today and trading higher as they should as wealth generating vehicles.  We have seen more than a few short squeezes as the threat of a swoosh lower pared with the fiscal cliff uncertainty seems to have lulled bears into their favorite shorts.

I’ve spent most of the session getting Keith McCulloughed by my portfolio of 7 longs and 2 shorts.  I found the circle jerking action quite amusing for a few hours until my $M short decided it wanted to claim my middle finger.  Instead of attempting to punch the Macy-gator with my right hand, I simply aided the beast, and cut the finger loose.   I retain my $SKS short as my cost basis is much more in line with risk.  This could all change, but for now I’ll let my position simmer.

Beta neutrality aside and returning to the task of banking coin live for the good people of the internet, may I offer an interesting story to follow in 2013:

Central European Distribution Corp (CEDC) distributes alcohol in Poland and Russia and a few other forsaken lands in Eastern Europe.  They also make vodka.  They’re based in Jersey, where some of Amerka’s best criminals live.  Their stock price has been obliterated over the last two mismanaged years.

Here’s where it gets interesting–Stereotypical (and awesome James Bond villain) Russian billionaire Roustam “Your board of directors will now all be Russian” Tariko has taken the reigns of the company.  He owns Russian Standard, which both produces vodka and is a BANK.  ONLY IN RUSSIA baby!  If you think I’m overplaying the characteristics of this guy, check out his Q&A with the Financial Times.

I won’t sit here and tell you this stock is a sure win.  For all I know, it could trade down to zero before I have time to unwrap my 2013 calendar.  What I do know is where price is, back above its moving averages and in an easy-to-manage risk zone.

One of the bitterest disputes in the world is who makes the best vodka.  Russia and Poland both know they’re the best.  I can’t wait to see how this hostile dispute plays out.  In respect to the vodka gods, your homework assignment is to master the eyeball Paul.  Good luck.

END_OF_DOCUMENT_TOKEN_TO_BE_REPLACED

The closing hour of Friday featured as adult a temper tantrum as you will ever see, sending the futures spiraling lower like wily coyote falling off a cliff, POOF!

The meat of the sale happened during TPO letter R or GYARRRR in pirate.  That TRO represents the 15 minutes after the cash market closed on Friday where futures remain open.

So when you’re seeing futures any shade of green, it’s green in relation to this mess, which wasn’t priced into stocks.

Today’s open is very likely the only fireworks I will see this New Year’s Eve.  Would anyone like a glass of champagne?  Perhaps a mimosa?

END_OF_DOCUMENT_TOKEN_TO_BE_REPLACED

Lululemon Interest Pumps Up Into Holidays

When a product or company has a curious name like Lululemon, a name unique to a query such as a Google search, we can gain insight by looking at Google Trends. Notice the steady increase in search volume for the name. I know it’s only one data point, but it’s a big one. Searching for a company through Google is often the first step to making a purchase. This steady rising chart is one any business would be proud to call their own: 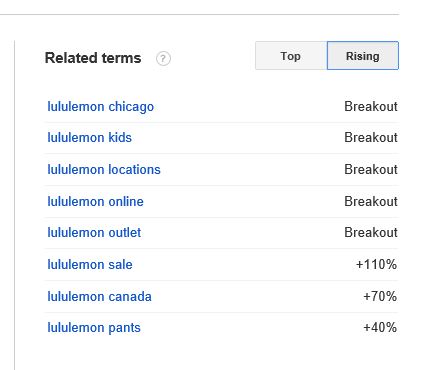 The search interest is much more steady than other female apparel trends, like Decker Outdoors’s Uggs:

I bought several family members Lululemon gear and they had no idea what the company was. Nowhere near saturation, and steadily gaining the public’s interest on Google. Those are two quality ingredients in the growth recipe.

Full Disclosure: I own shares of LULU and find their pants to enhance the female physique (read: booty).

END_OF_DOCUMENT_TOKEN_TO_BE_REPLACED

Note:  If you buy CEDC because of this post Premier Obama will move your family into a heroine infested housing block, and you may lose money.

END_OF_DOCUMENT_TOKEN_TO_BE_REPLACED

Sellers dominated the auction yesterday up until the late afternoon where we saw a vicious short squeeze.  The resulting candles for many charts look impressive, showing a long tail which suggests very aggressive responsive buying.  What is now vital for a constructive bull case is for the market to stabilize and work to build value higher.  This would involve initiative buying which is more confident than the gnarly reactionary buying we saw yesterday afternoon.

Although the buyers pulled off a heroic bout of buying, the market was successful in moving value significantly below where the markets traded last week.  The overnight market has a very large range and we’re set to gap lower as of 8:30am.

I consider 1399.50 on the e-mini S&P critical for the bull case today.  Losing that area could result in a quick revisit to yesterday’s lows.  Above I’ve boxed a low volume zone where price saw significant rejection by the market several times yesterday.  Should we see the market trade higher, seeing how the market behaves from 1408 – 1410.50 (also yesterday’s close) will be telling of the overall tenor of the tape.

END_OF_DOCUMENT_TOKEN_TO_BE_REPLACED

When the market is trending lower, one of the characteristics of the profile to monitor is whether the TPOs can recapture the high of the previous half hour. Alas we’ve officially seen the first TPO to accomplish the task at the one o’clock hour. It’s a start toward stabilization:

END_OF_DOCUMENT_TOKEN_TO_BE_REPLACED

Bad But Not Horrible—Girls Will Be Girls

We’re seeing follow-through today on yesterday’s selling and it’s decimating many bullish charts.  As of lunchtime the SPY has made a clean break through its 33ema.  However, the 99ema is right below and I’m hesitant to dismiss the bull case entirely until we see the markets put in a lower high.  With that in mind, I want to turn your attention to a relative strength standout today and hot money high flyer, Lululemon Athletica ticker LULU.  The stock is up today.  I started buying this morning but was shaken out by the broad selloff. Should we see the market stabilize and turn around (which it is yet to do) I could see this name rocketing higher.  Keep it on your watch list.

Aside from my quick jaunt in LULU ownership, I liquidated most of my longs.  Remaining longs are AWK, ATML, GS, RVBD, and FB and I’m short SKS and M.  Cash is hovering near 60%.

END_OF_DOCUMENT_TOKEN_TO_BE_REPLACED

What first catches my eye when viewing yesterday’s profile is its shape.  It nearly resembles a lowercase letter b.  The shape of the profile indicates sellers overwhelming the tape early in the session only to find interested buyers down below.  It’s often referred to as long liquidation which is the opposite of a short squeeze.  Once the temporary excess of supply from top tickers and chasers ends the market stabilizes.  Often times the occurrence of a long liquidation can mark the low of a trough.  However, I’ve noted a bias line where I want to see trade sustained above to be constructive on long positions.  The level also acted as resistance during the overnight session on three occurrences also before we blasted through it around 7am.  Watch trade in and around 1415: 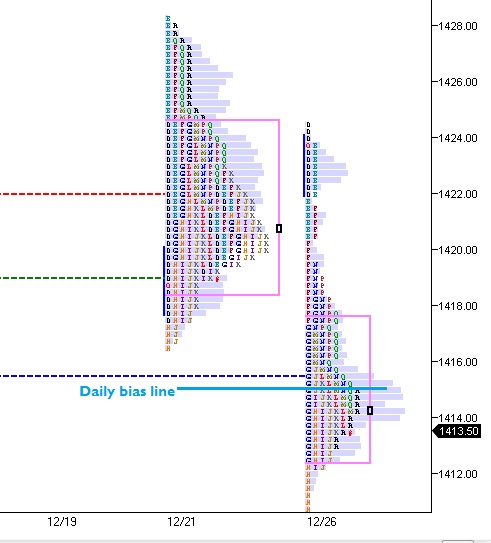