I turn dials and fiddle with knobs to hone in on harmonic rotations
Joined Oct 26, 2011
3,904 Blog Posts
@IndexModel

Broke routine this morning and spent my Sunday a bit differently. I slept late. Needed it. Staying up until 5am drinking hooch with the familia had me feeling a bit woozy. Yesterday. Add in seeing a few more than usual folks outside of my core quaranteam, the potential to become sick was elevated. I left bed around 9:30am and completed the research portion of my Sunday work then did 75 minutes of Zoom Yoga lead by a British lad with a knack for remote workouts. Then I came back here and did the report portion of the Sunday work.

To be clear—I read that study of out Wuhan last week and believe it. If the research appears in Nature, then I have no reason to question it. The main take away from the study is that in their study of 10 million humans, out of the 1,000 asymptomatic cases of Covid-19, ZERO, zed, none of these asymptomatic cases could be traced to an instance of infecting someone else into becoming symptomatic.

That is huge. It means if an ocular pat down does not reveal any symptoms on a person, and further observations also do not detect symptoms (symptoms that are quite easy to identify if you pay attention) then that person will not get you sick. Sure, keep some distance, especially from their disgusting mouths, but you can rest easy among strangers.

The overreaction paranoid state many folks remain in will be looked back on with disbelief. The virus sure seems to be a justification for progressing certain collectively desired agendas—which is fine. I’ve always found humans pretty disgusting. Even though I will wade into an oscillating pile of dancing ravers at 4am in some unsanctioned warehouse in Detroit and mindlessly sway for hours on end amongst halfway good looking young folks, put Raul in the airport and my face is covered and I am keeping as wide a space as possible from all the gen pop who are all around gross.

The smell has always been a major reason. I cannot stand the way people smell, especially overweight men who seem to either be too lazy for or incapable of proper hygiene. Next grossest overly perfumed women (or sprayed, I dunno wtf they douse themselves in but…gross). Then it goes dudes coated with cheap aerosol deodorizers. Then after that just plane old swamp ass. Then there is the revolting wind of a mismanaged mouth. Then sort of nasty but also kind of oddly satisfying is the brine that comes off of alcoholics which is almost kind of sweet.

But then 2020 came and I became an armchair expert on viruses and the fix was in—all my revulsion were justified. So now when I walk through the airport with all my skin and face covered people don’t look at me sideways. I am in the right.

Lads, I have been work from home for nearly nine years now. I withdrew from the corporate office, which was a stew of fartty wind and carry out food. A sickness could rip through whole departments in a matter of hours. The windows didn’t open.

There are so many potential good things that can come out of this over reaction to covid-19. That is where I intend to focus.

Face masks are great. Next should it should be generally accepted for me to make public comment about someone’s smell. If you are giving off a smell I can declare it like the town friar and folks will shine their smart phone lights on the smelly person while uploading their likeness to their personal social media accounts. This behavior will serve as a citizen mechanism for correcting the smelly human problem.

Anyone with special needs who cannot maintain a smell below what is perceived as generally acceptable will be permitted to carry a fog horn, which they can blow off to instantly end any shame event and subsequently reverse the shame onto the original smell shame…er…ers.

Stuff like this…these are the kind of positive changes that could take hold as we return to “normal”. Have you ever seen Demolition Man? A world more like that.

Anyhow, this entry has gone on far too long and I have to wonder if anyone is even left at this point. Haha. Only those who’ve put one foot in the pasture while keeping another firmly held in the game I suppose. The odd ones. The ones who’ve found freedom and know damn well what to do with it. Stuff like read the Raul blog.

If your goal is to become a consistently profitable trader, you have my word, I will continue to do my best to give little nudges along that path. But be warned, Sunday afternoon posts can veer into the plumb weird. So can my tweets and Instagram stories. But the research I put at the bottom of these and the morning trading reports are the real deal.

If you want to be a consistently profitable trader you need to know why. Why do you trade? If your answer is ‘to make money’ buddy you have more work to do. Make money. Great. For what? What will you do with it and why?

Why travel? Simply to drift around, aimlessly or for something more. To learn and bring home what you gained. Maybe…I cannot answer the question of why you trade.

I trade for a very specific reason. My goal is to achieve Operational Precision, a term I borrow from the third manned flight into earth orbit by NASA in the Sigma 7 craft. Said precision means conserving risk and trading as close as possible to my targets (levels). Operational Precision leads to consistent profitability. Consistent profitability leads to extracting as many fiat american dollars as possible from the global financial complex. Said dollars will be converted into cryptocurrency and real assets like cement and greenhouses and ground-to-air-heat transfer systems. These structures will be built to last hundreds of years, through any variety of human conditions and policy—be it nation states or something bigger, like a one world order of Google (which I am totally here for. My life is in Google’s hands and I feel safe in the eye of the omnipotent and immortal Google).

I could just as easily not trade and go live in a tunnel somewhere near a national forest, foraging for mushrooms and herbs and living a strong cocked healthy life.

Maybe that’s the difference. I love freedom. You can have order and the ease of living it brings. I am down for whatever as long as I’m free.

Shoot…I was supposed to end this blog entry long ago. Goodness, if you’re still here reading along, we may just be some kind of homies.

Anyhow, I will not be trading much this week. I have some affairs I’d like to have completely in order before stepping into the Julian year of 2021.

I’ll probably be floating around Twitter and if it feels right I may even set up a plan and trade the NASDAQ for a few hours. If not, just know I am steady hustling, putting in the work to extract fiat american at a healthy clip.

And now the 318th edition of Strategy Session. Enjoy:

**U.S. markets will be closed Friday in observation of New Year’s Day.

Gap down Monday followed by a morning of hard selling. Sellers discovered a responsive bid after probing back down into the prior Monday’s range. Auction turned higher and close strong Monday. Rest of the holiday shortened week was spent marking time on all major indices except the Russell, which continued to rally suggesting risk appetite is running extra high as investors become more aggressive in chasing returns. 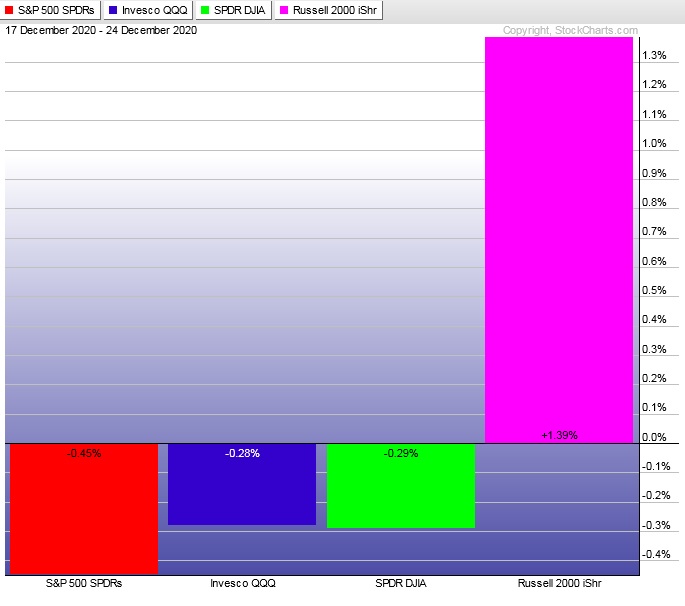 Energy remains aggressive and choppy and separate from the other sectors.  Tech showing a second week of divergent strength. 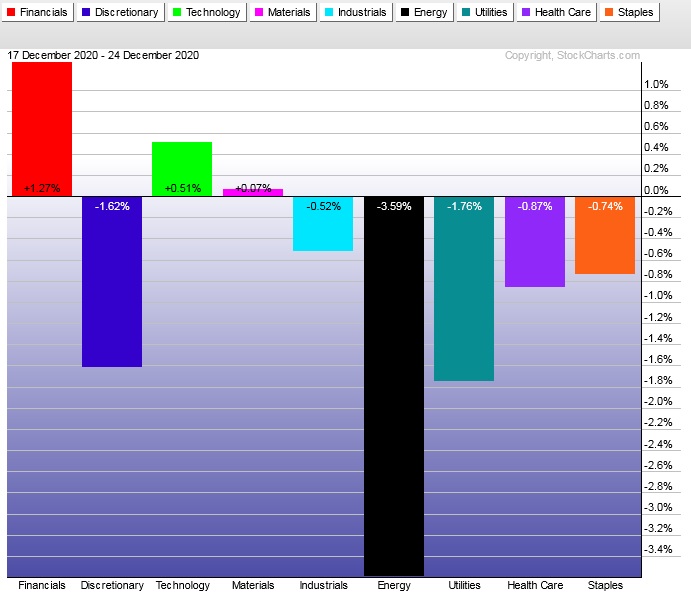 Industry flows skewed slightly to the positive side of the ledger but remain muted.

Tune out the news

Stocklabs defaults to displaying its wire-like news feed along the bottom of the screen. While it is an excellent feature, especially for assessing if a recent spike in the markets is associated with a breaking news event, sometimes it can be a distraction from whatever our objective is at the time.

To hide the feed, simply hover your mouse along the top edge of the news window right near the middle until you see a small down arrow appear. Click it once and the streaming news window will collapse out of sight into the bottom of the screen.

Find the small up arrow near the bottom center and click it once to return the news to your display.

Buyers continue to hold price steady along the highs during the holiday shortened week. 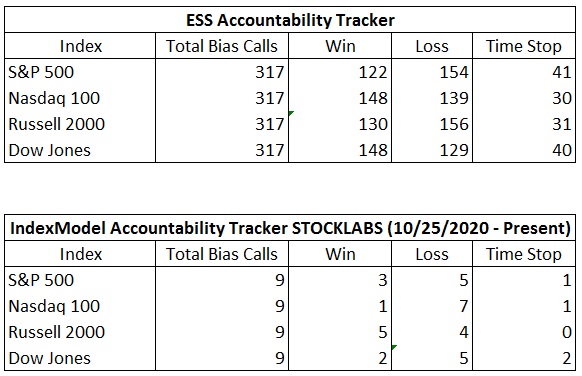 Transports bulls are not out of the woods yet. While price does continue to linger just below the recent high print, the daily chart still has the markings of a failed auction. One more big red candle and the failed auction could be in place.

Semiconductors showing balance along the highs of a quite mature rally. The longer they can trade sideways the stronger this market remains. A time based correction is the most bullish of all, especially after four big rotations higher. 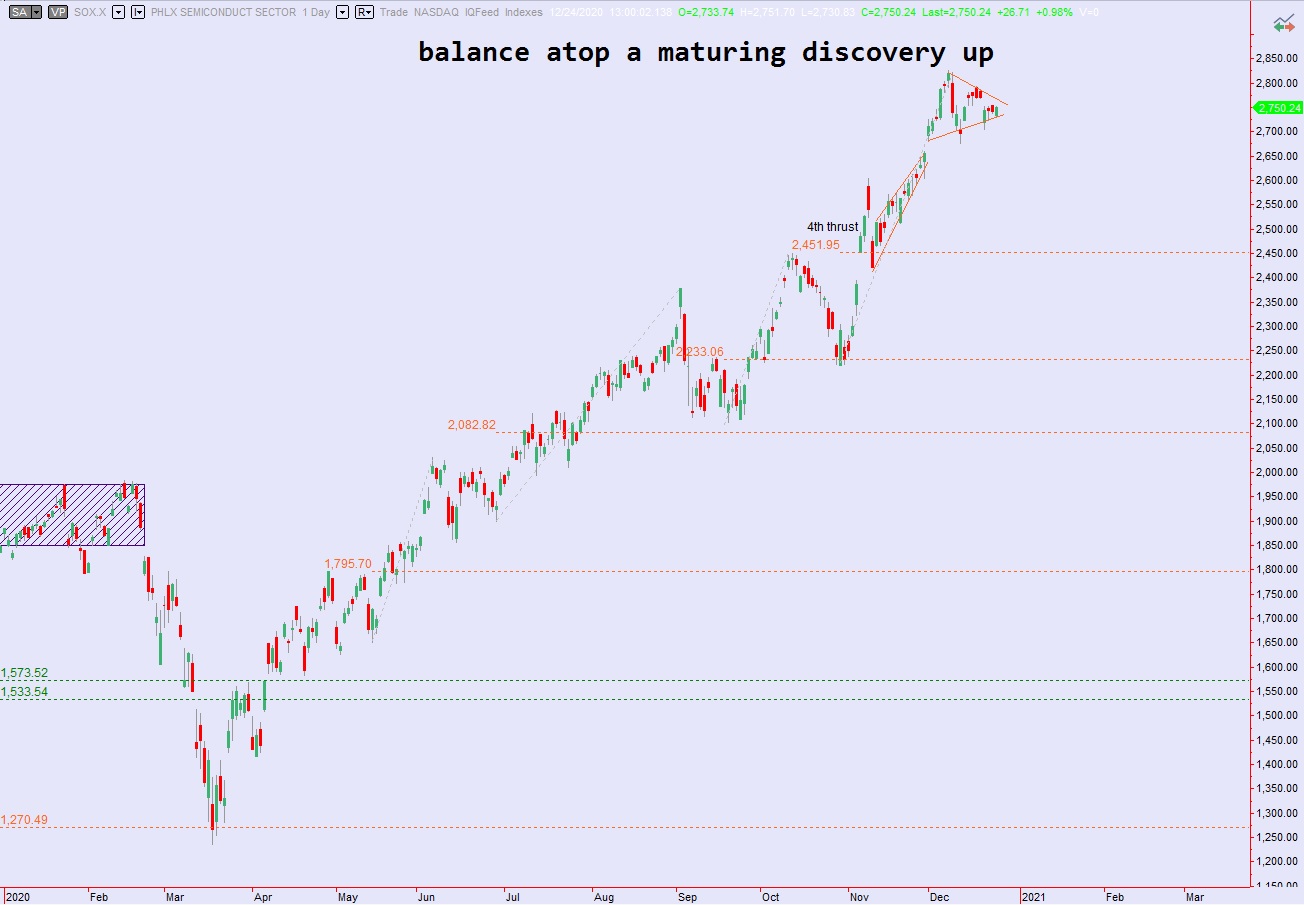 Bias model is neutral for a seventh consecutive week. No bias.

“I had crossed the line. I was free; but there was no one to welcome me to the land of freedom. I was a stranger in a strange land.” – Harriet Tubman

Trade simple, define your purpose for trading, why do you trade?

If you enjoy the content at iBankCoin, please follow us on Twitter
2020-12-27
Raul3
Share
Previous Holiday cruise control initiated, here is Wednesday NASDAQ trading plan
Next Everything an honest speculator needs to know heading into 2021 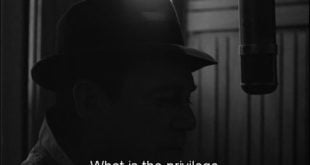 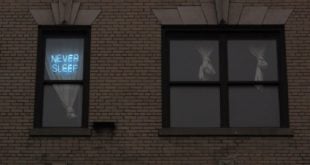 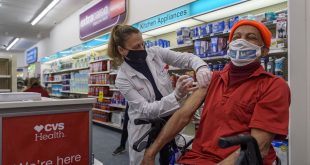 No trading report // headed to CVS for my second vaccine