The ramp the market has experienced in shares of Goldman Sachs has no doubt been a contributing factor to the improved sentiment of our market.  They were early to the party and have been steady appreciating a solid six months after dropping several no-so-subtle technical clues.  In tones of near disbelief (I hear tones through twitter) someone commented, “Their MBS business is picking up.”

I’ve been in nearly the entire duration of this move, including a table pounding.  With that in mind, and appreciating anyone who has read the scrolls housed in iBankCoin’s poorly lit halls, I want to update the cup-and-handle swing trade.

The cup and handle is a measured move from the lip of the cup to its bottom.  Don’t sweat pennies, the move measures thirty five dollars giving us an ultimate upside target of $160 BEHOLD: 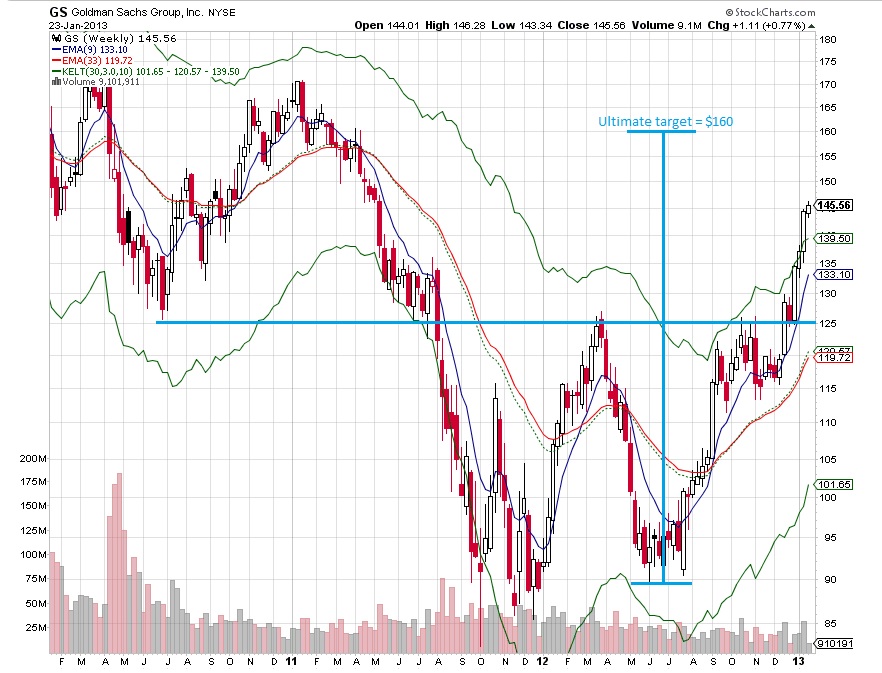 Am I sitting here, sipping gingerly from the cup of the Sach [sic] telling you price will go to one sixty?  MmMm, No.

If I could change one thing I’ve done during this trade it would be selling my shares prior to their most recent earnings.  I missed around 2% of the upside that day, but I bought right back in the next AM so I feel pretty good overall.  But here we are, having ripped and held overbought levels for some time.  This current move may have more gas in the tank, but to my eye not much.  I’m going to continue to move slow with this stock, making the market take me out, but I am considering getting very light in the name and positioning for a pullback.  Perhaps size it down to something relative the to the position I initiated in CREE today.

It’s still important to keep the final target of the cup-and-handle in our minds, especially since it aligns with an interesting level in price action.  The bulls completing this advance, and the time it takes is an important piece of market context.

Previous Keeping Your Cool
Next Clean Up Unfinished Business