Wed Jun 20, 2012 8:26am EST Comments Off on $JPM and Other Banks Win a Recent Battle of Derivatives Exposure Documentation

“JPMorgan Chase & Co. (JPM), UBS AG (UBSN) and two other banks won an attempt to block U.K. prosecutors from seizing documents that Italian authorities sought to use at a criminal trial over derivatives, a London judge ruled today.

The lenders, along with Deutsche Bank AG (DBK) and Depfa Bank Plc, won a ruling quashing a request for information from the U.K. Serious Fraud Office, Judge Peter Gross said in a judgment issued today in London. The SFO had an “obvious lack of authority” in the case, Gross said.”

END_OF_DOCUMENT_TOKEN_TO_BE_REPLACED

Tue Jun 19, 2012 11:37am EST Comments Off on Pandora Gets Crushed as Spotify Releases a New and Free Streaming Radio Service

Pandora was down as much as 5% today when the markets had a chance to look at a new free radio service by Spotify.

END_OF_DOCUMENT_TOKEN_TO_BE_REPLACED

$FB ads were a big question as GM and other companies pulled advertising dollars just as the company went public. A recent study shows that mobile ads on $FB do much better than their counterpart desktop ads.

END_OF_DOCUMENT_TOKEN_TO_BE_REPLACED

LOS CABOS, Mexico (Reuters) – China on Monday offered $43 billion to the IMF’s crisis-fighting reserves, joining other major emerging markets in pledging new funds to shore up the global financial system while demanding reforms to give the developing world more clout at the IMF.

China’s contribution, confirmed by a Group of 20 official, follows Russia’s pledge of $10 billion and is in line with a promise to supply the International Monetary Fund with extra firepower to help cope with the fallout from Europe’s debt crisis.

The leaders of Brazil, Russia, India, China and South Africa, meeting before a Group of 20 summit in Mexico, said they “agreed to enhance their own contributions to the IMF.”

They sought to tie the funds to long-delayed reforms that would give the developing world more say at the Washington-based Fund.

“These new contributions are being made in anticipation that all the reforms agreed upon in 2010 will be fully implemented in a timely manner, including a comprehensive reform of voting power and reform of quota shares,” the BRICS leaders said in a joint statement.

G20 finance ministers agreed in April to give the IMF $430 billion in new resources, but the breakdown of contributions has not been formally announced. The bulk of the extra IMF money will come from Europe, while the United States, which would need approval from a deeply split Congress, is not contributing.

In their public remarks in Los Cabos, Chinese officials declined to discuss sums and stressed the need to implement IMF quota reforms agreed in 2010.

The five BRICS nations represent 43 percent of the world’s population and about 18 percent of global economic output. They have about $4 trillion in combined reserves, with the lion’s share held by export powerhouse China.

Emerging economies have long demanded more say at institutions like the IMF to reflect their growing clout. Their frustrations have grown with the likely delay in implementing the 2010 deal that would boost their voting power and make China the third-largest voting member of the IMF.

END_OF_DOCUMENT_TOKEN_TO_BE_REPLACED

A computer scientist goes all in for poker.

END_OF_DOCUMENT_TOKEN_TO_BE_REPLACED

The Investor’s Guide to the Low Volatility Anomaly

Miller is out with an excellent post on this topic. He links to some research and graphs which illustrate his point.

Simply, accepted theory is that higher volatility stocks (ie riskier) should perform better than lower volatility ones over time. You know, the old risk-return tradeoff.

The thing is that in practice, they don’t.

There’s been a growing body of research and interest into this phenomenon and I thought it would be worthwhile to make some order out of this.

END_OF_DOCUMENT_TOKEN_TO_BE_REPLACED

After decades of misguided hysteria, the War on Drugs may have an epidemic worth freaking out about, and it’s spreading across state and demographic lines at the speed of the Internet. NATASHA VARGAS-COOPER travels the country to uncover the way-less-glamorous-than-it-sounds world of bath salts, which has already come to a strip mall near you.

END_OF_DOCUMENT_TOKEN_TO_BE_REPLACED

“NEW YORK (AP) — The co-founder of a large Russian Internet company wants to invest in the types of robotics envisioned in “The Jetsons” — that 1960s cartoon portraying a family from the future, with flying cars, robot maids and all sorts of push-button inventions.

The robots that Dmitry Grishin is looking for are aimed at the mass market. Beyond vacuum-cleaning devices, this could include robotics technologies used in transportation, entertainment or health care. He compares where the robotics industry is now to where computers were early 1980s, when companies were first bringing PCs to regular people’s desktops.

Grishin, the co-founder and chief executive of Mail.ru, believes robotics is ripe for the same sort of revolution, but the industry needs funding. So he is putting up $25 million to start a venture fund that will invest in robotics aimed at daily life.” 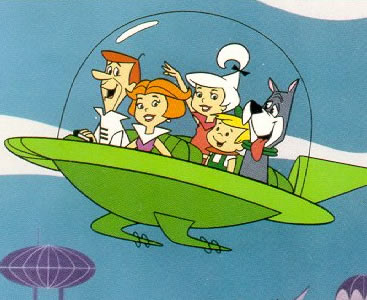 END_OF_DOCUMENT_TOKEN_TO_BE_REPLACED

“The U.S. Treasury Department is that much closer to winding down the Troubled Asset Relief Program (TARP).  Today came word that over the last week it has received some $245 million in proceeds from seven different financial institutions.  While none of these are major banks, the argument that the government did not do well here weakens just that much more as this was profitable.”

END_OF_DOCUMENT_TOKEN_TO_BE_REPLACED

Moody’s downgrades Spain to BAA3 from A3

END_OF_DOCUMENT_TOKEN_TO_BE_REPLACED 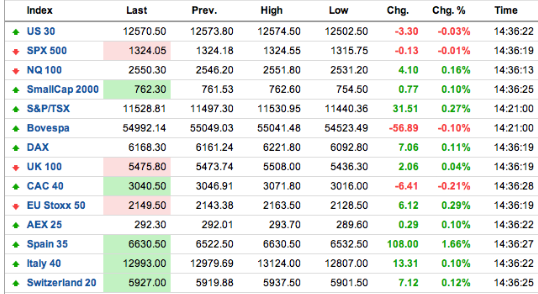 END_OF_DOCUMENT_TOKEN_TO_BE_REPLACED

Live Stream of Jamie Dimon Having His Testicles Roasted by Senate 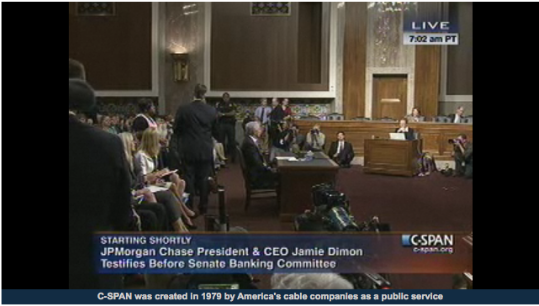 END_OF_DOCUMENT_TOKEN_TO_BE_REPLACED

The DOJ is investigating violations of antitrust in the cable industry.

END_OF_DOCUMENT_TOKEN_TO_BE_REPLACED

Police were dispatched to an apartment complex in Munnsville after numerous 9-1-1 reports about a woman punching and choking her three year old child. She was also reported to be assaulting a next door neighbor.

END_OF_DOCUMENT_TOKEN_TO_BE_REPLACED

Wed Jun 13, 2012 7:41am EST Comments Off on JPMorgan CEO Dimon to Apologize in Senate Testimony

“JPMorgan Chase‘s recent trading losses are an isolated incident and the bank is expected to be “solidly profitable” in the second quarter, Jamie Dimon, the bank’s chief executive, will tell the Senate Banking Committee on Wednesday.

Dimon will tell the committee the bank feels terrible about the trading debacle, while emphasizing the losses will only hurt shareholders, not taxpayers, and the bank maintains a “fortress balance sheet,” according to his prepared testimony.”

END_OF_DOCUMENT_TOKEN_TO_BE_REPLACED

Vanishing with the remains of their slaughtered victims, President al-Assad’s pumped up monsters are roaming Syria committing atrocities.

The death squads known as the Ghosts have swooped on villages and massacred women and children – slitting their throats or shooting them at point-blank range.

They disappear with the hacked remains in an effort to cover up their brutality. But experts say there is no mistaking the sickening work of these bearded paramilitary freaks.

Dressed in their unofficial uniform of combat trousers and black T-shirts the muscle-bound thugs are the butchers of Assad’s regime.

END_OF_DOCUMENT_TOKEN_TO_BE_REPLACED

I don’t guess the teachers in Illinois have ever heard of Wisconsin, or California, for that matter.

Nothing screams relevance in today’s economic and political climate like a teacher’s union threatening a strike if their members aren’t given a 24 percent pay raise, and yet that is exactly what is happening in Chicago, the nation’s third largest school district.