END_OF_DOCUMENT_TOKEN_TO_BE_REPLACED

“MetLife Inc. received a $3.2 million fine for loan service and disclosure practices connected to a banking unit that it’s planning to sell. As the New York insurer continues experiencing such problems, its investors have been increasingly exposed to the possibility of scandal-related losses this year.

MetLife’s financial statements have reflected an AGR score of 4 as of June, indicating higher accounting and governance risk than 96% of comparable companies. Between June 2010 and September 2011, MetLife’s AGR score had improved to as high as 48, putting it into average territory. Before that period the insurer’s AGR score had languished for at least five quarters at no higher than 7.”

END_OF_DOCUMENT_TOKEN_TO_BE_REPLACED

BREAKING: JUDGE DAVIS RULES AGAINST $AAPL IN FAVOUR OF $VHC

END_OF_DOCUMENT_TOKEN_TO_BE_REPLACED

Google Incorporates Your Gmail Into its Search Engine

Wed Aug 8, 2012 10:01pm EST Comments Off on Google Incorporates Your Gmail Into its Search Engine

This seems like a silly idea. As if we needed more choices in outr search results.

END_OF_DOCUMENT_TOKEN_TO_BE_REPLACED

To be Square is cool….

END_OF_DOCUMENT_TOKEN_TO_BE_REPLACED

NYT Said to be Selling About.com for $270 Million

“The New York Times Co. is selling its About.com website to Answers.com for $270 million, according to a person with knowledge of the deal.”

END_OF_DOCUMENT_TOKEN_TO_BE_REPLACED

90 fire fighters are trying to put out a blaze on the 88th floor of WTC.

END_OF_DOCUMENT_TOKEN_TO_BE_REPLACED

FLASH: US FUTURES ARE SOFT

END_OF_DOCUMENT_TOKEN_TO_BE_REPLACED

Possible da Vinci Painting Found in Scottish Farmhouse; Could Be Worth $150 Million

Tue Aug 7, 2012 11:02am EST Comments Off on Possible da Vinci Painting Found in Scottish Farmhouse; Could Be Worth $150 Million

Fiona McLaren, 59, had kept an old painting in her Scottish farmhouse for decades. She reportedly didn’t think much of the painting, which had been given to her as a gift by her father. But after she finally decided to have the painting appraised, some experts are speculating that it may in fact be a 500-year-old painting by Leonardo da Vinci and potentially worth more than $150 million.

“I showed it to him [auctioneer Harry Robertson] and he was staggered, speechless save for a sigh of exclamation,” said Ms. McLaren, according to The People.

The Daily Mail says the painting may be of Mary Magdalene holding a young child. The painting is now undergoing further analysis by experts at the Cambridge University and the Hamilton Kerr Institute, who will attempt to uncover its exact age and origins.

END_OF_DOCUMENT_TOKEN_TO_BE_REPLACED

ALERT: THE LARGEST REFINERY IN CALIFORNIA IS ON FUCKING FIRE!

*2 DISTINCT PLUMES OF SMOKES OBSERVED EMITTING FROM CVX REFINERY
*CHEVRON SPOKESWOMAN SAYS NOT SURE WHAT CAUSE OF FIRE IS :CVX US
*CHEVRON RICHMOND REFINERY HAS EVACUATION ON EMISSIONS: FILING

LIVE FEED OF THE SON OF A BITCH BURNING DOWN

END_OF_DOCUMENT_TOKEN_TO_BE_REPLACED

Tom Joyce: ‘It Was a Very Big Mistake”

Appearing on CNBC this morning, Joyce said the it was “absolutely” the best deal and the board was confident “we made the right choice.” He said there was a “big number” of parties interested in a deal, including private equity, clients and distressed investors.

END_OF_DOCUMENT_TOKEN_TO_BE_REPLACED 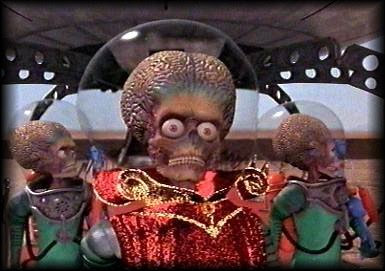 END_OF_DOCUMENT_TOKEN_TO_BE_REPLACED

Art Cashin: The End of an Error

The End Of An Error – The conversation on both the floor and the financial media was dominated Wednesday morning
by a series of apparently erroneous trades.

Between the 9:30 opening and about 10:15, a series of larger than normal orders spewed onto the floor. A later post
mortem would reveal that there were approximately 150 different companies involved.

The orders were so large that in some cases they represented the average volume for 10 or even 20 days. Some may have
been subdivided into a series of smaller lots.

Things almost got ugly as the sharp price movements in the stocks produced sharp movements in the options for those
stocks. That set up a possible feedback loop with stocks influencing options which in turn influenced the stocks again.
That could have turned into a flash crash style chain reaction.

Luckily, the system worked, as humans intervened and several circuit breakers kicked in. Some stocks were temporarily
halted and the negative chain reaction was interrupted briefly but effectively. A notable victory for the humans.

Knight Trading, through whose system most of the orders appeared to have been transmitted, was said to turn away
further orders, presumably to limit client risk. The market seemed to interpret that as the problem was unresolved, and
leaned on the stock.

In five decades, we have seen all manner of errors. Some are simple misunderstandings. “Buy 5 million dollars worth of
IBM” becomes “Buy 5 million shares of IBM.”

Some are the results of short cuts. Several decades back, when program trading was in its infancy, some traders at Kidder
Peabody tried to reduce the number of key strokes. Since we only traded in round lots of 100 shares or more, the last two
zeroes were redundant. So, they taught the computer that when you hit a 1, the computer should automatically add two
zeros to make it 100.

That worked fine until one lazy summer day, a trader told an intern to sell 1700 shares of Boeing (BA) The unknowing kid
naturally typed in 1700 and the computer added 00 making the 1700 into 170,000 shares.

It might have been caught but the computer had been taught another shortcut. To keep their orders from being caught
up in a “large order net” and handed to a human, they taught the computer to slice and dice large orders into multiple
orders of 500 shares.

So, on a lazy summer afternoon, the auto-routing mechanism at the Boeing post began to shoot orders out like a machine
gun. Luckily, the day was slow enough that a human caught it before more than 50,000 had been executed.

Errors on Wall Street have a long history, unfortunately.

END_OF_DOCUMENT_TOKEN_TO_BE_REPLACED

TRAGEDIA: SPANISH MARKETS ARE IN CRASH MODE- DOWN 5% 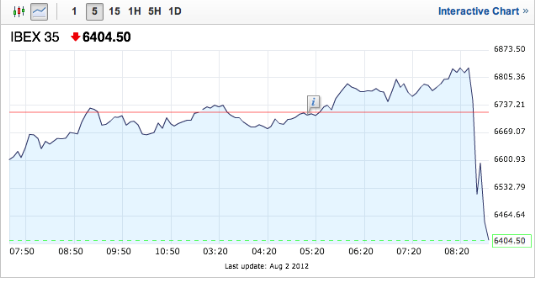 END_OF_DOCUMENT_TOKEN_TO_BE_REPLACED

VOLATILITY: FUTURES GIVE IT ALL BACK, AND MORE!

Futures are now down 55 after the ECB disappoints with no interest rate cuts or LTRO, just talk.

That is a reversal of nearly 150 Dow points.