13Things Mainstream Media Has Failed to Tell You

A little humor before you become hypnotized by $FB

The nation of Greece said sorry to the European Union with a present of an enormous wooden horse…A gift tag attached to the horse, which is surprisingly light for its size and has small holes along the length of its body, suggested that it should be placed in the bank’s vaults overnight to avoid it being targeted by thieves.

END_OF_DOCUMENT_TOKEN_TO_BE_REPLACED

Welcome to Life: The Singularity

END_OF_DOCUMENT_TOKEN_TO_BE_REPLACED

Remember when the story broke the losses were only $2 billion, but could rise; well they have risen to $3 billion and it has been estimated that losses could top out at $8 billion.

END_OF_DOCUMENT_TOKEN_TO_BE_REPLACED

Another Win for the TSA AKA Totally Stupid Assholes

Tue May 15, 2012 4:55pm EST Comments Off on Another Win for the TSA AKA Totally Stupid Assholes

This story makes you wonder how secure is our security.

END_OF_DOCUMENT_TOKEN_TO_BE_REPLACED

The “Justice” Department Opens an Inquiry into $JPM

END_OF_DOCUMENT_TOKEN_TO_BE_REPLACED

Mon May 14, 2012 9:12pm EST Comments Off on HBO Developing New Comedy Series, Starring Will Ferrell, Based on Wall Street

This will be classic.

EXCLUSIVE: The Other Guys gang is back together, this time on HBO. The pay cable network is developing a comedy project for Rob Riggle to star and produce. The single-camera comedy, based on an idea by Riggle, is being written by Adam McKay and Chris Henchy. Set in the world of bond traders in 1980s Wall Street, it revolves around a successful, hard-living boss (Riggle) who lives a dark, self-centered, unhealthy life. McKay and Henchy are executive producing with their Gary Sanchez Prods partner Will Ferrell as well as Mark Wahlberg, Stephen Levinson, Peter Principato and Paul Young. The project, which stems from Riggle’s development deal with HBO, reunites three of the stars of The Other Guys – Ferrell, Walhberg and Riggle — with the film’s writers McKay and Henchy. It was on that movie that McKay, Wahlberg, Ferrell and Riggle formed a working relationship and set out to find a project on which to collaborate

END_OF_DOCUMENT_TOKEN_TO_BE_REPLACED

“China’s home sales transaction value fell 16 percent in April from the previous month as the government reiterated it will keep curbs on the property market.

The value of homes sold declined to 315.4 billion yuan ($50 billion) from 373.3 billion yuan in March and 324.9 billion yuan a year earlier, based on the difference between the National Statistics Bureau’s data for the first four months of the year and the first quarter. Housing sales value from January to April fell 13.5 percent to 1.02 trillion yuan from a year earlier, according to the data.”

END_OF_DOCUMENT_TOKEN_TO_BE_REPLACED

Don’t Hold Your Breath; Europe Rallies on the Attempt by Greece to Form a Coalition Government

Thu May 10, 2012 8:17am EST Comments Off on Don’t Hold Your Breath; Europe Rallies on the Attempt by Greece to Form a Coalition Government

END_OF_DOCUMENT_TOKEN_TO_BE_REPLACED

Even if I tried, I couldn’t make this stuff up. The sexually harassing comments made by this “lady” read like a scene right out of Horrible Bosses. Here is a sample:

17.      On or about July 28, 2011, Defendant Matranga was sitting in a chair adjacent Plaintiff’s desk. Plaintiff dropped a pen and went to retrieve the pen from the floor. When he did so Defendant Matranga stated, “While your down there, why don’t you help yourself to some ‘duck taco’.”

END_OF_DOCUMENT_TOKEN_TO_BE_REPLACED

REVEALED: THE REAL REASON WHY GREECE IS DEFAULTING (VIDEO)

On the morning of the massage Travolta had “a strange demeanor, bloodshot eyes and climbed onto the already setup massage table…Travolta removed the entire sheet from his body, and he claimed the sheets were sticky and could not tolerate the heat…Travolta further indicated that he likes a lot of “Glutes” work meaning a massage on his buttocks…While he was massaging near Travolta’s buttocks area, Travolta would open his legs and spread his butt cheeks open and had a full erection and would maneuver in a way to try to force Doe Plaintiff No. 2 to touch his anus and around his anus.”

As the massage came to an end “Travolta suddenly turned on his stomach with his legs wide open with a full erection. He then tried to force Doe Plaintiff No. 2’s hand on Travolta’s scrotum. Then, Travolta started to grab, rub and caress Doe Plaintiff no. 2’s upper thighs and buttocks….Travolta still had an erection and wanted his abdominals done, but Travolta’s erection was in the way and he refused to have his penis covered by a sheet of a pillow case cover…Travolta started masturbating about 15 minutes left in the session, and Doe Plaintiff No.2, said he had to go,” the docs state.

The masseur “complained to all of his supervisors and many coworkers to no avail.” Travolta allegedly went down “to the spa that Plaintiff No. 2 worked at, which is part of the resort Travolta was staying at, as opposed to having Doe Plaintiff No. 2 go to his room. Travolta DEMANDED that Doe Plaintiff No. 2 come back and do it again, and he refused,” the lawsuit asserts.

According to Access Atlanta, Travolta was spotted eating dinner at The Palm restaurant in the swanky enclave of Atlanta, Buckhead aroound January 25 2012, and he was in town filming the movie Killing Season with Robert De Niro in Georgia.

Travolta’s pit-bull attorney, Marty Singer, told us on Monday, that “The problem in America is anyone can sue anyone. However, in this case this unidentified plaintiff and his lawyer will regret they filed this fabricated suit. We intend to sue both of them for malicious prosecution.”

END_OF_DOCUMENT_TOKEN_TO_BE_REPLACED 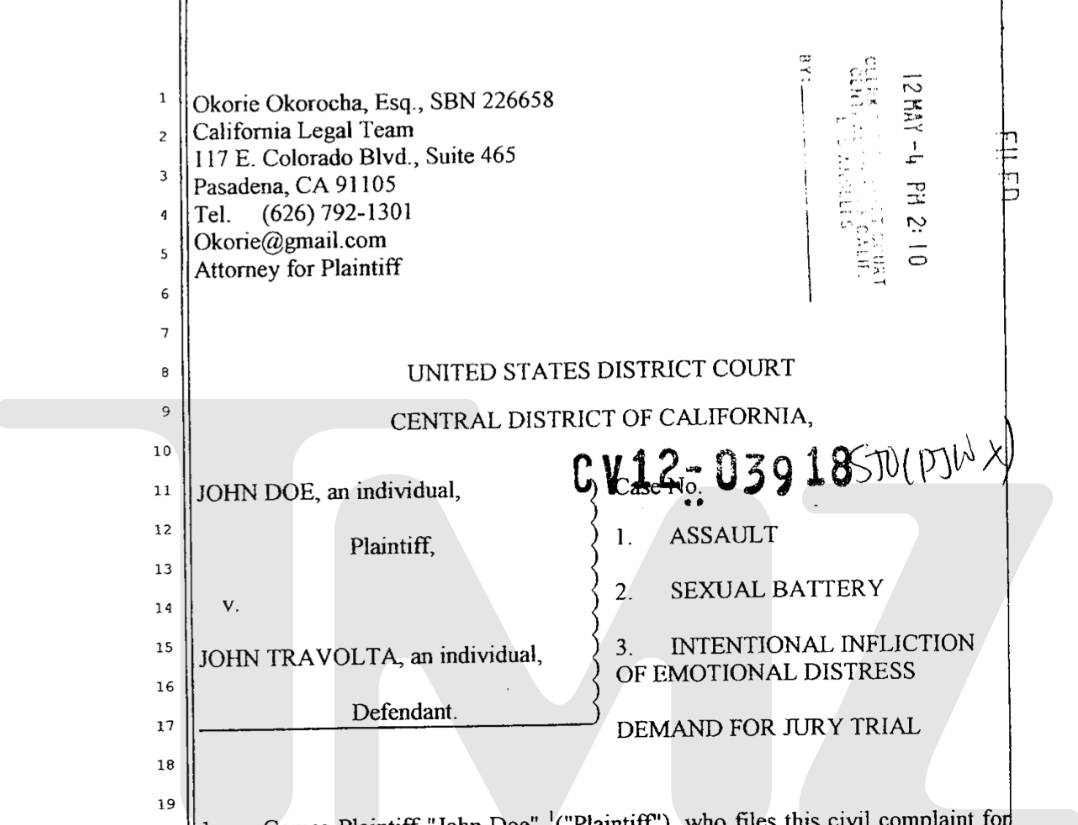 END_OF_DOCUMENT_TOKEN_TO_BE_REPLACED

John Travolta has been sued by a masseur, who claims the actor tried to have sex with him during a session.

According to the lawsuit, Travolta saw the masseur’s ad online, and scheduled an appointment for $200 an hour. The masseur did not know it was Travolta when the appointment was booked, but followed instructions and met up with a black Lexus SUV, which Travolta was driving.

According to the suit, Travolta and the masseur, who says he saw Trojan condoms in the center console, drove to the Beverly Hills Hotel and went to Travolta’s bungalow.

The suit claims Travolta stripped naked, appearing semi-erect. The masseur says he told Travolta to lay down on the table and the first hour went without incident. Then, according to legal docs, Travolta began rubbing the masseur’s leg, touched his scrotum and the shaft of his penis.

The masseur claims he told Travolta he did not have sex with his clients, but Travolta was undeterred, offering to do a “reverse massage,” adding, “Come on dude, I’ll jerk you off!!!”

The suit goes on to allege Travolta then masturbated and told the masseur he got to where he was “due to sexual favors he had performed when he was in his ‘Welcome Back Kotter’ days,” adding “Hollywood is controlled by homosexual Jewish men who expect favors in return for sexual activity.”

The masseur — who is only listed as John Doe — claims Travolta called him a loser, but then doubled the hourly rate and sent him on his way.

END_OF_DOCUMENT_TOKEN_TO_BE_REPLACED

Almost every recent SNL has opened with a skit mocking the GOP. Last’s night opening skit would have changed that, but for some reason, SNL scrapped the skit. Here is the transcript of the scrapped skit. Read the article which broke this story here.

END_OF_DOCUMENT_TOKEN_TO_BE_REPLACED

AUDIO: GMCR and The Case of the Killer Hot Cocoa

Highlights from the GMCR call.