Dennis Kuncinich Has a Message For Occupy Wall St.

END_OF_DOCUMENT_TOKEN_TO_BE_REPLACED

SHOCK: Solyndra was Poised to Receive ANOTHER Huge Loan

Wed Oct 5, 2011 1:03pm EST Comments Off on SHOCK: Solyndra was Poised to Receive ANOTHER Huge Loan

END_OF_DOCUMENT_TOKEN_TO_BE_REPLACED

Lunch Break: How Much is Too Much When Our Finances Are Out of Control ?

END_OF_DOCUMENT_TOKEN_TO_BE_REPLACED

FLASH: Europe is Roasting the Stomachs of Short Sellers

END_OF_DOCUMENT_TOKEN_TO_BE_REPLACED

Protesting is not good for GDP

END_OF_DOCUMENT_TOKEN_TO_BE_REPLACED

The war of the phone makers continues…

END_OF_DOCUMENT_TOKEN_TO_BE_REPLACED

Sprint down only 1% compared to 17% earlier

END_OF_DOCUMENT_TOKEN_TO_BE_REPLACED

Retailers Realize Lost Customers are Not Coming Back

Tue Oct 4, 2011 8:28am EST Comments Off on Retailers Realize Lost Customers are Not Coming Back

Not until balance sheets are repaired and people get liquid

END_OF_DOCUMENT_TOKEN_TO_BE_REPLACED

Fannie Mae, the mortgage finance giant, learned as early as 2003 of extensive foreclosure abuses among the law firms it had hired to remove troubled borrowers from their homes. But the company did little to correct the firms’ practices, according to a report issued Tuesday.

Only after news reports in mid-2010 began to describe the dubious practices, like the routine filing of false pleadings in bankruptcy courts, did Fannie Mae’s overseer start to scrutinize the conduct. The report was critical of that overseer, the Federal Housing Finance Agency, and was prepared by the agency’s inspector general.

In one notable lapse, even after the agency reported problems to Fannie Mae in late 2010 about some of the approved law firms, it did not request a response from the company, the report said.

“American homeowners have been struggling with the effects of the housing finance crisis for several years, and they shouldn’t have to worry whether they will be victims of foreclosure abuse,” said Steve Linick, inspector general of the finance agency. “Increased oversight by F.H.F.A. could help to prevent these abuses.”

The report is the second in two weeks in which the inspector general has outlined lapses at both the Federal Housing Finance Agency and the companies it oversees — Fannie Mae and Freddie Mac. The agency has acted as conservator for the companies since they were taken over by the government in 2008. Its duty is to ensure that their operations do not pose additional risk to the taxpayers who now own them. The companies have tapped the taxpayers to cover mortgage losses totaling about $160 billion.

Elijah E. Cummings, the Maryland Democrat who is the ranking member of the House Committee on Oversight and Government Reform and who requested the inspector general’s report, said in a statement, “As a member of Congress and an attorney, I find the systemic failures by F.H.F.A. and Fannie Mae to adequately oversee these foreclosure law firms to be a breach of the public trust and an assault on the integrity of our justice system.”

The new report from the inspector general tracks Fannie Mae’s dealings with the law firms handling its foreclosures from 1997, when the company created its so-called retained attorney network. At the time, Fannie Mae was a highly profitable and powerful institution, and it devised the legal network to ensure that borrower defaults would be resolved with efficiency and speed.

The law firms in the network agreed to a flat-rate fee structure and pricing model based on the volume of foreclosures they completed. The companies that serviced the loans for Fannie Mae, were supposed to monitor the law firms’ performance and practices, the report noted

After receiving information from a shareholder in 2003 about foreclosure abuses by its law firms, Fannie Mae assigned its outside counsel to investigate, according to the report. That law firm concluded in a 2006 analysis that “foreclosure attorneys in Florida are routinely filing false pleadings and affidavits,” and that the practice could be occurring elsewhere. “It is axiomatic that the practice is improper and should be stopped,” the law firm said.

The inspector general’s report said that it could not be determined whether Fannie Mae had alerted its regulator, then the Office of Federal Housing Enterprise Oversight, to the legal improprieties identified by its internal investigation.

Amy Bonitatibus, a Fannie Mae spokeswoman, declined to comment on the inspector general’s report, but said that the 2006 legal analysis identified a specific issue with the practice of filing lost-note affidavits, which the company immediately addressed.

The inspector general said that both Fannie Mae and its regulator appear to have ignored other signs of problems in their foreclosure operations. For example, the Federal Housing Finance Agency did not respond to borrower complaints about improper actions taken by law firms in foreclosures received as early as August 2009, even though foreclosure abuse poses operational and financial risks to Fannie Mae.

Nevertheless, a few months later and just before its takeover by the government, Fannie Mae began requiring the banks that serviced its loans to use only those law firms that were in its network. By then, 140 law firms in 31 jurisdictions were in the group. Among the largest firms in the network was the David J. Stern firm in Plantation, Fla., which was handling more than 75,000 foreclosure actions a year before Fannie Mae terminated it because of vast problems with its legal work.

Finally last fall, after an outcry over apparently forged foreclosure documents and other improprieties, the Federal Housing Finance Agency began investigating the company’s process. In a report issued early this year, it determined that Fannie Mae’s management of its network of lawyers did not meet safety and soundness standards. Among the reasons: the company’s controls to prevent or detect foreclosure abuses were inadequate, as was the company’s monitoring of the law firms. “If a law firm self-reported no issues as it processed cases,” the inspector general said, “then Fannie Mae presumed the firm was doing a good job.”

The agency is still deciding how to handle the lawyer network, the inspector general said.

Mr. Cummings has asked the federal housing agency to consider terminating the program.

Officials at the housing agency agreed, however, with the recommendations in the inspector general’s report. Corinne Russell, a spokeswoman for F.H.F.A. said the agency was concluding its supervisory work in this area and would direct Fannie Mae to take necessary action when the work was completed.

In a response, the agency said that by Sept. 29, 2012, it would review its existing supervisory practices and act to resolve “deficiencies in the management of risks associated with default-related legal services vendors.”

END_OF_DOCUMENT_TOKEN_TO_BE_REPLACED

Of course a horrible tape does not help either…

END_OF_DOCUMENT_TOKEN_TO_BE_REPLACED

Not sure why, but i have refrained from posting anything on this matter. Perhaps with the alleged hundreds of thousands   of protesters it will be hard to ignore as they have pledged to protest until new years.

At any rate, protest you may if you apply for the permission to do so. Don’t fuck up other peoples lives or your cause will be lost.

To the idiot who was quoted…well i do not think they are all hippies; get some glasses you working pleb.

As for the protesters…well I’d rather see your fervor in a get out the vote campaign.

Perhaps a few hundred thousand of you could tie up the phone lines at every congressman’s office. Perhaps try a calling campaign upon the banks themselves to make a shake up. But please don’t go Euro trash despite the foul play of the police.

END_OF_DOCUMENT_TOKEN_TO_BE_REPLACED

California Pulls Out of 50 State Negotiation Over Robosigning

Sat Oct 1, 2011 10:36am EST Comments Off on California Pulls Out of 50 State Negotiation Over Robosigning

CA could not accept the terms of reduced claims being the largest foreclosure state in the nation. Right fully so i might add.

END_OF_DOCUMENT_TOKEN_TO_BE_REPLACED 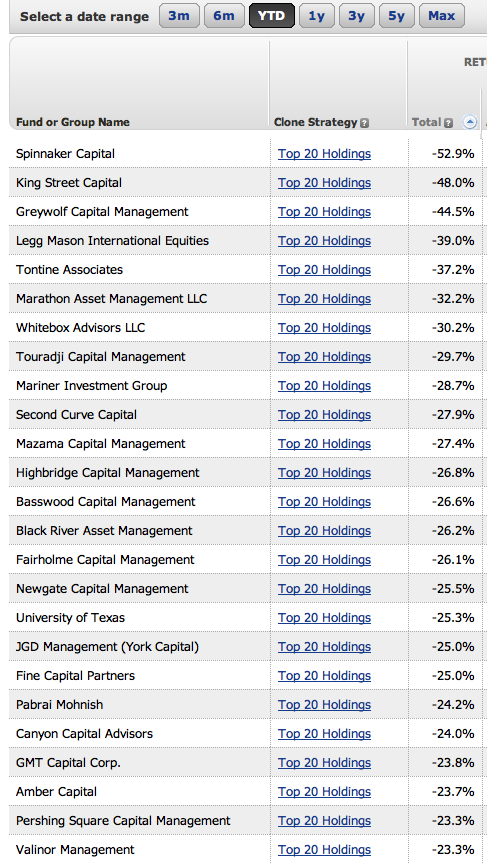 END_OF_DOCUMENT_TOKEN_TO_BE_REPLACED

JAT Capital Management is Getting SMOKED! 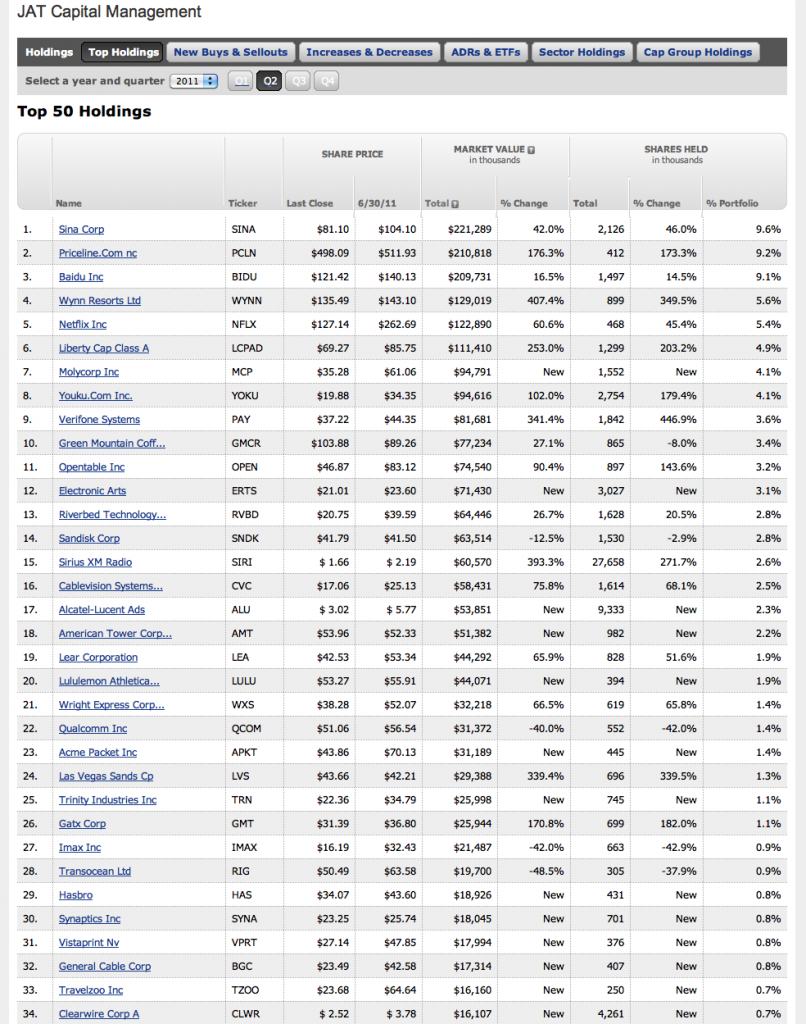 END_OF_DOCUMENT_TOKEN_TO_BE_REPLACED

Thu Sep 29, 2011 1:52am EST Comments Off on Oracle Issues a Scathing Statement Regarding Autonomy

“After HP agreed to acquire Autonomy for over $11.7 billion dollars, Oracle commented that Autonomy had been ‘shopped’ to Oracle as well, but Oracle wasn’t interested because the price was way too high. Mike Lynch, Autonomy CEO, then publically denied that his company had been shopped to Oracle. Specifically, Mr. Lynch said, “If some bank happened to come with us on a list, that is nothing to do with us.” Mr. Lynch then accused of Oracle of being ‘inaccurate’. Either Mr. Lynch has a very poor memory or he’s lying. ‘Some bank’ did not just happen to come to Oracle with Autonomy ‘on a list.’ The truth is that Mr. Lynch came to Oracle, along with his investment banker, Frank Quattrone, and met with Oracle’s head of M&A, Douglas Kehring and Oracle President Mark Hurd at 11 am on April 1, 2011. After listening to Mr. Lynch’s PowerPoint slide sales pitch to sell Autonomy to Oracle, Mr. Kehring and Mr. Hurd told Mr. Lynch that with a current market value of $6 billion, Autonomy was already extremely over-priced. The Lynch shopping visit to Oracle is easy to verify. We still have his PowerPoint slides.”

END_OF_DOCUMENT_TOKEN_TO_BE_REPLACED

This is the performance of Paulson’s holdings, over the past three months, excluding his near full wipe out in Sino-Forest.