If you have yet to see Blake Griffin’s dunk, check out this sports science clip.

END_OF_DOCUMENT_TOKEN_TO_BE_REPLACED

Infographic: How Napping Can Help Your Business

Thu Feb 2, 2012 9:09pm EST Comments Off on Infographic: How Napping Can Help Your Business

END_OF_DOCUMENT_TOKEN_TO_BE_REPLACED

Last week, while covering an unrelated event in Park City, Utah, we stumbled upon a demonstration by a couple of guys from the company Liquipel, who we’d been hearing about for a few days and had been attempting to book for “This Could Be Big” since first seeing their video of an apparently waterproofed iPhone.

The video, and the subsequent coverage of it on the Internet, had boosted Liquipel’s visibility through the roof, but skeptic we remained… until the guys started dunking their specially treated iPhone into a tank of water, in front of our very eyes. Incredulous, we poked, we prodded, and examined the surface of the phone, and everything remained in working order despite repeated exposure to water. Their explanations were somewhat vague, but the results seemed to be there. Of course, the kicker was when they brought out a specially treated piece of tissue paper that demonstrated the same resistance to water as their Liquipel-treated iPhone.

END_OF_DOCUMENT_TOKEN_TO_BE_REPLACED

A Bunch Of Charts For You

END_OF_DOCUMENT_TOKEN_TO_BE_REPLACED

A throwaway remark aimed at thanking his parents for supporting his career has made Tom Brady “the most-hated man in Buffalo.”

During a media session on Wednesday, the New England Patriots quarterback was asked to describe the commitment made by his father, Tom, Sr., in the early days of his career. Brady had no idea he was about to stumble into a storm of controversy — at least in the proud New York city by the Canadian border.

“My dad was always there to support me,” Brady said. “He’s been there every step of the way. Then I went to school a long ways from home (University of Michigan) and he and my mom were there at every home football game that they could possibly be at and a lot of road games, too.

“And even when I started my pro career, he traveled to Buffalo. I don’t know if you guys have ever been to the hotels in Buffalo — they’re not the nicest places in the world — but he would still travel to those. It was just great to grow up in a house like that and feel so supported by your mom and dad.”

END_OF_DOCUMENT_TOKEN_TO_BE_REPLACED

In this week’s cover story, the celebrity weekly says Moore was on a party binge when friends called 911 on January 23 saying the actress was having convulsions after smoking an unidentified substance.

END_OF_DOCUMENT_TOKEN_TO_BE_REPLACED

The documents show, as expected, that Facebook is thriving. The company earned $668 million on revenue of $3.7 billion last year, according to the filing. Both figures nearly doubled from 2010.

END_OF_DOCUMENT_TOKEN_TO_BE_REPLACED

“I’ll be honest with you,” Rodgers said on ESPN 540 in Milwaukee. “I was a little bit disappointed. I felt like some of the guys on the NFC side embarrassed themselves.”

The AFC routed the NFC 59-41 in a game that drew boos at Aloha Stadium for its lack of early intensity. Rodgers, who started and played the first quarter for the NFC, didn’t name specific players.

“I was just surprised that some of the guys either didn’t want to play or when they were in there didn’t put any effort into it,” Rodgers said.

END_OF_DOCUMENT_TOKEN_TO_BE_REPLACED

Facebook who? On the same day the tech world awaits the social network’s IPO filing, fledgling rival Google+ is set to break 100 million users, according to one analyst. Full Story

END_OF_DOCUMENT_TOKEN_TO_BE_REPLACED

Here is an update on “the 2012 stock of the year contest” after 1 month, click here for leader board. 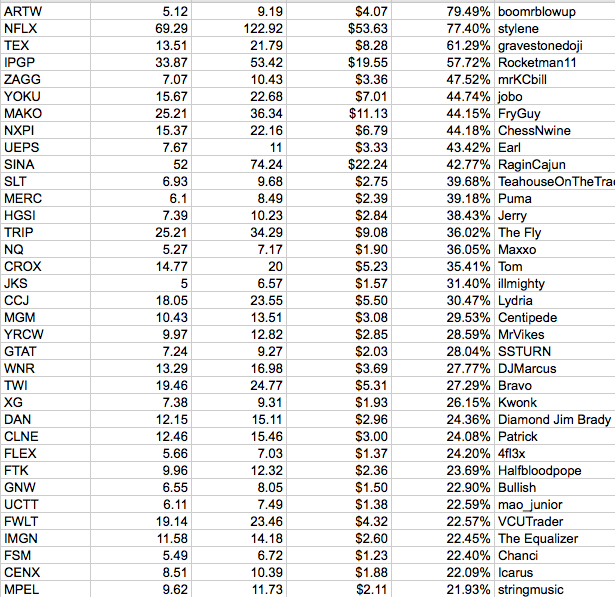 END_OF_DOCUMENT_TOKEN_TO_BE_REPLACED

Feel like looking at charts? Here are about 80 stocks selected by the hybrid mover screen inside The PPT.

END_OF_DOCUMENT_TOKEN_TO_BE_REPLACED

Short Setups To Watch In Case The Bears Mean Business!

Here are some trading ideas from TraderStewie, click here for charts.

Setups are so hot, they made breaking news.

END_OF_DOCUMENT_TOKEN_TO_BE_REPLACED

In a development lending sudden credence to theories that our world will end in 2012, Tim Tebow is being hunted by a Kardashian sister.

“Kim (Kardashian) has a big crush on Tim,” a friend told The National Enquirer. “She says he’s not only very handsome but seems like a guy with really strong values.”

“Tim’s been made aware of Kim’s crush, and although flattered, he’s not interested,” a source told The Enquirer. “He’s an avowed virgin who’s saving himself for marriage and is looking for a woman with similar values, not someone with two failed marriages and a sex tape in her past.”

So, with one swift hammer drop, the TimKim era is in the books.

END_OF_DOCUMENT_TOKEN_TO_BE_REPLACED

NEW YORK (AP) — Facebook founder Mark Zuckerberg turns up at business conventions in a hoodie. “Cocky” is the word used to describe him most often, after “billionaire.” He was Time’s person of the year at 26.

The company is expected to file as early as Wednesday to sell stock on the open market in what will be the most talked-about initial public offering since Google in 2004, maybe since the go-go 1990s. Read More…

END_OF_DOCUMENT_TOKEN_TO_BE_REPLACED

Will The iPhone 5 Replace Your Credit Cards?

“We’re rapidly moving to a world beyond plastic,” says Ed McLaughlin. “In many ways, plastic is just convenient packaging.”

McLaughlin heads up emerging payments at MasterCard, and he’s tasked with thinking big on the future of transaction technology. His group has dreamed up loads of creative ways to accept payments, from hacking an Xbox Kinect to pay-by-hand motion, to implanting NFC tech in ultrabooks, to scanning irises to prevent credit card fraud. But while many may find the wild future of post-plastic payments interesting, most consumers have just one question which they desperately want answered: When, oh when, can I start to pay via smartphone? Read More..