“Since the dark days of 2008, employers have taken some steps to fix the 401(k), the backbone of the nation’s private retirement-savings system. But Nobel laureateRobert C. Merton says that in the rush to upgrade these plans, plan sponsors and administrators have overlooked one big problem: They are managing these plans with the wrong goal in mind. 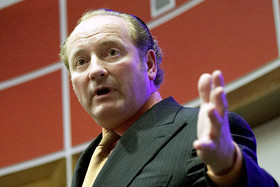 “The seeds of an investment crisis have been sown,” the MIT professor of finance writes in an article in the July-August issue of Harvard Business Review, which was published Tuesday. “The only way to avoid a catastrophe is for plan participants, professionals, and regulators to shift the mind-set and metrics from asset value to income,” writes Merton, who won the Nobel Prize in Economics in 1997.

In recent years, employers have tried to improve 401(k)s by introducing features such as automatic enrollment and products including target-date funds. But in his article and in a recent interview with Encore, Merton said these moves weren’t likely to be sufficient. To fix the 401(k), he argues, employers and the financial services companies that manage these plans must get past the ongoing obsession with two things: Account balances and annual returns. These metrics, Merton says, are far less important than one other: The amount of sustainable income an employee can expect to receive in retirement.

By disclosing annual income, instead of (or in addition to) an account balance, Merton says, employers will help employees quickly and easily calculate how much of their annual salary they can expect to replace in retirement, together with Social Security. As a result, employees will be better able to take action to ensure they are on track to retire as planned.

But that’s only half the battle. In order to accurately calculate how much retirement income a participant’s 401(k) balance will purchase, the plan sponsor must assume the money will be invested in an inflation-adjusted deferred annuity or long-term U.S. Treasury bonds. These investments, Merton writes, ensure “spendable income” that’s “secure for the life” of the bond or annuity and are “the very assets that are the safest from a retirement income perspective.”

That’s not to say that 401(k) money shouldn’t be invested in stocks. In fact, Merton says, 401(k) investment managers should invest participants’ savings in a mixture of “risky assets,” including equities, and “risk-free assets,” such as long-term U.S. Treasuries and deferred annuities…..”

If you enjoy the content at iBankCoin, please follow us on Twitter
2014-06-25
CRONKITE
Share
Previous The U.S. Readies Itself to Export Its First Black Gold Shipment Since the 70s
Next Islamic Caliphate is Born, World War III has BEGUN!