“For decades, Asia fueled its development by selling products to the West. That engine is now sputtering, threatening to sap the region’s economic expansion.

Combined exports from Asia’s four export powerhouses—China, Japan, South Korea and Taiwan—slid 2% in the first three months of this year from the same period last year.

China’s drop is particularly striking. Beijing reported Friday that its first-quarter current-account surplus, which measures all trade and one-time transfers, shrank to a three-year low.

Toyota Aqua hybrid vehicles sat parked ahead of shipment at the port of Sendai, Japan, on March 7.Bloomberg News

Exports have seen sharp downturns over the past two decades, after the 1997 Asian financial crisis and the 2001 bursting of the dot-com bubble. But they quickly rebounded to double-digit growth after little more than a year as the world’s economy healed.

Not this time. Exports jumped in 2010 in the wake of the global financial crisis. But they have slumped since and now are barely in positive territory, even as the U.S. economy has stirred back to life.

This sluggishness reflects a sharp shift in the global economy. For decades, going back to the 1960s, Asian economies led by Japan, then South Korea, Taiwan and China, became the world’s factory floor, marshaling cheap labor to propel a wave of exports.

Today, it is unclear whether exports can still provide that oomph. Overall growth is slowing in many Asian nations, forcing policy makers to ponder whether demand from their own consumers can fill the void.

“That model that Asia had of relying on the trade channel—that’s gone,” said Markus Rodlauer, deputy director for Asia and the Pacific at the International Monetary Fund in Washington. 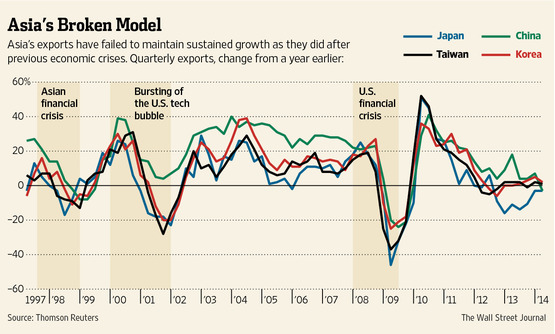 Theories for the shift proliferate. Prominent among them: The U.S. recovery this time is different. In the five years since emerging from recession, growth in all goods and services in the U.S. has averaged just 1.8%, half the pace of the previous three expansions.

The recovery is gathering steam, but is being powered by capital investment in areas like oil-and-gas exploration that don’t rely much on imports…..”

If you enjoy the content at iBankCoin, please follow us on Twitter
2014-04-28
CRONKITE
Share
Previous Why are Syrians Called Freedom Fighters While Ukrainians are Pro Russian Terrorists ?
Next Nestle States Water is Not a Public Right