Should We Worry Over a Triple Top?

That’s because the Dow, in inflation-adjusted terms, is no higher today than it was at the 2000 and 2007 tops. It should give us pause to note that the market — strong as it has been — is only back to the level that turned the market back on two prior occasions.

That puts the market in a “make or break” position. On the one hand, it would be a sign of significant strength if the market were able to break through the “resistance” created by the 2000 and 2007 tops

On the other hand, if the market were to turn down from close-to-current levels — and thereby form a triple top — then it would mean that the market on three occasions had tried, and failed, to break through to higher levels. According to the theory behind technical analysis, that would mean that current levels represent particularly strong resistance — and make it that much harder for the market to break through in the future as well. 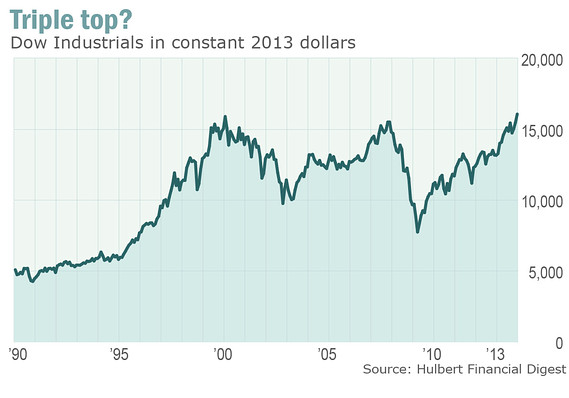 In other words, if you believe in technical analysis, the market is at a very critical juncture.

To be sure, as David Aronson points out, a chart of the inflation-adjusted S&P 500 index tells a slightly different story. Aronson is president of Hood River Research, a firm that employs sophisticated modeling to “enhance the profitability of quantitative investing strategies,” and the recent author (with Dr. Timothy Masters) of “Statistically Sound Machine Learning for Algorithmic Trading of Financial Instruments.” …”