A Look Into Dollar Hegemony

“Despite the quiet nature of things lately from a geopolitical standpoint, coupled with the mainstream media’s obsession with new nominal highs in the various paper indexes, there is definitely turbulence below the surface. There have already been a number of thought-provoking articles written regarding the future of dollar hegemony and the purpose of this week’s piece is to hopefully add to the discussion and stimulate some thought.

The first important thing to remember is that unless one has access to credible inside information, most of what we read is speculation, and most of the commentators will readily admit that. I’m going to do the same thing here. Opinions will be clearly noted and facts will be referenced. Despite the abstract sounding nature of the term, ‘dollar hegemony’ is the paradigm that allows America to do what it is currently doing; namely spending money it doesn’t have on things it doesn’t produce (or need). It is the leverage mechanism that is used globally to politely – and sometimes with extreme prejudice – cajole other nations into doing what is in the Anglo-American banking syndicate’s best interests. The fact that the entire paradigm is a complete fabrication without foundation is lost neither on the powerbrokers that perpetrate the scam, nor the parties the scam is perpetrated on.

The main reason the dollar standard, or dollar hegemony, has lasted so long has been mainly been due to a lack of alternatives. Countries who attempted to stray from the dollar were labeled as enemies (remember the ‘axis of evil’?) and contrived wars were launched or economic sanctions were applied until compliance was achieved. That assertion is mostly fact, part opinion, but when it quacks like a duck and walks like a duck you don’t call it a horse.  However, as the wealth has shifted from America to other parts of the world due to our persistent lack of production, coupled with overconsumption and resulting debt load, alternatives to the dollar standard are beginning to show themselves.

So why spend the time discussing this? Does it really matter to the average person? Absolutely. It couldn’t matter more from a financial standpoint. Every financial transaction you engage in as an economic actor rests firmly on this fraudulent paradigm. Without the dollar standard, your credit cards, paper scrip, and bank accounts would buy nothing. Without the dollar standard, your net worth, minus whatever tangibles you happened to own, would drop to zero, with negative equity because your debts would still exist, just not in dollar form.

That is probably one of the hardest things to grasp – the idea of not using the paper dollar. We’ve become so separated in a time manner from the pre-not-so-USFed era that we’ve lost our bearings on what it is like without the paper dollar. How many people are alive that remember what it was like before 1913? Take it another step back – there is not a person alive today that was alive and aware when the banking panic of 1907 took place. The portion of our population that remembers the great depression is dwindling every day and we ignore those people and their testimonies for the most part. We’re so much smarter now than they were back then, aren’t we? I’ve got news for you: those Americans were tougher than 99% of us today, this author included.

Think of feudalism for a minute if you would. I’ve mentioned that previously in other articles and believe that is the direction we’re headed. Let’s face it; America is not ‘rich’ as the quislings on television would have you believe. We’re broke. Sure we have a bunch of stuff, but it is mostly borrowed from others who now have the power over us. In my opinion, America is little more than a nation that is quickly becoming the land of the fee and the home of the debt slave. This is probably where some of you will choose to stop reading and that’s fine. Whether you believe it or not doesn’t make it any less true and ignoring it won’t make it go away. Believe me, I hate that reality as much as you do, but patriotism is about more than just waving flags and singing the Star Spangled Banner. It is also about taking responsibility, tightening the belt, and cleaning up our messes in the hopes of passing along a country better than the one we received.

Geopolitical Moves to End the Dollar Standard – Destruction from Within

So we’ve had this cushy lifestyle, by and large, since the mid 1980s or so. Madison Avenue had figured out how to remove the stigma of debt servitude and the deals had been cut with the Arabs to create the petrodollar (we buy their oil, they buy our junk USGovt bonds). So things were sort of copacetic with one minor problem; we’d started shedding our industry.  See, we cut a deal (my opinion here) with the Chinese to create what I’ll call the WallyWorld dollar. In exchange for unfettered access to the American consumer, who was by then beginning to be armed with credit cards, the Chinese would also become purchasers of our bonds. One of the necessary steps here was to depreciate the dollar to harm American exports and make the imported junk from China more appealing.

Now maybe this wasn’t an explicit treaty or anything like that, but there was a definite trend shift in trade and monetary policy. The 1990s included a bevy of additional ‘free trade’ agreements that did nothing but further the de-industrialization of America and fuel the industrial revolution in China. This period from the mid 1980s through the end of the millennium also featured significant destruction of the USDollar from a domestic price perspective. According to the USGovt’s delusional consumer price index (CPI), prices rose 57% from 1986 through 2000 (a period of 14 years). According to the newly cooked numbers, they’ve risen an additional 36% from 2000 to the present (almost 13 years), which, as many know, has been one of the most notorious inflationary periods in history even if the BLS insists otherwise.

To put it another way, from 1986 to 2013, the dollar lost around 54% of its purchasing power due to the above and sub-equilibrium interest rates to encourage indebtedness. The less the dollar has purchased, the more EVERYONE has borrowed to fill the gap – from the government to the consumer and every entity in between.

Tying this back to the dollar standard, if you’re one of the parties around the world that uses this currency for your international trade, then how do you feel about it losing its purchasing power in such a manner? You probably don’t like it very much. One of the functions of money is to act as a store of value and the USDollar has become like trying to hold sand between your fingers. The harder you squeeze to hang onto it, the more it slips away. The simpletons in academia and government like to pretend that either a) nobody has noticed this annoying trend, and/or b) they don’t really care or feel they can do anything about it, and/or c) because this is America and we’re just entitled to do whatever we please.

But so far, these are all moves that have served to systematically undermine the dollar standard from within. Well, there are some pretty prominent statesman who said the only way this country would fall would be from within. So maybe those old folks weren’t so dumb after all.

Geopolitical Moves to End the Dollar Standard – Destruction from Without

However, the above only represents half the story – and a very abbreviated version of it at that. There have been a whole raft of agreements over the past half dozen years in particular that have sought to undermine the dollar standard. It is pretty simple how it works. If the dollar is the ‘reserve’ currency, then that creates automatic demand for dollars because countries need to keep a given amount (subject to policy changes and economic conditions) for settling their international trades. As the purchasing power of the dollar has decreased this has increased the demand for dollars because countries needed more to purchase the same amount of goods. This is one of the biggest (and perhaps the main one) reasons the ‘fed’ has been able to get away with its inflationary policies without going into Weimar mode. Couple that with military strong-arm tactics and order has been maintained for the most part – up until now.

Conversely, what more and more countries are doing is cutting deals with other countries and settling the transactions in some other currency – or even gold in some cases. These actions that exclude the dollar reduce aggregate demand for dollars and make it harder for the ‘fed’ to hide its inflationary tactics such as QE. Assisting in that cause is the fact that most other central banks are doing the exact same thing; they’re attacking their own currencies to make them cheap to facilitate exports. As if you can’t have a strong currency AND a strong export base. We might get into that another day, but for now it is a race to the bottom. However, China for one is making a power play. Their gold-buying habits have become very well documented. From the article:

“The increased appetite for gold also reflects rising wealth. China’s rural per capita income in the first nine months of the year jumped 12.5% from a year earlier, while urban per capita disposable income rose 9.5%. In April, when the price of gold fell 14% in two days, Chinese media showed images of women clearing shelves in gold shops.”

The actions of the Chinese demonstrate the huge disconnect in thinking between East and West. But it isn’t rural Chinese buying gold that should concern Americans, it is the actions of the central bank and the deals the country has cut with Russia, Venezuela, and Iran, to name a few, that will impact the future of the dollar standard. 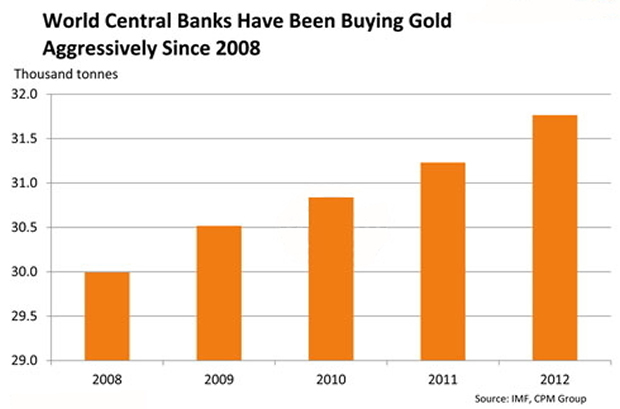 As indicated in the article below, Venezuela is set to start selling the Chinese oil priced in Yuan rather than USDollars. The deals to provide the oil were cut several years ago and at the time myself and many others opined that the trades would eventually be settled in Yuan rather than dollars. That pretty much takes Venezuela off America’s bully list. China will protect her interests as Russia did in the case of running to the side of Syria as the US screamed for war a few months back. Oh, by the way, where is all the outrage from our leaders at the alleged chemical weapons attacks? (emphasis on alleged) Stories rise and fall from the news based on political expediency rather than anything else. If you want backup for that assertion, just go and look up some of the stuff that has gone on in places like Liberia and Mali…..”