The Coming Collapse of China

In the middle of 2001, I predicted in my book, The Coming Collapse of China, that the Communist Party would fall from power in a decade, in large measure because of the changes that accession to the World Trade Organization (WTO) would cause. A decade has passed; the Communist Party is still in power. But don’t think I’m taking my prediction back.

Why has China as we know it survived? First and foremost, the Chinese central government has managed to avoid adhering to many of its obligations made when it joined the WTO in 2001 to open its economy and play by the rules, and the international community maintained a generally tolerant attitude toward this noncompliant behavior. As a result, Beijing has been able to protect much of its home market from foreign competitors while ramping up exports.

By any measure, China has been phenomenally successful in developing its economy after WTO accession — returning to the almost double-digit growth it had enjoyed before the near-recession suffered at the end of the 1990s. Many analysts assume this growth streak can continue indefinitely. For instance, Justin Yifu Lin, the World Bank’s chief economist, believes the country can grow for at least two more decades at 8 percent, and the International Monetary Fund predicts China’s economy will surpass America’s in size by 2016.

Don’t believe any of this. China outperformed other countries because it was in a three-decade upward supercycle, principally for three reasons. First, there were Deng Xiaoping’s transformational “reform and opening up” policies, first implemented in the late 1970s. Second, Deng’s era of change coincided with the end of the Cold War, which brought about the elimination of political barriers to international commerce. Third, all of this took place while China was benefiting from its “demographic dividend,” an extraordinary bulge in the workforce.

Yet China’s “sweet spot” is over because, in recent years, the conditions that created it either disappeared or will soon. First, the Communist Party has turned its back on Deng’s progressive policies. Hu Jintao, the current leader, is presiding over an era marked by, on balance, the reversal of reform. There has been, especially since 2008, a partial renationalization of the economy and a marked narrowing of opportunities for foreign business. For example, Beijing blocked acquisitions by foreigners, erected new barriers like the “indigenous innovation” rules, and harassed market-leading companies like Google. Strengthening “national champion” state enterprises at the expense of others, Hu has abandoned the economic paradigm that made his country successful.

Second, the global boom of the last two decades ended in 2008 when markets around the world crashed. The tumultuous events of that year brought to a close an unusually benign period during which countries attempted to integrate China into the international system and therefore tolerated its mercantilist policies. Now, however, every nation wants to export more and, in an era of protectionism or of managed trade, China will not be able to export its way to prosperity like it did during the Asian financial crisis in the late 1990s. China is more dependent on international commerce than almost any other nation, so trade friction — or even declining global demand — will hurt it more than others. The country, for instance, could be the biggest victim of the eurozone crisis.

Third, China, which during its reform era had one of the best demographic profiles of any nation, will soon have one of the worst. The Chinese workforce will level off in about 2013, perhaps 2014, according to both Chinese and foreign demographers, but the effect is already being felt as wages rise, a trend that will eventually make the country’s factories uncompetitive. China, strangely enough, is running out of people to move to cities, work in factories, and power its economy. Demography may not be destiny, but it will now create high barriers for growth.

END_OF_DOCUMENT_TOKEN_TO_BE_REPLACED

You laughed, you mocked, and you said never…..

Panic is ripe and in ample supply…

END_OF_DOCUMENT_TOKEN_TO_BE_REPLACED

Damn…let’s hope they are wrong as the fund predicts a decade of slow growth and high unemployment.

END_OF_DOCUMENT_TOKEN_TO_BE_REPLACED

Unfortunately, All Efforts to Prevent Civil War in Syria Have Failed

Mon Jan 2, 2012 8:49pm EST Comments Off on Unfortunately, All Efforts to Prevent Civil War in Syria Have Failed

The Arab League was a hopeful opportunity to quell violence in Syria; they have now conceded to failure.

END_OF_DOCUMENT_TOKEN_TO_BE_REPLACED

Oil Prices Expected to Slip a Little Based on Futures Contracts

Mon Jan 2, 2012 8:38pm EST Comments Off on Oil Prices Expected to Slip a Little Based on Futures Contracts

Lower growth is expected to take oil down in the first half of the year.

END_OF_DOCUMENT_TOKEN_TO_BE_REPLACED

This was the second recorded decrease in the past few quarters.

END_OF_DOCUMENT_TOKEN_TO_BE_REPLACED

Iran Shows Off its Rod

END_OF_DOCUMENT_TOKEN_TO_BE_REPLACED 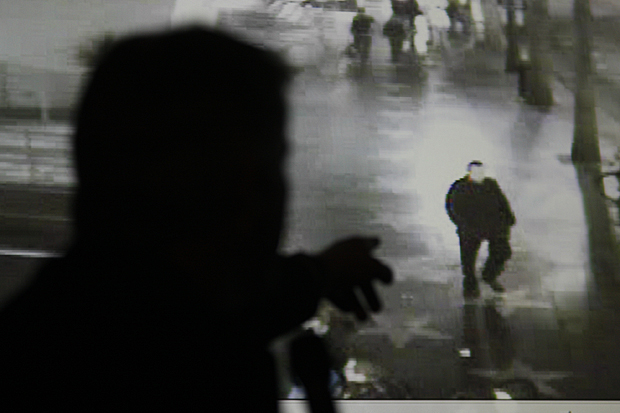 Los Angeles police this morning detained and are questioning a “person of interest” in the spate of arson fires occurring around the city since Friday.

The individual, believed to be the man seen in a video police released Sunday in connection with the case, was detained near Sunset Boulevard this morning, according to an LAPD source familiar with the investigation.

However, in a statement, a Los Angeles fire official said that “it is too early to speculate if this person is responsible for the spree of arson fires.”

The detention follows an early-morning frenzy of arson fires across the Hollywood area on Monday. Eleven fires were reported in two hours, beginning at 1:30 a.m., most to cars and carports in apartment complexes, police and fire officials said.

It was unclear early Monday if the fires were connected to a string of arsons in the Hollywood area.

Officials said Sunday that they have linked at least 39 fires to those arsons, which began Friday morning.

They declined to say what evidence tied the cases together or to give more information about how the fires were set. Law enforcement sources told The Times that detectives were concerned that releasing more information could prompt the arsonist or arsonists to change tactics and could encourage copycats.

An image of a “person of interest” was caught on a video that showed a car fire Saturday night inside the parking structure of the Hollywood & Highland complex on Hollywood Boulevard.

Suspect arrested in string of fires

END_OF_DOCUMENT_TOKEN_TO_BE_REPLACED

Experts say it could happen again, but since nobody knows why it happened it is similar to predicting a volcanic eruption of sorts.

END_OF_DOCUMENT_TOKEN_TO_BE_REPLACED

The ECB Steps Up Bond Purchases

END_OF_DOCUMENT_TOKEN_TO_BE_REPLACED

Mon Jan 2, 2012 12:05pm EST Comments Off on After Five Months of PMI Declines in Europe It is Unlikely They Will Avoid Recession

Europe’s bourse’s experienced a rally off better than expected manufacturing data, but the trend has been consistently down for more than a quarter. Some analysy expect it will be hard to avoid recession. We on the other hand may just pull through.

END_OF_DOCUMENT_TOKEN_TO_BE_REPLACED

Just as president Obama signs new sanctions against Iran, they decide to provide the west with a dual message….talk or walk. Iran in one move test fires a new missile why stating they want to talk about their nuclear program and most likely the sanctions their will hurt their oil export.

Let us all pray none of this escalates any further.

END_OF_DOCUMENT_TOKEN_TO_BE_REPLACED

A Look at Commodity Performance and This Years Expectations

Mon Jan 2, 2012 11:51am EST Comments Off on A Look at Commodity Performance and This Years Expectations

END_OF_DOCUMENT_TOKEN_TO_BE_REPLACED

Some Asian markets and all of Europe had a great first day of trade for 2012.

END_OF_DOCUMENT_TOKEN_TO_BE_REPLACED

From Accuracy in Media’s Logan Churchwell:

With the first legitimate event of the 2012 Republican presidential primary just days away in Iowa, the Associated Press today offered a clear example of hatchet jobs to come for the candidates. Mitt Romney was given an early example of what the AP means by “journalism with voice.”

I previously raised concerns over a leaked memo from AP Managing Editor Mike Oreskes two weeks ago. Charging all journalists to use the said “voice,” he did not offer any examples but, rather very contradictory directions (emphasis added):

“We’re going to be pushing hard on journalism with voice, with context, with more interpretation. This does not mean that we’re sacrificing any of our deep commitment to unbiased, fair journalism. It does not mean that we’re venturing into opinion, either. It does mean that we need to be looking for ways to be more distinctive and stand out in the field — something our customers need and want. The why and the how of the news are as crucial as the who, what, when and where.”

The AP offered a very clear example this morning for how these directions will be executed.

END_OF_DOCUMENT_TOKEN_TO_BE_REPLACED

Mon Jan 2, 2012 10:44am EST Comments Off on Austerity Reigns Over Euro Zone as Crisis Deepens

“Every government in Europe with the exception of Germany is bending over backwards to prove to the market that they won’t hesitate to do what it takes,” said Charles Wyplosz, a professor of economics at the Graduate Institute of Geneva. “We’re going straight into a wall with this kind of policy. It’s sheer madness.”

END_OF_DOCUMENT_TOKEN_TO_BE_REPLACED

Among 40,000 signed bills: No happy hours in Utah, safer golf carts in Georgia

END_OF_DOCUMENT_TOKEN_TO_BE_REPLACED

On Friday investors put the old year to bed, and looked for signs as they anticipated what the baby new year might bring.

Considering the market had been trading on technicals in 2011, the Fast Money pros suggest watching the charts carefully again in 2012.

And Bespoke recently noted a pattern that the Fast pros thought was very significant.

], the 50-day moving average has started to break above the 200-day; something known on the Street as a Golden Cross.